Death on the job at UPS

A Local 705 Teamster at UPS's CACH facility describes how conditions turned deadly this summer--and the campaign to hold the company responsible.

Stephen was a 44-year-old Teamster and a Marine Corps veteran of the Gulf War. According to various reports, Stephen requested to leave work early because he wasn't feeling well, but his request was denied. The heat index in the Chicago area was over 109 degrees. Inside the trailers, where many of us work, it was much hotter.

Two days before Stephen's death, another worker passed out in a trailer. This was one of many personal accounts of workers succumbing to the heat.

Someone called the Occupational Safety and Health Administration about the incident, and the next day, an OSHA representative came to UPS CACH. She was denied entry by UPS management for five hours during the peak temperatures. When she was finally permitted inside the building, the temperature measured inside the trailers was approaching 130 degrees!

UPS management prides itself on the intense pace it tries to force on us. Inside the state-of-the-art facility is a vast network of conveyor belts that move over a million packages a day. Computers divert the boxes down chutes at a rate that at times can exceed 2,000 boxes an hour. 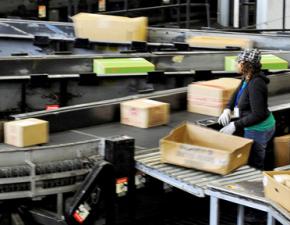 A worker can load between 800 to more than 1,500 boxes on a four-hour sort. Some unlucky ones do even more than that. When the heat is over 100 degrees in the trailers, work becomes a struggle for survival.

Although CACH has the most modern 21st century technology, when it comes to the actual manual labor, it is far closer to the 19th century.

UPS management has a blame-the-worker approach to safety. It is up to the worker to drink enough fluids, not for management to provide a safe, cool workplace. We're expected to keep up the pace no matter how hot it is. And if we do get hurt, as so often happens, management claims that it is our fault no matter what.

The building has only a few fans for a facility that has more than 1,000 trailer bays. Yet managers' offices are fully air-conditioned. Sometimes, the offices are so cold that office employees have to wear sweaters.

MANAGEMENT HAS willfully ignored Stephen Michel's death. According to some supervisors, they have been told not to talk about Stephen's death. Many workers agree with the assertion that management has intimidated witnesses to keep quiet and not talk to Local 705 Teamster representatives about the events surrounding Stephen's death.

Some rank-and-file Teamsters, angry about our bosses disregard for our lives, have put together a petition that quotes the preamble from article 18 of our contract about safety, "The Employer and the Union agree that the safety of the employees and the general public is of utmost importance."

The rest of the petition states:

The recent death of our Teamster union brother Stephen Michel and recent cases of heat-related injuries among many other workers at CACH needs to be immediately addressed by management. We, the workers at UPS CACH, demand adequate cooling of the whole facility, including inside the trailers, and the right to take breaks whenever needed to avoid heat exhaustion.

We also demand an investigation and report into the death of Brother Stephen Michel and others who have been injured due to management's criminal neglect.

Management must respect our right to safety at work because so far they have disregarded that right.

Over 170 workers have now signed that petition.

The petition has had an immediate impact. Recently, the coroner has reversed his ruling. Initially, the cause of death was determined to be non-heat related. Now, the report states that Stephen Michel's death was a workplace accident, and heat was a contributing cause of death.

This is a step forward in our fight at UPS.

We demand justice for Stephen Michel and his family, and any other worker injured during the recent heat wave. We demand a safe workplace that is properly cooled and where we are treated with respect. And we won't let management treat us like replaceable machine parts.