What do we mean by exploitation?

THE TERM "exploitation" often conjures up images of workers laboring in sweatshops for 12 hours or more per day, for pennies an hour, driven by a merciless overseer. This is contrasted to the ideal of a "fair wage day's wage for a fair day's work"--the supposedly "normal" situation under capitalism in which workers receive a decent wage, enough for a "middle class" standard of living, health insurance and security in their retirement.

Sweatshops are horrific examples of exploitation that persist to this day. But Karl Marx had a broader and more scientific definition of exploitation: the forced appropriation of the unpaid labor of workers. Under this definition, all working-class people are exploited.

Marx argued that the ultimate source of profit, the driving force behind capitalist production, is the unpaid labor of workers. So for Marx, exploitation forms the foundation of the capitalist system.

All the billions in bonuses for the Wall Street bankers, every dividend paid to the shareholders of industrial corporations, every dollar collected by capitalist landlords--all of this is the result of the uncompensated labor of working-class people. And because exploitation is at the root of capitalism, it follows that the only way to do away with exploitation is to achieve an entirely different society--socialism, a society in which there is no tiny minority at the top that rules. 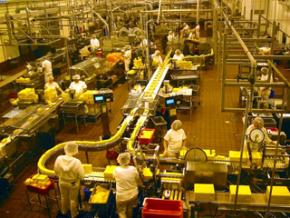 EXPLOITATION IS not unique to capitalism. It has been a feature of all class societies, which are divided into two main classes, an exploited class that produces the wealth and an exploiter class that expropriates it.

Under slavery, exploitation is naked and obvious to exploiter and exploited alike. The slave is forced by sword and lash to work for the master, who provides just enough to keep the slave alive--all the rest of the fruits of their labor are forcefully appropriated by the slaveowner.

Similarly, under feudalism as it arose in its classical form in Europe, the serfs work on a plot of land that belongs to the lord. They work for part of the time for themselves, producing their means of subsistence, and the rest of the time, the product belongs to the lord. The terms of exploitation are clear to serf and lord alike--the serf labors for the lord, and receives nothing from the lord in return.

Capitalism is different among the chief forms of class societies Marx examined in that the exploitative nature of labor is hidden by the wage system. Except in cases of outright fraud, workers are hired, labor for a given amount of time and receive a wage in return. It appears on the surface that an equal exchange has taken place--but this isn't the case.

Why not? The capitalist, in addition to purchasing various inputs into the productive process--machinery, raw materials, etc.--also buys what Marx called "labor-power," increments of workers' time during which the capitalist controls the workers' creative and physical energies.

Under capitalism, most needs are met, at least for those who can afford them, by commodities--commodities being goods and services produced for sale on the market. Working-class people, who don't own the means to produce and sell commodities, have one commodity they can sell: their labor-power, their ability to work. In this way, workers are forced to sell themselves to some capitalist piecemeal in order to acquire money to buy the necessities of life.

Labor-power, according to Marx in writing his first volume of Capital, is "the aggregate of those mental and physical capabilities existing in the physical form, the living personality, of a human being, capabilities which he [or she] sets in motion whenever he [or she] produces a use-value of any kind." In other words, labor-power is the capacity to work, to create value, which the worker sells to the capitalists in increments for a wage.

Labor, on the other hand, is the actual process of work itself. Like the buyer of any commodity, the capitalist claims the right to consume the commodity they purchase. In this case, the consumption of labor-power consists of the control of the labor process and the ownership of the products workers create during it.

According to Marx's analysis, unlike machinery, raw materials and other inanimate inputs that pass on their value to the product but create no new value, labor-power is a "special commodity...whose use-value possesses the peculiar property of being a source of value." In other words, workers produce new value contained in the final product, which belongs to the capitalist.

The distinction between "labor-power" and "labor" is the key to understanding exploitation under capitalism.

When a capitalist pays a worker a wage, they are not paying for the value of a certain amount of completed labor, but for labor-power. The soaring inequality in contemporary society illustrates this--over the past three decades of neoliberalism, the wealth that workers create has increased, but this has not been reflected in wages, which remain stagnant. Instead, an increasing proportion of the wealth produced by workers swelled the pockets of the superrich, who did not compensate the workers for their increased production on the job.

CAPITALISTS PURCHASE labor-power on the market. In general, the wage--the price of labor-power--is, like all other commodities, determined by its cost of production, which is in turn regulated by struggles between workers and capitalists over the level of wages and benefits, and by competition between workers for jobs.

As Marx wrote in Wage Labor and Capital, the cost of production of labor-power is "the cost required for the maintenance as the laborer...and for his [or her] education and training as a laborer."

So in Marx's generalized analysis, the level of wages depends on what it takes to keep workers and their families (who represent the next generation of workers) alive and able to work--with their standard of living affected by the outcome of class struggles between workers and capitalists.

The crucial point is that the cost of wages or labor-power depends on factors completely independent of the actual value produced by workers during the labor process. This difference is the source of "surplus value," or profit. So let's compare the price of labor-power to the value, expressed in price, of the commodities that workers creates through their labor.

To take a simple example, let's assume that a worker is able to produce in four hours new value that is equivalent to the value of their labor-power for the day--to, say, $100 in wages. Marx called this "necessary labor," because it is the amount of labor required to replace the wages paid by the capitalist, and because if the worker labored independently and not for a capitalist, it would be "necessary" for them to work four hours to maintain their standard of living.

If it was a matter of "a fair day's pay for a fair day's work," workers ought to be able to go home after four hours of labor. In our example, the capitalist is paying them $100 for the workday, and the worker produced $100 worth of new value in the form of products that belong to the capitalist, which they can sell on the market to recoup what they spent on wages and other costs of production.

But things don't work this way under capitalism. As Marx wrote in a pamphlet called Value, Price and Profit, "By buying the daily or weekly value of the laboring power of the [worker], the capitalist has, therefore, acquired the right to use or make that laboring power during the whole day or week."

Hence, the worker, in order to receive a wage equivalent to the value they produce in four hours, is forced by the capitalist to work longer--a total of, in our example, eight hours. The value created during the additional four hours, embodied in the products produced by the worker during that time, is what Marx called "surplus value."

When this surplus product is sold, the capitalist pockets the proceeds--this, according to Marx, is the secret to the source of profits. And it's not only industrial capitalists whose profits derive from surplus value, or unpaid labor. The "rentier" classes, such as finance capital and landlords, take their cut from the wealth extracted from the labor of workers in the form of interest on loans to the industrial capitalists and to others in society, rent for factories and homes, and so on.

Exploitation forms the basis of all the profits shared among the entire capitalist class. It is not simply the case that the wealthy have a lot while workers have little; capitalists accumulate wealth through a system of organized theft from the working class.

AN UNDERSTANDING of the basics of Marx's theory of exploitation helps to explain the different forms of struggles between workers and capitalists. To take a few examples (although there are many more):

Most importantly, Marx's theory of exploitation reveals that because the source of capitalists' wealth is the unpaid labor of workers, the interests of workers and capitalists--like slave and master or serf and lord before them--are diametrically opposed and are impossible to reconcile. The two will always come into conflict since capitalists can only increase their share of the wealth at the expense of workers, and vice versa.

Workers have to struggle to decrease the severity of the exploitation they face under capitalism. But as long as the capitalist system exists, workers will be exploited, and their unpaid labor will remain the source of the profits that are the lifeblood of the system.

Therefore, Marx concluded that the only way for workers to control the wealth they create and use it to meet their needs was under a different system altogether. As he wrote in Value, Price and Profit, "Instead of the conservative motto 'A fair day's wages for a fair day's work!' they ought to inscribe on their banner the revolutionary watchword: 'Abolition of the wages system!'"

According to Marx, only when workers control the means of production for their own benefit can exploitation be abolished--only then will "the expropriators [be] expropriated."