How did the first party of U.S. capitalism come to be dominated by these creeps?

AFTER MONTHS of media buildup, a few thousand Iowa Republicans will caucus on Tuesday, January 3, to select delegates for the Republican convention in August. And because of the bizarre structure of the U.S. electoral system, they will have an outsized voice in determining the next president.

The outcome of the caucuses was unclear beforehand, but recent opinion polls suggested candidates Mitt Romney, Ron Paul and Rick Santorum would likely be the top finishers--though none are expected to get more than a quarter of the votes of caucus-goers.

Despite the fact that it would be hard for anyone to claim popular support based on winning a minority of votes from the tiny number of people who go to the caucuses, the media hype machine will go into overdrive, and the winning candidate--no matter how narrow the margin--will likely get a leg up in the next primary contests to decide the Republican presidential candidate. And because of the sad state of the economy alone, whoever the Republicans choose has to be seen as a serious challenger against Barack Obama in November.

Indeed, Rick Santorum, the right-wing former U.S. senator from Pennsylvania, was at the bottom of the pack until the final days before the caucuses, when a "surge" in support gave him the real possibility that he could claim the top spot. Ron Paul, meanwhile, has his own strong base of support among Iowa conservatives who are undeterred by the libertarian's history of consorting with racists and neo-Nazis.

If Santorum or Paul succeed in pushing the presumed frontrunner Romney from the top spot, the media will make much of this "stunning" rebuke. Nevertheless, most the media chatter can be discounted.

In the past two decades, the Iowa caucuses, which are dominated by Christian conservatives, have propelled right-wingers like Pat Robertson, Patrick Buchanan and Mike Huckabee--none of whom turned out to be the eventual presidential nominee. As Politico's Roger Simon wrote, "[T]he Iowa caucuses do not pick winners as much as they eliminate losers. And the Iowa caucuses Tuesday are likely to eliminate from serious contention the only two men who might have blocked Romney's path to victory: Newt Gingrich and Rick Perry." 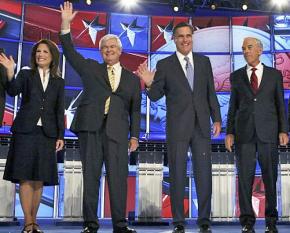 So even if Romney gets a bloody nose in Iowa, he looks set to sweep the January 10 primary in New Hampshire, setting up contests in South Carolina and Florida that could hand him the nomination by February.

SINCE THE Republican primary began in earnest in the summer of 2011, Romney has mostly posed as the frontrunner, while one conservative challenger after another--from Rep. Michele Bachmann, to Texas Gov. Rick Perry, to pizza CEO and sexual harasser Herman Cain, to former House Speaker Newt Gingrich--have, like Santorum and Paul, experienced "surges" that brought them close to Romney in the polls. But each one of them flamed out after a few days or weeks in the media spotlight.

The Republican electorate's short-lived flirtation with a series of far-right (and some seriously kooky) candidates showed that hard-core conservatives weren't that enamored with the blow-dried and ideologically malleable Romney. At the same time, elite Republican operatives tried unsuccessfully to "draft" figures like New Jersey Gov. Chris Christie into the race.

A Martian transported into the middle of one of the innumerable Republican debates last year would have had to wonder what planet the debaters were from. At each debate, the candidates seemed to go out of their way to stake out the most extreme conservative position.

In the midst of the gravest economic crisis in 70 years, where half of Americans have fallen into poverty or are hovering just above it, the Republican "debate" careened from peddling snake oil (Herman Cain's regressive "9-9-9" tax plan) to highlighting far-right positions on social issues (Perry's pledge to reinstate the ban on gays in the military) to bashing immigrants and poor people (Gingrich's endorsement of child labor).

How did the main political party of American business find itself hijacked by such kooks?

To the one-quarter or so of American voters who fit into the hard conservative side of the electorate, most of these positions aren't kooky at all. They're standard-issue talking points repeated often on conservative talk radio and Fox News. When GOP debate audiences cheered Rick Perry for his record of executions or booed a gay service member, it was a reminder that the economic crisis has polarized the electorate on the left and the right.

Much of the drama in the lead-up to the Iowa caucus was about which right-winger would get the votes of the Republican base and become the "not Romney" candidate in the race. But that doesn't change the fact that Romney is the only person in the Republican field who has the money and support network to run a national campaign.

In the same way that "antiwar" Democrats like Howard Dean and Rep. Dennis Kucinich helped to corral the anti-Iraq war vote for the pro-war Democrat John Kerry in the 2004 presidential election, the "extreme" Republican candidates will help to fire up the GOP's most committed voters--but will deliver them to line up behind Romney if he becomes the party's nominee.

If and when a Romney-Obama race comes into view, the Republicans won't have any trouble getting most conservatives to support Romney. "I don't think there's going to be some sort of stop-Romney movement in any way, shape or form," conservative strategist Greg Mueller told Politico. "The Obama fear factor is going to rise to the top here pretty soon."

Obama's recent increase in popularity aside, the Republicans know that Obama is a vulnerable incumbent. Having presided over a jobless, anemic recovery from the depths of the crisis, the Obama administration has lost the benefit of the doubt with majority of the country. Obama's actions in office have dampened the enthusiasm of millions who voted for him in 2008 with expectations of "change." So the Republicans have a good shot at winning the presidency if they can nominate a semi-credible candidate.

JUDGED BY his boatloads of money and high-level endorsements from Republican politicians and apparatchiks, Romney has to be considered the favorite to be that candidate.

For months, until he faced what appeared to be a serious challenge from Gingrich, Romney ran a "frontrunner" campaign, aiming his fire at Obama's economic policies while letting the rest of the candidates squabble among themselves. Then, when Gingrich's standing in the polls rose for a brief few weeks, Romney's SuperPAC Restore Our Future unleashed a barrage of negative ads against Gingrich. After outspending Gingrich by 8-to-1, Romney regained the lead in Iowa.

Romney also projects himself as the most "electable" of the Republican contenders, given that he was once the governor of "deep blue" Massachusetts. He has tried to maintain a "presidential" image as a contrast to the more overt right-wing candidates like Bachmann or Perry.

But those who are tempted to see in Romney a moderate, technocratic alternative to Obama (and to the rest of the clowns in the Republican field)--conservative, but not crazy--should remember that George W. Bush ran as a "moderate" in 2000, too.

Not only has Romney taken pains to abandon more liberal positions on abortion and LGBT rights that he held when he was running for governor and U.S. Senate in Massachusetts, he has even tried to curry favor with the far right. For instance, just before New Year's Day, he pledged to veto the DREAM Act--legislation intended to provide some undocumented youth with educational opportunities and a path to citizenship.

Romney, who grew up in the wealthy household of former American Motors Corp. executive and Michigan Gov. George Romney and who is worth somewhere around $250 million, will sell himself as a "businessman" who "knows how to create jobs." We're supposed to forget that he made most of his money from the Bain Capital Management hedge fund, which specialized in corporate buyouts and "turnarounds" that cost thousands of jobs.

Over the past three years, Barack Obama has been replacing our merit-based society with an Entitlement Society. If we continue on this course for another four years, we may pass the point of no return. We will have created a society that contains a sizable contingent of long-term jobless, dependent on government benefits for survival. Government dependency can only foster passivity and sloth.

So in spite of the fact that the bloated financial sector crashed the economy--and survived only due to trillions of taxpayer dollars--Romney is campaigning against the measly social spending that stands between millions of Americans and poverty.

Writing in the New York Times, Thomas B. Edsall noted that there's a not-so-subtle racial undertone to this appeal to cut Americans loose from "government dependency" and to stigmatize all social spending as "welfare."

Romney's rhetoric is crafted to appeal pretty broadly across the right end of the political spectrum--from the racists who think that Obama is a Kenyan-born socialist to the garden-variety "small government" conservatives and libertarians.

Will this work as a general election appeal? Salon.com columnist Glenn Greenwald thinks not, especially when they're running against a president who continued George W. Bush's bank bailout and who has "normalized" as part of the bipartisan consensus the most extreme measures of Bush's "war on terror";

In fairness to the much-maligned GOP field, they face a formidable hurdle: how to credibly attack Obama when he has adopted so many of their party's defining beliefs. Depicting the other party's president as a radical menace is one of the chief requirements for a candidate seeking to convince his party to crown him as the chosen challenger. Because Obama has governed as a centrist Republican, these GOP candidates are able to attack him as a leftist radical only by moving so far to the right in their rhetoric and policy prescriptions that they fall over the cliff of mainstream acceptability, or even basic sanity.

Greenwald may be right. But in an election year with many unknowns--especially about the course of the U.S. economy--it's too early to know what will be considered "mainstream" by the time November rolls around.