Elizabeth Schulte explains what the Republicans' voter ID laws are really about.

MORE THAN a million people in Pennsylvania alone might not get to vote in November if a new voter ID law goes into effect in that state.

They won't be alone, because voter ID laws--which require that voters show a photo identification in order to cast a ballot--are spreading from state to state, sponsored by Republican lawmakers who claim they're preventing "voter fraud."

But the only thing these laws are preventing is Black and Latino people's right to vote.

Some 32 states have some form of voter ID law on the books right now. But if it makes it through a court challenge this month, Pennsylvania will be the most restrictive yet.

So was there an epidemic of stuffed ballot boxes or fraudulent registrations in Pennsylvania's recent elections? Nope. There have been no incidents or investigations of in-person voter fraud in the past, according to state officials themselves.

In Wisconsin, where Gov. Scott Walker is trying to pass a voter ID law, an investigation of the 2004 elections revealed just seven substantiated cases of individuals knowingly casting invalid votes. That's a rate of 0.0002 percent for the state. And each of these seven cases were people with felony convictions who were attempting to vote when they were banned from doing so--something a photo ID law probably wouldn't have stopped. 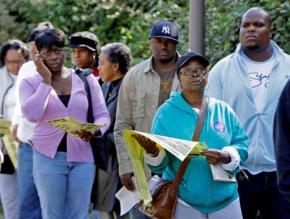 Clearly the Republicans will stop at nothing. They will lie, cheat and, yes, steal to win elections.

How many people will be affected if the Pennsylvania proposal becomes law? Estimates run anywhere from half a million, according to the Brennan Center for Justice, to as high as 1.6 million. According to an investigation by the City Paper, 437,237 people, or 43 percent of city voters, may not have the proper ID to vote under the law.

A valid photo ID can be difficult to obtain, especially for people who don't have financial resources. The Pennsylvania law requires documentary proof of citizenship, a Social Security card and proof of address to get a photo ID. According to a study by Matt Barreto, director of the Washington Institute for the Study of Ethnicity, Race and Sexuality, who is testifying against the Pennsylvania law in court: "Among eligible voters who currently lack a valid ID, 27.6 percent do not have at least one of the three required underlying documents needed to obtain a valid photo ID."

Viviette Applewhite, the 93-year-old lead plaintiff in the case initiated by the ACLU and NAACP against the Pennsylvania law, says she can't come up with the documentation she needs in time for the election. After 50 years of voting, the African American grandmother could be barred from taking part in voting because she no longer has the official papers she needs after her purse was stolen.

ACCORDING TO the Brennan Center for Justice, in the 10 states with the most restrictive voter ID laws (Alabama, Georgia, Indiana, Kansas, Mississippi, Pennsylvania, South Carolina, Tennessee, Texas and Wisconsin), more than 10 million eligible voters live more than 10 miles from the nearest office that provided IDs and was open more than two days a week. That's a hardship for voters without access to transportation.

The Brennan study found that:

1.2 million eligible Black voters and 500,000 eligible Hispanic voters live more than 10 miles from their nearest ID-issuing office open more than two days a week. People of color are more likely to be disenfranchised by these laws since they are less likely to have photo ID than the general population.

The Center emphasized the difficulties imposed by the cost of obtaining the documentation needed to obtain the ID, concluding:

Stealing the minority vote is hardly a new idea for Republicans. In 2000, the disenfranchisement of African American voters in Florida delivered a narrow 537-vote victory for Republican George W. Bush. According to a Civil Rights Commission report released in June 2001, this was a premeditated act orchestrated by Florida officials, including George W. Bush's own brother.

Two years before the 2000 election, Gov. Jeb Bush authorized a purge of "possible" and "probable" felons from voter registration lists. Blacks made up 44 percent of the list of 58,000 people who were purged, many of them without cause. Then, after the Black votes were stolen, the U.S. Supreme Court ruled against a full recount of ballots in an election that Bush barely won. Al Gore conceded, and Bush became president.

The GOP has plenty of other tricks to disenfranchise the most vulnerable--like attacking groups that work to make voting more accessible. A right-wing campaign against Association of Community Organizations for Reform Now, or ACORN--claiming among other things that the group's volunteers engaged in "voter fraud" during the 2008 election--forced a grassroots community organization that provided invaluable assistance to millions of poor people to shut down in 2010.

WITH A new set of restrictive voter ID laws, the right to vote could become an illusion for millions of people this year. Democrats are leading the opposition to these reactionary laws for the obvious reason that they mainly affect the party's loyal supporters.

But even without voter ID laws, millions of people have had the ballot stolen away from them, and with almost no complaint at all from Democrats--because of punitive laws aimed at potential voters with felony convictions.

Some 5.3 million Americans with felony convictions--and in several states, with misdemeanor convictions--are barred from voting. Of those, most were convicted of nonviolent offenses, and 39 percent have fully completed their sentences, including probation and parole. More than 1.4 million of the disenfranchised are African American. According to the ACLU, "In 11 states, you can lose your right to vote for life."

Fifty years ago, civil rights activists stood up, risking their lives in the face of racist vigilantes, to win the right to vote. They took on poll taxes, literacy tests and racist harassment and intimidation at voting stations. Their activism put a nail in the coffin of Jim Crow segregation in the South.

Recently, civil rights and immigrants rights activists have begun organizing solidarity actions to take on the right-wing attack on the right to vote. They are part of the movement against the new Jim Crow--with a call for the right for every person's vote to be counted, whether they have been a victim of the criminal justice system, whether they are undocumented, and whatever the color of their skin.