Donald Trump is so despicable that no one is paying attention to what Hillary Clinton actually stands for. Elizabeth Schulte and Alan Maass think that should stop.

DONALD TRUMP proved once again in the final presidential debate that he's the secret weapon...of the presidential campaign of Hillary Clinton.

The nominee of what was once the leading party of American capitalism again went out of his way to piss off even Republicans who haven't retracted their endorsement of him.

His own running mate repudiated his unhinged nonsense about the election being rigged against him--so Trump insisted Wednesday night that he couldn't promise to abide by the results of the election. The audiotape of him bragging about sexually assaulting women has repulsed women voters especially, so Trump sneered about every allegation--and nonchalantly acknowledged that as president, he would pack the U.S. Supreme Court with right-wing justices who would overturn legal abortion.

We're in uncharted territory--it's entirely possible that Donald Trump will do worse on November 8 than any major-party candidate in modern political history.

But maybe even more incredible is the fact that the other major-party candidate on the ballot in three weeks' time could be setting records herself if her opponent wasn't Donald Trump. 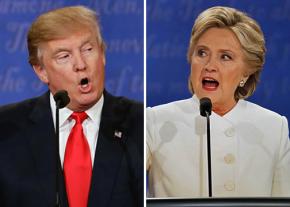 As repellant as he is, lots of people seem ready to choose interstellar catastrophe over voting for Hillary Clinton. A recent poll of 18- to 35-year-olds inspired by the Twitter hashtag #GiantMeteor2016 found that one in four young respondents would rather a giant meteor destroy the Earth than see either Donald Trump or Hillary Clinton in the White House.

The public demonstrations of hatred toward Trump are heartening--anti-sexist protesters in New York City and Chicago chanting "Pussy grabs back!" outside Trump skyscrapers, and culinary workers building their own "wall" of taco trucks at a Trump hotel near the debate site in Las Vegas.

But at the same time, every new outrage involving Trump means people pay less attention to the outrages of a Democratic presidential nominee whose top staff responded to the critique of a Black Lives Matter activist with the single word "Yuck," as we know thanks to WikiLeaks.

The Democrats have happily stood silent while Trump's gross behavior sets the terms of the debate. Clinton could easily take over the spotlight from Trump and challenge his reactionary bluster. But she's infinitely more confortable with a campaign centered on how much she's not like her opponent, rather than what she stands for.

You've probably heard from any number of Clinton supporters--your friends, your family, fellow unionists, members of the feminist organization you support--that this election isn't about voting for what you believe in, but against what you definitely don't believe in.

But each time the Trump campaign lurches and careens to the right, it takes the heat off the Clinton campaign to defend its candidate's agenda.

So let's take a break from the regularly scheduled Trump train wreck and talk about what Hillary Clinton and the Democratic Party ought to be held accountable for. You heard about some of it in the debate last night, but if the Clinton campaign has its way, you won't hear much more before November 8--as long as Trump cooperates with his ongoing horror show.

A Friend of Immigrants in the White House?

Immigration came up in the debate last night, but for anyone who cares about the issue, it wasn't much of a discussion--especially after Hillary Clinton avoided a question about free trade and borders by blaming the Russkies for hacking her e-mails again.

Clinton could have called out Trump's deplorable racism. He began his campaign by calling Mexicans immigrants "rapists" and vowing to build a border wall. His latest xenophobia includes a promise to institute "extreme vetting" on Muslims who want to enter the U.S.

But let's stick to our theme today: What about Clinton?

On enforcement, Clinton joins Republican and Democratic politicians alike in calling for tougher border controls. In 2013, she supported legislation that included a path to citizenship, as she said in the debate--but on the condition that billions of dollars be devoted to new surveillance equipment and fencing (otherwise known as a wall) along the Mexican border, along with 20,000 more border agents.

The consequences of these policies are deadly. Since January, officials say that fewer people attempted to illegally cross the border between the U.S. and Mexico, but more have died trying to make the journey. According to the Pima County medical examiner in Arizona, 117 bodies have been recovered along migration routes in southern Arizona so far this year, an increase over last year.

This is the true face of Clinton's promise to "protect our borders"--death and misery for people fleeing persecution and poverty.

Clinton supporters focus on the nightmare of a Trump presidency for immigrants. But the nightmare is already happening. Trump may have blustered about the actual number, but it's true that Barack Obama has presided over the deportation of well over 2 million people, more than all the presidents of the 20th century combined.

And forfeiting immigrant lives in the name of border security is hardly unique to the latest Democrat in the White House. It was Bill Clinton who imposed "Operation Gatekeeper" in 1994, pandering to the right wing by pouring more millions into border enforcement and, yes, wall-building.

Okay, okay, the real news story is how WikiLeaks got hold of e-mails from Clinton campaign chair John Podesta and transcripts of Clinton's paid speeches, not what was in them. Clinton herself said the most important question of the final debate was whether Trump would condemn Russian espionage to hack her e-mails.

But hey, bear with us.

It's not news that Clinton has deep ties to Corporate America going back decades. But with Clinton touring the country and telling her supporters that America is "already great," it's worth remembering who America is really great for.

In a speech at Goldman Sachs three years ago, Clinton did everything but apologize for the weak banking regulations imposed in the 2010 Dodd-Frank financial reform bill. "More thought has to be given to the process and transactions and regulations so that we don't kill or maim what works, but we concentrate on the most effective way of moving forward with the brainpower and the financial power that exists here," Clinton pandered to an audience of banksters.

Explaining that Dodd-Frank bill was passed for "political" reasons, Clinton assured the investment bank aptly referred to in 2010 as "a giant vampire squid wrapped around the face of humanity" that she believes the best overseers of Wall Street are...wait for it...Wall Street itself.

"There's nothing magic about regulations--too much is bad, too little is bad," Clinton said, and one assumes that she emphasized the "too much is bad" part.

For all the working-class families who bore the burden of underwater mortgages during the housing crisis, Clinton has signaled, if anyone was still wondering, whose side she's on--the parasites on Wall Street.

The Return of Roe

Remember reproductive rights? It was pretty shocking to hear the words "abortion" or "Roe" and "Wade" uttered in last night's debate. So far this election, we've heard precious little about this essential health care question for women.

It's not for a lack of things to talk about--Texas shuttering its clinics becaue of punitive legislative restrictions, an Indiana woman facing murder charges for having a miscarriage, congressional Republicans smearing Planned Parenthood with fabricated video.

But you wouldn't know about any of that from the two presidential candidates, including the Democrat who says she supports a woman's right to choose.

Last night, Trump admitted that he would nominate Supreme Court justices who would, without doubt, overturn legal abortion. By comparison, Clinton seemed, well, actually human. But as a result, the limitations of her defense of the right to legal abortion, now and in the past, were overshadowed.

Clinton helped perfect the modern-day Democratic strategy of searching for "common ground" with conservatives on the issue of abortion--an issue on which any sincere defender of women's rights shouldn't find common anything with the right. She helped coin the slogan of "safe, legal and rare" as the goal of pro-choice Democrats.

The "common ground" arguments haven't saved reproductive rights--instead, they've given up ideological ground to the right and made the pro-choice side weaker.

If you want to know how important reproductive rights are to Hillary Clinton, look at her vice presidential choice Tim Kaine. In 2005, he ran for Virginia governor promising to lower the number of abortions in the state by promoting abstinence-only education. The state's chapter of NARAL withheld their endorsement because he "embraces many of the restrictions on a woman's right to choose."

But of course, nothing is getting in the way of the mainstream women's organizations backing the Clinton-Kaine ticket to the hilt this year. They don't care if reproductive rights are part of the debate. But a lot of women out there do--and many of them are fed up with the way the Democrats take them for granted at election time, and don't lift a finger to stem the attacks when they come.

Remember the $15 Minimum Wage and All That Socialist Stuff?

It's almost obliterated from our memory, thanks to the monstrosity that is Donald Trump, but during the Democratic primaries, Hillary Clinton had to talk about some of the issues that supporters of the Democratic Party care about

The socialist message of the Bernie Sanders campaign put these questions in the spotlight and forced the most corporate of Democrats to address them--and also answer for her own terrible record on a number of things that didn't come up at the debate. For a time, the brewing anger at corporate greed and the corrupt political status quo--given expression in grassroots movements like the Fight for 15 and Black Lives Matter--found a voice in the political mainstream.

With a few weeks to go before the election, that seems like a long time ago.

Part of the reason is Hillary Clinton, but another part is Bernie Sanders. He's stopped his sharp criticisms of Clinton and tells his supporters that now is the time to stop Trump, not make demands on Clinton. In the debate, when Trump repeated one of his routine sound bites about Sanders saying Clinton had "bad judgment," Clinton smiled smugly and pointed out that Sanders was campaigning and urging a vote for her.

There were many issues that Clinton had to address this year only because people mobilized to make sure they couldn't be ignored--like anti-racist activists who made sure she was reminded of her support for Bill Clinton's crime bills, or Palestinian rights supporters who confronted her support for Israeli apartheid.

Those issues were invisible at the October 19 debate, but so were many others that people care about. They don't come up within the narrow confines of mainstream politics in the U.S.--where the politics of fear of what's worse forces voters to settle for what's hopefully less bad.

The two-party duopoly is organized to squash political debate and dissent outside the mainstream--which is why it's up to us to raise both, before the election between Clinton and Trump is decided, and especially after.