Teachers and the testing mania

Paul D’Amato explains how the use of standardized tests to root out "bad teachers" has deflected attention from the main determinants of educational achievement.

IN THE introduction to her 2010 book, The Death and Life of the Great American School System, former Assistant Secretary of Education Diane Ravitch explains how, for many years, she "had jumped aboard a bandwagon, one festooned with banners celebrating the power of accountability, incentives, and markets."

As a charter member of school reform "based on principles drawn from the corporate sector," Ravitch believed that "testing would shine a spotlight on low-performing schools, and choice would create opportunities for poor kids to leave for better schools."

The corporate model uses market terminology to describe educational improvements. Students, in this model, are like commodities, and the teachers like workers who mold the raw material--students--into a new product. A teacher whose students' test scores improve are said to have "added value" to the students.

According to Ravitch, it has become "received wisdom among liberal elites" that public schools are failing because of unions protecting "bad" teachers, and that the only solution is holding teachers accountable (through constant testing) and setting up privately managed schools with public money--once an argument pushed only by the right. This "wisdom" is backed by both mainstream political parties and has the support of the wealthiest foundations, run by billionaire "reformers," hedge-fund executives and corporate-media tycoons. 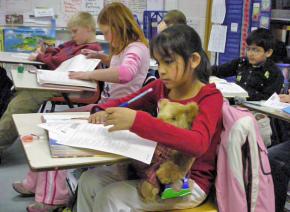 But experience and reflection convinced Ravitch that trying to run schools like businesses doesn't work. She now deplores George W. Bush's No Child Left Behind and Barack Obama's Race to the Top as a "numbers racket."

A GROWING mountain of evidence supports her conclusions. In particular, the use of standardized tests in reading and math to measure student performance, and the punishment and rewarding of teachers based on student performance on these tests, do not have the impact claimed by their supporters.

There are a number of reasons why this is so. For one thing, test results vary considerably from year to year, so that teachers ranked high for effectiveness (because their kids scored well on tests) in one year find that, for a variety of factors beyond their control, their students perform worse the following year.

One study, for example, conducted across five large urban school districts found that fewer than a third of teachers ranked in the top 20 percent of effectiveness in one year were in that rank the following year--and a third of that group found themselves in the bottom 40 percent.

If the test determines whether or not you are a good or bad teacher, then many teachers are "good" teachers one year and "bad" teachers the next.

Some factors that teachers can't control, but that strongly impact student performance results, include the small sample of students the teacher works with (exacerbated in poor districts by high classroom turnover); changes in the personal and socioeconomic status of the students; lack of a clear relationship between the test material and the curriculum; and tests that are not geared to the class and cultural experiences of the students.

Naturally, schools that have more tutors, classroom aides, counselors, nurses and clean and air-conditioned facilities, with plenty of up-to-date teaching materials and technologies, small class sizes, and better-paid and more experienced teachers are going to do better than poor schools where these things are lacking.

Students from more affluent backgrounds, who have educated parents, households with plenty of educational stimuli, and whose social environment endows them with a sense of entitlement, will enter these well-endowed schools with an enormous edge. Meanwhile, more economically disadvantaged students come from more challenging home environments and end up in resource-deprived schools.

As a 2010 Economic Policy Institute (EPI) report notes, "Teachers working in affluent suburban districts would almost always look more effective than teachers in urban districts if the achievement scores of their students were interpreted directly as a measure of effectiveness."

There are a number of other reasons why it's problematic to rely on standardized tests to measure teacher and student performance.

For one thing, it isn't at all clear that standardized tests measure student achievement or educational abilities very well. As the EPI report argues, "[T]hey are narrow measures of what students know and can do, relying largely on multiple-choice items that do not evaluate students' communication skills, depth of knowledge and understanding, or critical thinking and performance abilities."

The testing regimen forces on teachers an obsessive focus on reading and math, to the detriment of a more well-rounded education that includes science, history, the arts, civics and foreign language. A survey in 2006 by the Center on Education Policy found since the 2002 passage of Bush's No Child Left Behind law, 71 percent of the nation's 15,000 school districts had reduced the hours of instructional time spent on history, music and other subjects.

According to a report in the Huffington Post, over the decade ending in 2010, "The percentage of elementary schools with a visual arts class declined from 87 to 83 percent. In drama, the drop was larger: From 20 percent to 4 percent in the 2009-10 school year." In music, the stats were also startling: "While 100 percent of high schools where 76 percent or more students qualify for free or reduced lunch--a key indicator of poverty--had a music class in the 1999-2000 school year, only 81 percent did a decade later."

THE STATED intention of Bush's No Child Left Behind legislation--to give kids more time to focus on math and reading--just happened to dovetail nicely with efforts to cut education spending. So while affluent schools like Whitney Young Magnet High School in Chicago have thriving theater, art and music departments, poor schools are increasingly depriving poor kids of color "for their own good."

In Chicago, according to Nation journalist Liza Featherstone, "only a fourth of the city's neighborhood schools had a full-time art teacher and a full-time music teacher, and 42 percent of them had neither" in 2011. "Mayor Emanuel obviously knows that such a state of affairs is intolerable for children," Featherstone reports, "as he sends his own to a progressive school [the private University of Chicago Laboratory School] whose director staunchly opposes standardized testing."

"Teaching to the test," that is, forcing teachers to direct all of their students' efforts toward taking a series of standardized tests, may teach some students how to be good test-takers, but it doesn't necessarily teach them anything else of value. As Ravitch writes:

School districts have invested hundreds of millions of dollars in programs and training materials that teach students the specific types of questions that will appear on the state tests...For weeks, children are drilled daily in test-taking skills and on questions mirroring those that are likely to appear on the state test...[Students] master test-taking methods, but not the subject itself.

This creates an illusion of progress, toward which everyone at the school is compelled to direct every last effort. Under the testing system, administrators feel enormous pressure to inflate test scores by either changing the test or the testing procedures. Major school districts, including New York City and Chicago, have been exposed for engaging in such practices.

This environment is demoralizing for teachers--especially in schools serving low-income neighborhoods. Many educators become disillusioned and burned out by the constant pressure to prepare their students for testing and the constriction of what they can teach and how they can teach it. What's more, the district's apportioning of rewards to individual teachers forces teachers to compete with each other rather than collaborate. Under these conditions, it's not difficult to figure out why so many teachers decide not to stick around. In Chicago, the average teaching "lifespan" of a teacher is five years.

This model also discourages teachers from seeking employment in schools that serve more mobile, low-income and needier students--for fear that they will be disciplined or fired for failing to raise their students' test scores.

Both public and charter schools that are not required to take in all students use various means to restrict admission of low-performing students in order to boost test scores--requiring interviews, admission essays or letters of recommendation from previous teachers, for example, or excluding English-language learners, student with special education needs, or students with poor attendance records.

Flunking failing students and expelling "troubled" students is another means. This is a very effective way to boost scores without doing anything to enhance the educational quality of the school. The "undesirable" students are then dumped into traditional public schools, which becomes yet another reason to bemoan how bad they are.

The result is not only that standardized tests fail to accurately measure educational achievement, but also that the testing regimen impoverishes the learning environment. Even if students learn how to take the tests better, it is still not an accurate measure of their reasoning skills or level of knowledge.

The irony of this model is that it is not actually the model used to evaluate managers in private corporations. They do not take standardized tests to determine demotion, promotion or firing. Indeed, if the Great Recession has taught us anything, it is that corporate executives and managers can make millions of dollars in compensation even when they run their own companies into the ground.

THE PERFORMANCE-based model becomes the most disastrous when it is used to declare an entire school "nonperforming" and to shut it down. The closings happen overwhelmingly in schools serving low-income Black and Latino students. The result is that students are forced to adjust suddenly to new teachers, a new school and a new neighborhood.

Moreover, according to the results examined in the EPI report, the experience of Bush's test-driven No Child Left Behind program indicates that rewarding and punishing teachers based on standardized test results has done nothing to change the educational achievement gaps for minority students in reading and math.

So, if the corporate model of school reform doesn't actually work, why is it being pushed? Are its promoters just stupid?

The truth is that corporate-driven education reform is not intended to provide improved education for all; rather, it is about setting up public schools to fail--by deliberately starving them of funds and then blaming teachers for their sorry state. This gives city officials the leverage they need to weaken, if not eliminate, teachers' unions and expand non-union charter schools that can hire new, inexperienced teachers at lower pay. The Illinois Interactive Report Card notes that the average salary of CTU members is $71,000, while the average teacher salary at a Chicago charter is about $45,000.

It's about creating a two-tiered system in which better-endowed magnet and charter schools target and attract the best students, while the "non-performing," poor and needier school population is dumped into a decaying and declining public school system. And finally, it's about greedy investors using public money--our tax dollars--to line their pockets by making profits on the new frontier of charter schools.

That's precisely why the Chicago teachers' strike is so important. It could be the beginning of a struggle to turn the tide against the disaster of corporate-driven school reform nationally.