Taking hope and laughing, too

Sherry Wolf reviews the searing and funny indictment of the world's most powerful nation, America's Got Democracy! written by SW contributor Danny Katch.

THE NEAR-silent absorption of 40 or so patrons at a Times Square bar during the second presidential debate was striking. It was a multiracial crowd, many of them workers just off their shift from the nearby Port Authority, most clearly affected by the tumultuous economy and desperate to hear something of substance that could positively affect their lives.

Cheers in response to Obama's final dig at Romney's contemptuous comments about 47 percent of Americans gave way to bar chatter afterward. Most of these working people are disgusted with the inanities of the election season and the tepid political stance of the president--for whom everyone there had apparently voted.

And they were resigned to vote for him again, despite all of Obama's shortcomings. A version of this scene was no doubt repeated in bars and living rooms across the country.

Acquiescence to the hollowness of U.S. elections and the corporate hucksterism that pervades every campaign season are among the many aspects of American democracy spoofed and dissected in Danny Katch's searingly witty new eBook America's Got Democracy! The Making of the World's Longest-Running Reality Show. 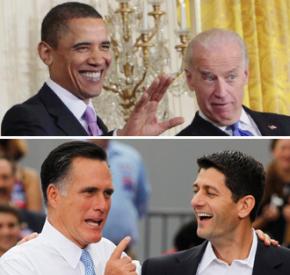 From Cocoa Puffs to melting ice caps, America's Got Democracy! gets to the heart of how and why our political establishment creates economic, social and environmental crapification--and Katch does it with a flair that even the most disaffected café barista with a PhD will love.

Katch's plainspoken analysis of the two-party system wrapped in humorous anecdotes and metaphors avoids any whiff of a screed against those who might question or disagree with his socialist viewpoint. His political patience with progressives who see no other option than the two-party system, at least for now, is marked by a self-effacing humility that seems to be an effective tool at reaching the unconvinced.

At his New York City eBook launch on October 21, Katch's hilarious stand-up routine won the admiration of even Obama button-wearing liberals. This is a crucial aspect of his writing that many on the left can learn from. Frustration with others who "don't get it" can often lead to impatient verbal attacks on the majority of left-leaning liberals and radicals who don't have hope that an alternative to the Democrats is on offer.

Katch grasps that attacking leftists who vote for the Democrats is a dead end. Instead, he respects his audience of radicals and liberals alike, and identifies with people's horror at the right wing and confusion with the unraveling state of the nation. Katch writes:

Instead, by the fall of 2011, America appeared to the world like a mad king, less the inbred kind than a figure from the end of a Shakespearean tragedy: arrogant yet bewildered at what has gone wrong, still covered in the blood of Falluja and Kandahar, instinctively firing off drones to new lands, even as the economic realm lay in ruins...

Shakespeare might have attributed these disasters to divine retribution. Michele Bachmann said the same thing, which proves that the difference between a genius and an idiot is about four hundred years.

KATCH'S CASUAL approach shouldn't be dismissed as politically lightweight. His point is to engage readers in an understanding of not just this election cycle, but the guts of the system--how it functions, what its inner contradictions are, and how imbeciles and titans have come to dominate our world.

America's Got Democracy! pulls in readers with political explanations tied to real-world experiences, especially those of adults who are, like Katch, parents of young children:

The state and business complement each other because they are different. Marx and Engels wrote in the Communist Manifesto: "The executive of the modern state is but a committee for managing the common affairs of the whole bourgeoisie." In other words, the state is the grown-up to the corporation's child. The state pushes the shopping cart while the corporation sits in the front, grabbing whatever it wants, leaving it up to the state to clean up its spills and occasionally put a tasty but unhealthy item back on the shelf.

As any exposé about how U.S. democracy actually functions must, America's Got Democracy! takes apart institutionalized racism. It counterposes structural discrimination to the common-sense notion that racism results from "some dumb yokels who learned it from dumb yokel parents."

Instead, Katch argues, "From the moment the Declaration of Independence declared all men to be equal, racism has been the fingers crossed behind the national back. (Obviously, sexism didn't even need to be hidden.)"

From there, he goes on to unveil the way exalted institutions like the Supreme Court and Congress have collaborated with big business to build racial discrimination into the fabric of U.S. society. And the book is chock-full of anecdotes and analyses of the limitations of radical protest movements that remain tethered to the Democratic Party.

Thankfully, this eBook wasn't written in a vacuum, but reflects the hopes and vacillations of upheavals from Egypt to Occupy Wall Street. As an active participant in the Occupy movement, Katch is well-placed to surmise that "[m]ost of us grew up with the assumption that capitalism and democracy are partners, but now we're finding that they're rivals."

The momentous social and economic convulsions of our era stand in stark contrast to the Lilliputian sights of the political class. At times, it is enough to make a radical weep and fall into despair.

Thanks to Katch, we can take hope and get some laughs from a slim volume that sweeps aside the electoral madness and invites us to remember that democracy isn't something that can happen without our participation.