Punished beyond the penalty

Police torture victim and activist Mark Clements, who spent nearly three decades in prison for a crime he didn't commit, looks at the injustices of "Andrea's Law" in Illinois.

A NEW Illinois law took effect in January 2012 that required all people convicted of murder or of general violent crimes against youth to register with local police departments after they are released the Illinois Department of Corrections (IDOC).

Men and women who have been released any time after 2002 must register, or they could be charged with a class three felony and sent back to prison. This new law was created and retroactively applied in the wake of a 1998 murder of an Eastern Illinois University student, who was killed by her ex-boyfriend. According to the Huffington Post, there was significant public outcry last winter when Boulay was freed after serving a sentence of only 12 years.

Under the provisions House Bill 263, better known as "Andrea's Law," anyone found guilty of murder or other qualifying crimes would be in the registry--which is accessible to the public via a website database--for 10 years following their release from prison.

Many ex-offenders who were convicted of murder and who have served their sentences describe this new law as redundant and a way for law enforcement and prosecutors to keep the handcuffs on them even after they have completed their sentences. Ex-offenders have two weeks after their to contact the Illinois State Police Department and to set up appointments to register with local law enforcement. 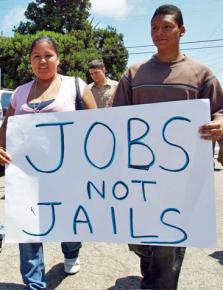 They are required to pay $100 to register--and if they do not have it, they are faced with possible incarceration.

Illinois State Rep. Monique Davis of Chicago, the only lawmaker to vote against the bill when it first passed the state House, told the Chicago Tribune that law enforcement already had difficulties keeping a sex offender registry current and said another registry wouldn't address public concern about ex-offenders. Instead, she said Illinois should invest "more resources in transition programs for released prisoners and safety education programs for the general public," the Chicago Tribune reported.

Brian Nelson, who pled guilty to first-degree murder in 1983, was released from prison a year ago and has lived with his mother since then. He told the Tribune that he worries about how his mother's life would be affected if people who live near her discover through an online registry that he is a neighbor.

"A lot of people, when they get out of prison, have no one to live with but their parents or family," Nelson told the Tribune. "I served 28 years and did my time. Where do you draw the line?"

As the Tribune reported:

Nelson also questioned how the registry would really prevent people from reoffending, noting that it does not go as far as other law enforcement tracking measures like electronic monitoring. "I won't hurt nobody again," Nelson said. "But how is this going to stop somebody?"

As someone who was falsely convicted of murder after being tortured by Chicago police and spent 28 years in prison despite committing no crime, I am considered an ex-offender and subject to this law. Illinois legislators have created a law that amounts to nothing more then a way for the state to profit from poor people who have already been punished, since they served years, if not decades, behind prison walls.

Murders committed by those released from prison are a terrible tragedy, but they will not be prevented by a law like this. Sadly, they are going to happen in a society that promotes incarceration over social programs. Chicago saw a increase in murders in 2012, and this year, the high pace seems to have continued, proving the need for programs which youth can take part in that can deal with the underlying causes.

Instead, this new registry law imposes a greater hardship on people who have already completed their sentences and who are attempting to move forward with their lives.