A Whole Foods worker describes the low wages, lack of benefits and poor working conditions that employees endure--and argues that the answer is unionization.

WHOLE FOODS CEO John Mackey sparked outrage recently when he said in an interview with National Public Radio that the Obama administration's health care law was "like fascism."

Although it caused a stir in the media, such comments are nothing new from the multimillionaire libertarian--a man who once compared having a union to having herpes ("It doesn't kill you, but it's unpleasant and inconvenient").

Mackey has since said he thought using the word "fascism" was a "bad choice" on his part. But he was more than happy to defend his reasoning.

In a reply--apology is too strong a word--to the public outrage, a self-satisfied Mackey wrote in a January 17 article for the Huffington Post, "I'm speaking as someone who works hard to offer health care benefits to more than 73,000 team members, who actually vote on their overall benefits packages."

For those of us who work for Whole Foods, Mackey's comments were not particularly surprising, but they may provide one avenue for us to win public support for improved conditions in our workplace. 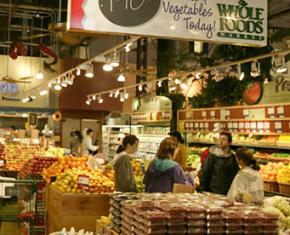 It's true: Whole Foods employees "voted" on our benefits package this year. What Mackey doesn't tell you is this: On the health care portion of our benefits vote, we were presented with three choices that we had no voice in drafting, and all of them resulted in significant cuts in benefits and increases in out-of-pocket employee costs. This not only has implications for the overall health of employees, but also resulted in, essentially, a pay cut.

Employees had no avenue to negotiate over whether these options were fair. We had no opportunity to discuss them with our co-workers. Instead, we were pulled in small groups to a conference room filled with computers where we listened to corporate "benefits specialists" explain each of the options, ask for clarifying questions, and then give us a few minutes to make our choice.

In my voting session, the benefits specialist glossed over the ways in which two packages threw workers with families under the bus in order to lessen cuts to the benefit packages of single workers who have no dependents.

Then, on the way out, they handed us "I voted!" stickers and thanked us for participating in "workplace democracy."

Of course, it wasn't workplace democracy in that conference room--it was management forcing us to accept a benefits cut in order to increase the already massive profits that we create for the company. This mask of democracy is central to the way Whole Foods does business, but it's a mask that workers can increasingly see through.

And that's why, in ever-increasing numbers, we want a union.

THE SHAM benefits vote was not exceptional, but rather fit with the pattern of experience for Whole Foods workers. Although it markets itself as a caring health foods store, Whole Foods doesn't care about the welfare of its own employees.

In the last year, the company has instituted speedups through different policies store to store. In one store, all full-time non-managerial employees had their hours reduced to 30 hours per week. Management cited a decrease in sales numbers, but when sales picked back up, they continued to operate with the reduced hours schedule, resulting in a 25 percent pay cut for full-time employees.

In other stores, management has begun an "incentive" program for cashiers, rewarding increases in items rung up per minute (IPM) and stressing that all cashiers should be increasing their IPM to 30. The average IPM for most cashiers, when ringing at a comfortable and sustainable pace, is 14 to 20 IPM.

Management is not interested in us honing our ringing skills because it would increase personal job satisfaction, but rather because it would reduce the number of cashiers needed to run the floor, leading to cuts in hours and layoffs. Those who keep their jobs will be forced to operate at breakneck pace, where mistakes are more likely, or they will face lines of angry customers.

The company has also forced employees to replace our own safety equipment in the last year. All employees are required to use certain safety equipment at work, including non-slip shoes and, for those working with knives, cut-resistant gloves. Whole Foods budgets a small amount for shoes, but the amount often does not cover the whole cost of a pair of shoes, especially for workers who need comfortable and supportive footwear. We stand on our feet all day--often without the ability to move around freely.

One cut-resistant glove is provided, once, by the company, but gloves wear out quickly due to constant use and frequent washing. Workers must pay to replace them. This encourages people to avoid the use of safety equipment, which can lead to accidents or to disciplinary action. The company should provide all safety equipment free of charge to employees.

In addition, sexual harassment has been allowed to go unchecked. It's 2013, and long past the time when service and retail workers should be forced to hold their tongue as customers objectify, patronize and degrade. Women workers should not have to tolerate creepy male customers or their comments, nor should it be acceptable for any worker to feel threatened or unsafe in the workplace.

Whole Foods management, however, allows both to happen. This is not the result of a few bad (though presumably organic) apples, but because the company sells its customer service as a justification for its outrageously high prices. Although most Whole Foods employees deal with some kind of sexual harassment--mostly from customers, but also sometimes from management--women bear this load disproportionately.

The company--whatever its handbook may say, and despite some lower-level supervisors who defend employee rights--does not take sexual harassment seriously.

Those are perhaps the three biggest complaints that form the tip of a much larger iceberg of discontent among Whole Foods workers. But others include an overly harsh attendance system, no designated sick days, promotion of overtly sexist management, racist rules designed to target Spanish-speaking workers, mandatory holiday hours in a non-essential industry, and erratic scheduling that interferes with our ability to have full and meaningful lives outside of work.

If John Mackey is trying to prevent unionization by "doing right" by his workers, he's doing a good job of hiding it from us. Is it really so surprising that so many of us favor unionization?

YET I find myself constantly amazed at how many customers think we are treated really well by the corporation. "You must love working here," they say, probably not realizing that I and many of my co-workers--including some in full-time supervisory positions--are forced to rely on food stamps and struggle to make ends meet.

It's true: the working conditions at Whole Foods are better than they are at many other nonunion grocery stores, or at many big box retailers Wal-Mart. But being grateful that we aren't desperately scraping by on $8.25 or less an hour is a recipe for disaster that will only lead to a decline in wages, benefits and working conditions. Instead, we should be comparing what we have to what we deserve.

We deserve a living wage with full-time employment, full health care benefits (including vision and dental), regular scheduling, protection from harassment, a comfortable pace of work, paid sick leave and rotating holiday hours. Instead of stretching out our shifts beyond eight hours, more workers should be hired. As retail service workers, we deserve to be treated with the same dignity and respect that we give to our customers.

How can we accomplish that? The answer is clear: we need a union.

Mackey's comments come at the same time as an employers' offensive has driven union membership to new lows. Just 11.3 percent of workers in the U.S. are now in a union. Last year, unionization in the public sector fell 1 percent to 35.9 percent. In the private sector, union membership declined by 0.5 percent to just 6.6 percent.

The job of organizing Whole Foods is not an easy one, but it is absolutely necessary. Alone, we face retaliation and intimidation. Even united, the fight will be hard.

Whole Foods has crushed every unionization effort in the company so far, while Mackey and others remain careful to tell the press that workers have the right to unionize if they so wish. Behind the scenes, however, Mackey and Whole Foods were one of the driving forces in Corporate America to derail the Employee Free Choice Act, which would have made it easier for U.S. workers to join unions.

According to a 2009 article by Mother Jones, an internal Whole Foods document listing "six strategic goals for Whole Foods Market to achieve by 2013" included a goal to remain "100 percent union-free." The same article documented a Bay Area Whole Foods manager gathering employees for a meeting in which they were threatened, "[O]nce you become represented by the union, basically...every benefit you have is kind of thrown out the window, and you renegotiate a contract."

Such intimidation doesn't mean we can't win. The central task is to organize our co-workers, but we also need to tear apart the mask that John Mackey likes to place over the dirty machinery of his corporation.

People were rightly outraged when Mackey referred to Obama's health care law as "fascist." They should be equally outraged that full-time Whole Foods employees can't break out of poverty. They should be infuriated that a single mom can be fired without appeal because the schedule manager continually schedules her for a time when she has told him she has no child care. And they should up in arms over the fact that as the company makes massive profits and opens more stores than ever, it cuts the wages and benefits of its employees.

Those outraged by John Mackey's comments should actively support Whole Foods workers, whenever and wherever we fight.