Setback for living-wage measure in Sea-Tac

Steve Leigh reports on a court ruling that blunts a victory for low-wage organizing.

IN A late Christmas present to corporations that didn't need it, King County Judge Andrea Darvas ruled at the end of December that a ballot measure mandating a $15-an-hour minimum wage in a town just south of Seattle won't apply to most of its low-wage employers: businesses at the Sea-Tac International Airport.

Voters in the town of Sea-Tac passed the referendum for a living wage last November by a very close margin. The measure only won by 77 votes--though the "yes" vote would certainly have been bigger if the town's non-citizen workers could vote.

Unions, including the Service Employees International Union and the Teamsters, and community groups, including Working Washington and Puget Sound Sage, were instrumental in this victory. They engaged in an extended campaign--involving churches, neighborhood groups and others, with volunteers going door to door--to win the measure.

Meanwhile, employers, including major national and international corporations, pulled out all the stops to defeat this initiative. They claimed the referendum would be a job killer--that poor multibillion-dollar corporations would have to lay off workers if forced to pay the princely sum of $15 per hour. Businesses also objected to other important provisions of the measure requiring paid sick leave and a cost-of-living adjustment for the minimum wage. 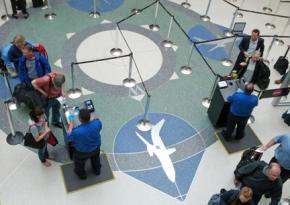 After the bosses lost at the ballot box, they took their fight to the courts.

In her decision announced December 27, Judge Darvas declared that cities "may not exercise any jurisdiction or control over Sea-Tac airport operations"--since the airport is owned by the Port of Seattle, which joined employers in filing the lawsuit.

As a result of the ruling, of the 6,300 low-wage workers in Sea-Tac, only 1,600 of them--mostly at airport hotels--will be covered by the ordinance.

Proponents of the initiative said they would appeal. "National corporations are making huge profits at Sea-Tac when thousands of people work hard every day can't support their families, said Sergio Salinas, president of SEIU Local 6. Salinas said the issue now is "whether the airport is a legal island."

THE RULING, if it stands, represents a real blow to the thousands of workers directly affected--and the thousands more in the area who will see their wages held down as a result.

The referendum campaign was itself an outgrowth of a long struggle against the large airlines and other businesses that serve the airport.

The need to organize airport workers arose a decade ago when airlines--especially Alaska Airlines, the largest carrier at Sea-Tac--subcontracted much of the airport work to low-wage employers. Drastic cuts in wages and benefits were the result. Working conditions deteriorated in general. As one airport worker put it, "We don't have vacation. We don't have family leave. We don't have medical. They don't respect us."

Workers at the subcontracted businesses at the airport never caught up with the wage rates they were paid before the shift in employers began more than 10 years ago.

Labor organizing at Sea-Tac led to a series of marches and rallies, including at Alaska Airlines stockholder meetings, with the goal of unionizing workers at the airport and raising wages and conditions.

Recently, organizers added the strategy of seeking a minimum-wage referendum at the ballot box. The success of the measure, despite the all-out opposition of the business elite, shows the growing momentum of the "Fight for 15" movement, one of the most encouraging developments for working class struggle in 2013.

Now, the court decision raises a lot of questions about the political and economic system: Why is democracy so limited that the voters of a city can't control the largest employer in town? Why did the Port of Seattle join in with the corporations against the minimum wage increase? Why didn't it simply mandate the new minimum wage for all contractors? Indeed, why does a public entity like the port have to pushed by voters into a living wage?

Other questions arise from the election itself: Why should the large number of non-citizen residents of Sea-Tac be excluded from votes with a real impact on their working lives? Doesn't real democracy mean that all residents should get to vote on questions that affect them? Why should corporations be able to use the profits they make from exploiting workers to try to buy elections and stop measures designed to benefits those same workers?

And of course: Can we ever expect justice from the U.S. court system?

Regardless of the outcome of the appeal, the struggle for low-wage workers at the airport and in surrounding areas will continue. Anyone who cares about justice must side with these workers as they try to improve their intolerable conditions.

Washington state has the highest minimum wage in the U.S. ($9.32 an hour as of January 1, 2014), but this is not enough to guarantee a decent life, even for an individual, much less for someone trying to support a family. Even working full time--which is far from the norm for low-wage workers--minimum wage employees in Washington state will gross around $1,600 a month before taxes. It's hard to find a decent one-bedroom apartment for less than $1,000 a month in the Seattle area.

The referendum campaign gave a real boost and visibility to low-wage organizing in and around Sea-Tac, while workers have the ability to exercise the power they have on the job with workplace organizing. We need to support the struggle to unionize all workers in Sea-Tac and win a living wage.