The mayor of hypocrisy

Rahm Emanuel is exacerbating the crisis in communities that he has pledged to protect, explain Carlos Enriquez and brian bean.

YET ANOTHER murder gripped the attention of Chicago on March 11 when 6-month-old Jonylah Watkins was shot and killed as her father changed her diaper in a minivan in the South Side neighborhood of Woodlawn. Already this year, more than 60 people have been murdered in Chicago, but the killing of such a young child tends to burn a little hotter in our collective memory.

A day later, the words of Chicago Mayor Rahm Emanuel added to the sting. "Everybody has a role to play to make sure every child is in a safe city, in a safe neighborhood, in a safe community, on a safe street," he said. "I will not rest until every child grows up in that environment."

But the problem isn't what Rahm hasn't done. It's what he has done--to ruin the lives of working people and the poor in Chicago.

Since he took office, Emanuel has gone on a virtual rampage--cutting social services, getting rid of good-paying jobs in the city, and handing out massive giveaways to the rich and corporations.

When Emanuel's budget was passed in late 2012, it contained $67 million in cuts to services and city jobs. That's certainly contributed to the continuing unemployment, immiseration and despair at the root of violence in the city. This included closing half of the city's mental health clinics. Not surprisingly, the vast majority of these closings occurred on the city's predominantly African American South Side and in other communities mainly made up of Black and Brown people. 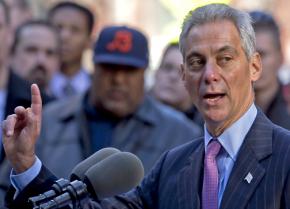 In Woodlawn, there were protests and occupations last spring to save the clinics, but in the end, Emanuel pushed through his dictates over and against the outcry from the communities he now claims to fervently advocate for. It was less than a mile from one of these closed clinics that Jonylah was killed--an intersection of the geographies of austerity and violence that is all too common in this city.

It's not just that Rahm Emanuel is a bad guy--which he is--but that he represents a Democratic Party machine and its agenda of privatizing, diminishing or closing every social service available to working people.

The city of Chicago has served as the testing ground for this kind of austerity--like the current plan to close more than 100 public schools. A majority of those potential closings are on the city's South and West Sides--nine out of every 10 children affected by the list of 129 possible schools to be closed are Black.

Never mind the disruption and destruction of communities as schools close and teachers are fired. There's a larger purpose--funneling more tax money paid by ordinary Chicagoans onto the balance sheets of multimillion-dollar charter school operators.

While Rahm's millionaire friends get rich off of youth, the youth don't fare so well. After the closures that the mayor insists are coming, many students will have to cross gang lines and make their way into unfamiliar neighborhoods to attend schools now further destabilized by this influx of new students. More violence will result from this policy.

Even the commission that Emanuel himself appointed to explore the closures stated in its report that school closures have "not in the past led to greater educational opportunities for children"--a damning indictment that the neoliberal policy of school "deform" has nothing to do with improving schools, but only improving the profits of corporations.

But Rahm and his family can rest easy. His own children receive a private education at the pricy University of Chicago Lab School, even as his policy of educational apartheid ravages the South and West Sides.

GIVEN THAT he has done so much to exacerbate the city's problems, Emanuel's assertion that "everyone has a role to play" is especially insulting.

His choice of words is standard fare in the mantra of "personal responsibility," attempting to lay blame for violence on the people affected by the conditions he helped create. He articulated this again during a recent panel discussion in Florida, declaring that the real problem with education is not underfunded schools, but "bad parents."

The Chicago Sun-Times got in on the scapegoating act when the paper's editors proclaimed that they were "unmoved by the pain" suffered by Jonylah's father, doubting his ability to parent because of his criminal record. The editorial went on to suggest that one solution to Chicago's violence would be to take children away from their parents if they are "gang-bangers"--though it never paused to define this term, nor to ask why gang violence might plague public schoolchildren, but not children who attend the Lab School.

The editorial also calls on Chicago officials to look to Los Angeles, "where since 2004 specially trained social workers actually accompany police officers on raids. While the helicopters swirl above a home and the police conduct searches, the social workers look after the children."

So that's where we should direct the city's shrinking funds! Deploy social workers to swoop in and pluck children from the scene as their parents are arrested and incarcerated. But until then, continue the merciless assault on the city's social services, keep pushing down wages of city workers, and keep handing out tax breaks to corporations--as if there's no relationship between poverty, crime and violence.

Equating a criminal record with an inability to parent is also plainly racist. The gross disparity in policing, arrests and sentencing in communities of color--and the corruption of police who patrol there--is now a well-established fact. In some neighborhoods of Chicago, as many as 70 percent of Black males have criminal records.

Apparently not content to stop there, there are now calls from Emanuel's administration to implement the kind of notorious "stop-and-frisk" policy recently found unconstitutional in New York City.

But in a city where police are legendary for extracting false confessions from young Black men, as well as for covering up their own abuses, giving police more reasons to stop Black and Brown people is the problem, not the solution.

This policy could only be effective if Rahm Emanuel's plan for keeping Chicago's Black and Latino youth safe from gun violence in the streets is by locking them up behind bars.