Rachel Cohen looks at who's to blame in the latest assault on reproductive rights.

THE ANTI-choice right wing is gaining momentum in its war on women's reproductive rights. In one state after another, legislators are passing laws that could render abortion completely inaccessible. Their increasingly brazen measures could overturn abortion rights in fact, if not according to the letter of the law.

In the latest assault, Indiana Gov. Mike Pence is expected to sign into law a bill that requires surgery standards for facilities that prescribe abortion-inducing medications, even if the clinic does not perform surgical abortions. The standards include larger hallways and doorways, and a surgery recovery room.

These restrictions serve no apparent medical purpose--nor do they make any logical sense. Abortion-inducing medications must be taken in two separate rounds, at least 24 hours apart. Are patients meant to sit in a recovery room for days on end? And does the bill's sponsor, state Rep. Sharon Negele, have an explanation for why women who receive a prescription will need to exit the building through an extra-large doorway? 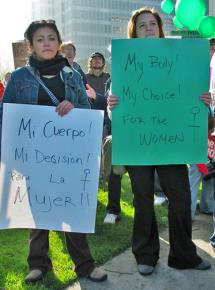 The real purpose of the law has nothing to do with logic. It is meant to place another onerous burden on abortion providers, particularly those providing a method which many women frequently choose, because they prefer staying in their home while the drugs take effect over a procedure in a medical facility.

The legislation only applies to one facility in Indiana. But similar laws to impose new facility requirements on abortion clinics are under consideration in Virginia, Alabama, Mississippi, Michigan and Pennsylvania--and the impact in these states would hit many more clinics. Pro-choice advocates say the Virginia legislation could close down all 20 facilities in the state that provide first-trimester abortions.

The broader impact of such laws would be to drive women to seek abortion-inducing medications without the help of a doctor. While medication abortions are not dangerous to women who have been checked by a doctor, complications could arise for women unaware they have an ectopic pregnancy. Plus, women using medication without consulting a doctor would have to depend on over-the-counter pain relievers during what can be a very painful procedure--and would not be encouraged to visit a doctor for a follow-up exam.

Most worryingly, a woman in Indiana seeking a medication abortion without a prescription could be targeted under the state's draconian "feticide" law--which criminalizes women accused of harming their fetuses.

While medically administered abortions are exempt from the statutes, these so-called "feticide" laws have already been used to target women in heartbreaking ways. For instance, the state is threatening Bei Bei Shuai with up to 45 years in prison on charges of murder after her failed suicide attempt resulted in her going into labor--and her newborn infant, Angel, was unable to survive.

Shameless anti-choice lawmakers claim these measures are about protecting women's health. But they are obviously intended to harass clinics--and even force them to close if they can't afford expensive renovations.

Meanwhile, the anti-choice agenda is on display most dramatically in Mississippi, where the state's only remaining abortion clinic faces closure if it can't secure admitting privileges at local hospitals. Medical experts have said that such admitting privileges are completely unnecessary. Yet even as the Mississippi clinic challenges this requirement in court, Alabama is preparing to pass a new law with the exact same stipulation.

STATE LEGISLATORS in Alabama and Mississippi are attempting to sneak a practical ban on abortion through the widening back door. But in other states, politicians are trying a more explicit approach.

The Supreme Court's Roe v. Wade decision explicitly protects abortions taking place before a fetus becomes "viable," meaning being able to survive outside the womb. Viability occurs at 24 to 28 weeks into a pregnancy. Yet a succession of states have devised dubious rationales to establish earlier cut-off points, after which abortions are banned.

In March, Arkansas banned abortions after 12 weeks of pregnancy. At the time it was passed, the legislation set the earliest ban of any state in the country.

Like so many of the hundreds of restrictions imposed over the last two years on women's access to reproductive health care, the 12-week ban will only harm the most vulnerable people.

Around 88 percent of abortions are obtained in the first 12 weeks of pregnancy--most women who seek later abortions have either encountered a medical complication; are young and may have difficulty fulfilling parental consent requirements; or are poor and have struggled to raise the funds for a procedure that costs, on average, $400 to $500. The latter predicament could become even more common as Barack Obama's health care law takes effect--with provisions authored by Democrats that require insurance providers to drop abortion coverage from various plans.

But Arkansas' anti-choice legislators have already fallen behind. This month, North Dakota passed the most severe restrictions of all, banning abortions just six weeks after a pregnancy begins--sooner than many women even realize that they are pregnant! Gov. Jack Dalrymple admits he hopes signing the bill into law will provoke lawsuits that directly challenge Roe.

Perhaps the fact the legislation is a calculated political provocation explains why it includes troubling provisions.

For example, under the North Dakota law, doctors performing an abortion after a heartbeat can be detected would be subject to up to five years in prison or a $5,000 fine. Yet the bill doesn't specify how doctors are expected to abide by this requirement. A fetal heartbeat can be detected through an abdominal ultrasound at about 12 weeks into pregnancy. The only way to look for a heartbeat at six weeks into pregnancy is to use the much more invasive vaginal ultrasound. That procedure was the subject of mass protests and a national outcry when Virginia tried to make it mandatory to obtain an abortion last year.

BILLS TO chip away at abortion access are nothing new. But the Arkansas and North Dakota measures indicate that we've reached a new stage, where right wing feels confident to challenge Roe outright.

And the right has the Democrats to thank for it. The debate on health care reform in 2009 and 2010 helped open the floodgates for series of anti-abortion attacks.

It was Democrats Bart Stupak and Ben Nelson who demanded that the health care bill include barriers to abortion access in insurance policies offered through the state-level exchanges set up under the legislation. They insisted on a center-stage national debate on exactly how much to limit women's ability to make fundamental choices about our own lives and bodies.

And it was Democrats championed by liberals, such as Nancy Pelosi and Barack Obama, who traded away women's rights in order to get the health care bill passed--even though it will only further enrich medical, insurance and pharmaceutical corporations without substantially improving health care for working and poor people.

The subsequent slew of anti-choice measures has been far-reaching enough to demonstrate to millions of people that the anti-abortion right isn't out to save unborn babies, but to roll back women's rights.

Polls are beginning to show a rebound in support for women's reproductive rights. Today, 60 percent of people agree with the statement that abortion should remain legal. That's a positive development after years of retreat, in which liberal forces like Planned Parenthood have refused to lead a fight to defend abortion.

But we need an organized and vocal movement to go much further and turn the tide. Struggle in the streets forced a Supreme Court packed with Republican appointees to legalize abortion in 1973. Only a return to the streets can ensure that Roe v. Wade survives the right wing's war on women.