Nicole Colson reports on Obama's claim that he will now push to close Guantánamo.

BARACK OBAMA is promising to do something he had the last four years to do, and never did.

Last week, Obama announced that he would close the U.S. prison camp at Guantánamo Bay, Cuba. "It's not sustainable," Obama said at a White House news conference. "The notion that we're going to keep 100 individuals in no man's land in perpetuity" makes no sense, he added. "All of us should reflect on why exactly are we doing this?"

But it's easy to answer "why" Guantánamo is still open today. Because the Obama administration has carried out virtually the same "war on terror" policies--often exactly the same policies--as its predecessors in the Bush administration, including the indefinite detention of prisoners at Guantánamo. Many detainees are even cleared for release, but they instead remain consigned to the hell of the prison camp because of politics in the U.S.

Obama's failure to close Guantánamo remains one of his most prominent broken promises to the millions of people who supported him in 2008 in the expectation that he would set a fundamentally different course from the Bush administration's, including on the "war on terror." 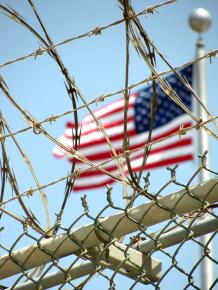 During his campaign for the presidency, Obama criticized the Bush administration's indefinite detentions at Guantánamo. Shortly after being elected, he reiterated those criticisms and pledged again to close the prison. "I have said repeatedly that I intend to close Guantánamo, and I will follow through on that," he told journalist Steve Kroft.

In January 2009, Obama signed an executive order requiring that the prison camp be closed within a year. "The detention facilities at Guantánamo for individuals covered by this order shall be closed as soon as practicable, and no later than one year from the date of this order," read the order.

In December of that same year, with the prison camp still open, Obama accepted the Nobel Peace Prize and repeated his promise yet again in his acceptance speech: "I believe the United States of America must remain a standard bearer in the conduct of war...That is why I prohibited torture. That is why I ordered the prison at Guantánamo Bay closed."

But years later, Guantánamo remains open, and the "standard bearer in the conduct of war" continues to inflict what human rights advocates describe as torture on the detainees who remain.

A HUNGER strike--one of many that desperate detainees have engaged in over the years--broke out among the camp's remaining 166 prisoners in February after prisoners say guards mishandled their copies of the Koran. But media reports suggest that prisoners were also frustrated in the wake of Obama's second inauguration--with no progress or even recent acknowledgement that closing Guantánamo was something the president had promised to do.

"It's escalated because the men are desperate, and they've hit a breaking point," Carlos Warner, a federal public defender from Ohio who is part of a team representing 11 Guantánamo prisoners, told Reuters last month. "Really what is behind all this is the president abandoned his promise to close Guantánamo."

As the hunger strike has grown, the Guantánamo authorities have resorted to force-feedings that prisoners describe as barbaric and calculated to inflict suffering as a form of intimidation. Samir Naji al-Hasan Moqbel, who has been a prisoner in Guantánamo since 2002 and has been on hunger strike since February 10, told the New York Times through his lawyer last month:

Two times a day they tie me to a chair in my cell. My arms, legs and head are strapped down. I never know when they will come. Sometimes they come during the night, as late as 11 p.m., when I'm sleeping...

During one force-feeding the nurse pushed the tube about 18 inches into my stomach, hurting me more than usual, because she was doing things so hastily. I called the interpreter to ask the doctor if the procedure was being done correctly or not.

According to the U.S., at least 27 prisoners are now being force-fed. At least six have been hospitalized for what U.S. officials call "observation," but which is almost certainly to monitor a dangerous drop in weight. So many prisoners are now being force-fed that, late last month, 40 additional medical personnel had to be flown to the prison camp in order to keep up with the feedings.

Such force-feedings are considered by many human rights groups to be an abuse of fundamental human rights. As Marjorie Cohn, a law professor and former president of the National Lawyers Guild, wrote earlier this month:

As Vince Warren, executive director of the Center for Constitutional Rights, commented:

Force-feedings at Guantánamo are nothing new, and much like indefinite detention, the practice has come to define the prison. In 2005, when the first mass hunger strike at the prison took place, the Bush administration also responded by having medical personnel force-feed the men.

Back then, the men were fighting for due process and access to attorneys; eight years later and with more than half the prison population cleared for release by the Obama administration itself, the men are asking for an end to their indefinite detention.

THE LINE put forward by the media and the Obama administration is that these men remain at Guantánamo because of Republican intransigence. But such claims are misleading at best, outright lies at worst.

As Guardian columnist Glenn Greenwald points out, Obama never actually proposed closing Guantánamo. Instead, his administration floated the idea of opening "Guantánamo in the Midwest"--transferring the prisoners to a defunct prison in Illinois. Once Republicans blocked that plan, the Obama administration stopped trying to close down Guantánamo--until now. As Greenwald wrote:

The detainees there are not protesting in desperation because of their geographical location: we want to be in Illinois rather than a Cuban island. They are sacrificing their health and their lives in response to being locked in a cage for more than a decade without charges: a system Obama, independent of what Congress did, intended to preserve.

Obama's task force in early 2010 decreed that "48 detainees were determined to be too dangerous to transfer but not feasible for prosecution" and will thus "remain in detention"; i.e., indefinitely imprisoned with no charges. Given these facts, one cannot denounce the disgrace of Guantánamo's indefinite detention system while pretending that Obama sought to end it, at least not cogently or honestly.

Of the prisoners who remain at Guantánamo, 87 have been cleared for release by the U.S. government. Of those, 57 are Yemeni nationals who remain at the camp because of a decision by the Obama administration--caving to Republican pressure--in 2010 to halt the release of prisoners to Yemen after it was mistakenly reported that two former Guantánamo detainees had been among the leaders of an al-Qaeda offshoot in Yemen that plotted to blow up a Northwest Airlines flight. The Yemeni prisoners have been waiting in a legal limbo ever since.

According to Vince Warren, Obama has more people "force-feeding men whom his own administration cleared for release than he has working to transfer them out." Warren added that Obama already has the authority under the National Defense Authorization Act to "start transferring the men who have been cleared using a national security waiver. He also has the power to lift his self-imposed moratorium on transfers to Yemen."

That these men--some of whom have been imprisoned by the U.S. for 11 years--have had to resort to the threat of killing themselves to even get lip service from the Obama administration is telling about where the president's true priorities lie.

Ramzi Kassem, a City University of New York law professor who represents several detainees, told the New York Times what his client Moath Hamza Ahmed al-Alwi had told him: "I do not want to kill myself. My religion prohibits suicide. But I will not eat or drink until I die, if necessary, to protest the injustice of this place. We want to get out of this place."