Deepa Kumar, author of Islamophobia and the Politics of Empire, makes the case for pushing back against the racist and sexist bullies of cyberspace.

I HAVE spent over a decade speaking and writing about empire and racism. For the most part, this experience has been positive. I have met thousands of amazing people in this country and around the world, and have learned so much from their questions and their experiences.

I have sometimes faced hostile audiences. For instance, in Florida, about a quarter of my audience seemed strangely antagonistic. I later realized that it was because my talk was titled, "The Muslims Are Coming," and they probably assumed that I was the brown Daniel Pipes! Apparently, they failed to read the sub-title of the talk: "Racism and the Politics of Empire."

But despite their aggression (I was interrupted several times during the lecture, and halfway through, four people stormed out in a rage), the majority who did stay listened, learned and then gave me a standing ovation.

In my experience, if you engage people with facts, logic and, most importantly, patience, you can sometimes win them. At least you can shift them a few steps away from where they began because they take their talking points from right-wing bigots whose rubbish can be easily exposed. 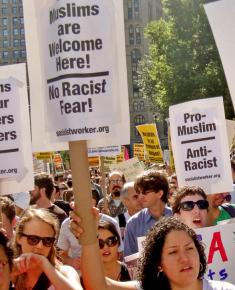 With hate mail and cyber-racism, however, this is largely not possible. Safe behind cyber-walls that guard anonymity, people feel free to spew bile and venom, knowing that they will not be held accountable.

I HAVE received more than a fair share of hate mail/e-mail and cyber-racism and -sexism in the form of comments after my articles on various progressive websites and my talks on YouTube. At first, such missives used to bother me. I saw it as personal attack, not just on my knowledge, but on my humanity, and I felt belittled and angry.

But over the years, I came to realize that this was simply a part of the terrain; the right wing in the U.S. has organized a system by which to intimidate, threaten and silence progressive writers. The threats tend to amp up if you have the audacity to critique empire and racism; and then, if you are women of color doing so, you must be punished and put in your place through recourse to racist, colonialist and sexist invective.

In her recent book Cybersexism: Sex, Gender and Power on the Internet, Laurie Penny observes that, "The Internet is public space, real space; it's increasingly where we interact socially, do our work, organize our lives and engage with politics, and violence online is real violence. The hatred of women in public spaces online is reaching epidemic levels, and it's time to end the pretense that it's either acceptable or inevitable."

Indeed, it is therefore necessary and important to push back against this. As my friend Dana Cloud put it, in her excellent analysis of the hate mail she received, publicizing hate mail creates a "culture of accountability."

Thus, I am sharing here a message I received from "10Serpent," via YouTube, about my lecture on Imperialist Feminism at the University of California-Berkeley:

you are so fucking stupid,
totally stupid, i have seen your clips,
you have no iq at all, totally stupid
you have no education at all, get out of here small stupid primtiive shit
and you ignored the facts of that there is in east even worse things
and that the west didnt use the women as a big excuse when invading,
you are dreaming, you are stupid dirt,
and you dont know history and islam, you stupid dirt
primtiive whore, and islam is demonic sadistic system, that has nothing to do with god, and nothing with the divine.
and vatican made islam. and you are primtiive curryeating small rat, get out of here.
[sic]

WHAT IS striking about this message is not only the bad spelling, grammar and logic, but its complete lack of originality. A few themes recur in the cyber-attacks that I have faced over the years, which 10Serpent predictably repeats.

First, s/he seeks to diminish my intellectual prowess and academic credentials. The word "stupid" is used no less than five times, and in case I miss the point, I am told that I have "no education at all." To stress the point even more, s/he suggests that I have "no iq at all"—a logically problematic statement, since if you are conscious at all and take an IQ test, you will be assigned some score that is greater than zero.

10Serpent twice uses the word "small" very specifically to both metaphorically and literally cut me down to size.

Several cyber-attacks over the years have used a similar trope. I am presented often as someone who does not know what she is talking about, either because I am incompetent or ignorant, or because (in a trope that Dana also raises) I am an "ivory-tower elitist" who is "out of touch" with the real world. The role of such denunciations is both to establish the mailer's own superiority and to discredit my work.

Second, there is a gendered logic to the insults I have received. I have been denigrated for being a woman who dares to challenge racism and empire. 10Serpent refers to me as a "primitive whore" [actually "primtiive whore"] and refutes my well-documented thesis in the imperialist feminism talk by simply announcing that the West has not used women as an excuse to invade other countries.

The unspoken logic here is that a woman who dares to critique Western imperialism and espouse an internationalist feminism must be a "whore" or an otherwise "fallen" woman. Nationalism requires that women defend the nation by being nurturing and supportive. Those who deviate from this norm must be shamed, and in this case sexually shamed.

Third, there is a racist and colonialist logic to the cyber-attacks I have faced. 10Seperent twice called me "stupid dirt." There is a long history of people of color being referred to as no better than dirt and filth.

S/he uses the term "primtiive" three times to assert their national racial superiority in what is a throwback to 19th century racist colonial narratives: "primtiive shit" "primtiive whore" and "primtiive curryeating small rat." Here we have not only a neo-Orientalist notion of the West as superior and the East as barbaric and primitive, but also the use of feces and rodents to further compound the racism.

The neo-Orientalism continues as we see the "clash of civilizations" argument unfold though an assertion that "worse things" exist in the East, such as the "demonic sadistic system" of Islam.

To add spice to my primitivism, the term "curry eating" is added, revealing not only an awareness of my ethnic/national background, but also of racial invectives used in the British context against South Asians.

Finally, the white supremacist solution for transgressive women of color such as myself is banishment. Predictably, s/he ends with the words "primtiive curryeating small rat, get out of here."

Too bad, 10Serpent, whoever you are. My name is Deepa Kumar, and I am here to stay.