Zach Zill and Michael Ware report on a meeting of ecosocialists to discuss how to grow the movement, in a report written for the System Change Not Climate Change website.

AFTER ROUGHLY a year of organizing as the Ecosocialist Contingent and then System Change Not Climate Change (SCNCC), organizers in our coalition came together in New York City on Martin Luther King Day weekend to assess 2013 and plan for the coming year.

Many of us had never met in person. We came from as far away as Vancouver, the Bay Area, Quebec, Chicago, Baltimore, Washington D.C., Texas, Vermont and even Alaska. Our goal was to take the coalition to the next level, strengthening our activism and voice within the broader environmental movement.

While we organized a few successful conferences, established local chapters and participated in several regional and national days of action, SCNCC still needed more political definition and a clearer structure. Too much of our work was ad hoc. The two-day undertaking was a huge step forward for the coalition.

We closed out the weekend with a go-around. Most of the more than 25 participants expressed amazement at what we were able to accomplish and were eager to build out the coalition, popularize ecosocialism, and deepen our involvement in extreme extraction, climate justice and labor work. On the surface, getting activists to a gathering might seem insubstantial, but given the historical sectarianism of the left, the retreat was a watershed. 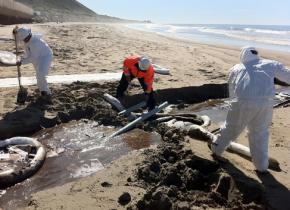 We can only hope that other groups and independent activists join us and that this model of trust, collaboration and principled engagement grows. New SCNCC chapters have sprouted recently in Washington, D.C., and Chicago. Indeed, the formation of SCNCC, Reseau Ecosocialiste and the European Eco-Socialist Action Network, all within the last year, shows the potential for the left to both unite and work with broader forces resisting the capitalist road to ruin.

Given the urgency of combating climate change, we have no choice but to unite if we want a shot at system change. The left must grow rapidly, abandoning the need for political purity and differentiation, tossing aside outdated formulations. For those Marxists among us, we should all have an ecological vision at the heart of our political theory and practice. To ignore the issue would mean certain political irrelevance. At the same time, many new activists could learn from the seriousness, political depth and discipline of socialist organization. SCNCC, we hope, will unite the best of the red and the green.

If you want to get involved with a System Change Not Climate Change chapter or working group, or know more about us, visit the get involved page, or e-mail [email protected]

Lastly, the retreat taught us that there is no substitute for real human interaction. Websites, -email and listservs are valuable communication tools, but spending a weekend together with a good meal and a few drinks made us comrades. This was also true of our conferences and regional mobilizations. As SCNCC grows, we should always make time to gather, discuss, debate, demonstrate, and celebrate our accomplishments. That will help create a left that people want to join.

Attendees included many independents as well as representatives from the Green Party, International Socialist Organization, Solidarity, SYRIZA, the Vancouver Ecosocialist Group and World Can't Wait. Special thanks to Benoit R. from Reseau Ecosocialiste/Québec Solidaire for his helpful contributions.

Below are brief summaries from the retreat, highlighting the main themes and conclusions.

The Current Political Situation in Canada and the U.S.

Fossil fuel extraction in the form of tar sands and fracking not only continues but is accelerating. The ruling class is hell-bent on an ecologically destructive course in pursuit of carbon profits, but also for geopolitical domination of the energy sector. Oil train derailments and pipeline spills will only continue in the rush to get more fossil fuels to market. In addition, the Trans Pacific Partnership under negotiations will not only threaten what little climate regulation we have, but will drive down wages and living standards much in the same way of its predecessor NAFTA.

The evidence and scientific data is now alarmingly clear: Climate change is accelerating, and the threat to people and planet is dire. While there has been heroic resistance, especially from First Nations, it hasn't been enough. So how do we build on that resistance and move beyond the mere transition to renewable energy? We need de-growth, limiting the endless expansion of capitalism in a finite world.

Obstacles include winning workers to our side when many of the best-paying jobs are in fossil-fuel industry. We must fight for demands and reforms in the present while understanding that ultimately capitalism must go.

There is tremendous budding radicalism within environmental struggles, but it comes at time of historic weakness for the left. At times, non-governmental organizations and non-profits are barriers to the type of movement we want to build, but we must be careful to differentiate. Many are hopelessly oriented on the Democratic Party, while others, like some 350NYC organizers, are collaborative and want to build a more radical, grassroots movement. We should continue to participate in mass mobilizations without thoughtlessly tailing big green groups.

The left can grow. We must train new organizers, and broaden the understanding and appeal of ecosocialism with a focus on labor, gender and racial justice environmental struggles. We could run candidates in elections. But whatever we do, we must prioritize working with oppressed groups by going to where they are at, not expecting them to come to us. This is how we can become a more inclusive, less white, less male-dominated group.

SCNCC Thus Far and a Broad Vision for the Group

System Change Not Climate Change is roughly a year old and comes out of long period of defeat and demoralization that has begun to change through the examples of the Egyptian Revolution, Occupy, the Quebec student strike and Idle No More.

Neoliberalism is still dominant, though, and mainstream political opposition has entirely collapsed. Labor is in decline globally, and the working class is largely unorganized. At the same time, the economic crisis of 2008 lingers, driving millions to question capitalism and look for alternatives.

The Occupy movement also left an indelible mark worldwide, forcing the issue of income inequality and the rule of finance into mainstream news. Millions identified with Occupy against the 1 Percent. Taken together, these contradicting tendencies mean we live in a period of contradictions and tension that will remain highly fluid for the near future.

Almost everyone agreed that SCNCC should prioritize working with unions, unorganized workers, women, racially oppressed groups and indigenous peoples. We also congratulated ourselves for the non-sectarian culture of our group, noted how healthy and productive our work has been compared to past experiences. The experience of building SCNCC bodes well for further left unity and collaboration. We are in the process of creating a new brand of revolutionary politics, based on a Marxist interpretation of the ecological crisis.

Many expressed desire to map out what organizations are doing work around the issues that we want to focus on so we can figure out who we know already and who we need to reach out to. We also need a vision of how we get from the current moment to an ecosocialist society--a program. Benoit spoke about the emergence of Québec Solidaire, which begged the question left regroupment, and of either forming an electoral vehicle or working through the Green Party.

We grounded our discussion of strategy by first examining feminism, anti-racism and labor perspectives in relation to environmental work and the growing consciousness around racial and gender oppression. This touched on austerity politics, cuts in public services, gentrification, mass incarceration, deportations, and the general tendency for environmental degradation to strike oppressed groups and developing nations hardest.

Given the Marxist emphasis on the unique and underutilized power of the working class, SCNCC should map out what unions have taken a stand on climate change. There are welcome developments in the labor movement, like Fight for 15, OUR Walmart, and union-led independent politics in Ohio and in the Chicago Teacher's Union.

The organizing call for Climate Convergence, connecting Earth Day--May Day, is something everyone at the retreat wanted to prioritize, as it could bridge labor, immigrants rights and environmental struggles. We will also reach out to Labor Notes to possibly present at the Labor Notes Conference this April in Chicago.

SCNCC members in unions could pass resolutions against tar sands, fracking or other fossil fuel developments. Given the diversity of political opinion in many unions and the gulf that can exist between the rank and file and the union bureaucracy, the first steps for many might be within networks of labor militants, or their creation. Lastly, we should not limit ourselves to the official labor movement. Many new labor campaigns that we should support will involve the unorganized and low-wage workers.

The strategy discussion then shifted to the balance of national versus local work. SCNCC's work is based locally--that's where we'll build relationships and engage in day to day organizing. At the same time, we should continue hosting regional conferences and develop propaganda, art and education material that we project through our main website.

Given the success of the Kshama Sawant Socialist Alternative campaign in Seattle and the lessons from Quebec Solidaire, electoral work could be an effective way to broadcast our political positions and draw people into the coalition. The Chicago Mayoral election and the 2014 elections in New York state could be the first places to test that out, with Howie Hawkins running for governor on the Green Party ticket. While there was not full agreement on how to run candidates, the Green Party of New York is both established and has a ballot line that non-Green Party members could use. In other locations, the electoral vehicle could take different forms.

Given the expansive range of environmental issues, we decided to prioritize and focus SCNCC's work to both engage our target audience (labor, people of color, women, indigenous groups, and students/youth) and to avoid being spread too thin, risking burnout. We will focus on:

We will develop more material around a program and further clarifying SCNCC's demands. Many supported a greater focus on messaging along with the use of art as propaganda, seeking the collaboration of sympathetic visual artists. We want to a uniquely ecosocialist angle to all the work that we do, which is what distinguishes us within the movement.

Members will need to balance national and local work. The latter will vary depending on location. We also felt the need to stake out a clear position on murky topics like "green jobs", that are open to multiple interpretations. A Media and Messaging working group formed to articulate our views on a range of issues.

We would also like to promote a health culture of comradely discussion around strategic questions like a universal basic income, raised in the current issue of Jacobin magazine.