In part two of our series, Zachary Alexis explains why 2018 shattered illusions that there is a plan in place for addressing climate change, and Danny Katch argues for the importance of the student protests last spring against gun violence.

The Climate Doomsday Clock Speeds Up

Zachary Alexis | This year was undeniably bleak for the outlook on anthropogenic climate change, as a series of devastating disasters and brutal scientific reports underlined just how far into the earth’s red zone we have already traveled. Yet the many media hot takes on how “we’re fucked” miss the metaphorical forest for the not-so-metaphorically burning trees.

The real climate story of 2018 is the collapse of the global ruling classes’ consensus around the Paris climate accords negotiated during the Obama era. The 2015 Paris framework dominated headlines and politically disarmed sections of the climate justice movement that bought into the false optimism sowed by elites. 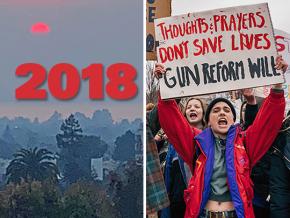 That setup has now cracked under the weight of a right-wing, anti-ecological backlash within the ruling class, personified most notably by Trump and more recently by Brazil’s Jair Bolsonaro. With rising discord among world governments, negotiators barely muddled through last week’s COP 24 conference, delaying all major decisions to future years.

This revival of climate obstructionism in the service of polluting corporations has exposed the fact that, even in an ideal scenario, the voluntary, conservative approach embodied by the Paris summit was insufficient.

Fossil fuel consumption and overall emissions are growing globally, and even the “best” countries aren’t meeting their emissions reduction targets. The ruling class narrative that they have everything under control, and that a market-based strategy would work to address the crisis, is crumbling.

In its place, though, we have a rising wave of resistance, symbolized in the U.S. by the hundreds of youth activists of the Sunrise Movement arrested while protesting in Nancy Pelosi’s office in Washington, D.C. Proposals like Alexandria Ocasio-Cortez’s Green New Deal are helping to push the movement beyond the post-Paris political cul-de-sac.

After years of struggling to articulate a strategy beyond anti-pipeline and divestment organizing, climate justice activists are now coalescing around a positive vision for the future we want.

What this means isn’t yet clear. Some elites are constructing a new narrative that blames lack of progress on climate change on working-class conservatism — for example, France’s “yellow vest” movement or the coal workers of Poland’s Silesia region, where COP 24 took place.

But as the climate movement rebounds in tandem with the rise of a new socialist movement, this strategy is far from a sure bet for the ruling class.

Whether or not the left can defeat this new narrative, place the blame where it belongs on the opulence and profits of the 1 Percent, and build solidarity with the waves of climate migrants that are sure to grow depends on the struggles that emerge in 2019 and beyond.

We must work in the next year to solidify a wing of the movement that clearly and loudly articulates a vision for social ownership and control of energy resources, and that organizes for popular demands against climate disaster: migrant solidarity, post-disaster paid leave for workers, free mass transit, and more.

We must overcome demoralization and despair and organize around the hope of a growing people’s movement for climate justice that is coming to save humanity and the planet from profit-driven climate disaster. With a possible COP 26 meeting taking place in 2020 Britain where Jeremy Corbyn is prime minister, socialists have a tremendous opportunity to link arms with other activists and seize this moment.

The Gun Debate Gets a Left Wing

Danny Katch | On March 14, 3,000 students at Marjory Stoneman Douglas High School in Parkland, Florida, left school at 10 a.m. to mark one month since Nicholas Cruz massacred 17 of their classmates with an AR-15. They were joined by students who walked out at thousands of schools across the country — many of them in the face of disciplinary threats from school officials.

It was toward the end of the solemn ceremony on the Douglas High football field when, according to NPR’s Rowan Moore Gerety, “hundreds of whooping middle schoolers came into view.” Nearby Westglades Middle School had been conducting its own ceremony when a few students decided to take to the streets and head over to the high school.

“I think we all got suspended,” one of the youth told Gerety. “But it’s worth it because I feel like they went to school thinking they were safe. And that horrific day was terrible.”

The rowdy march ended up leading hundreds of students from both schools to a nearby park for an unsanctioned rally. “I think we just decided that standing outside for 17 minutes in our school wasn’t enough,” said another student.

Grassroots protests are often unruly and uncontainable, and that exactly what’s been needed in a gun debate dominated by competing visions of authoritarianism: Cut through the rhetoric and the actual proposals coming from politicians for how to make school safer comes down to a choice between whether to “harden” schools with armed teachers or with more armed police.

At the massive March for Our Lives rally on March 24, it became clear that young people angry about gun violence were breaking free from the apolitical script of a gun control movement that’s been dominated for too long by the likes of ex-New York City Mayor Michael Bloomberg and police chiefs.

Edna Chavez movingly talked about her brother’s death, the trauma she and her family have carried from that day, and the way her South Los Angeles neighborhood has “become accustomed to this violence.” She connected this violence to the police in her school, who “instead of making Black and Brown students feel safe, they continue to profile and criminalize us.”

Chicago’s Trevon Bosley, who also lost a brother to gun violence, pointed to the political neglect at the heart of his city’s homicide epidemic:

When you have a city that feels it’s more important to help pay for a college and sports complex rather than fund schools and impoverished communities, you have gun violence.

When you have a city... that feels we need more Divvy bikes in downtown Chicago for tourists rather than more funding for workforce programs that get guys off the streets real jobs, you have gun violence.

Of course, massacres and everyday shootings continued in the months ahead, even as gun violence protests died down when public attention shifted to other atrocities of 2018, like Trump’s concentration camps on the southern border.

But 2018 was the year that Edna Chavez Trevon Bosley and Parkland students like Emma Gonzalez and David Hogg started a protest movement that led to a surge in laws aimed at reducing gun violence passed by state legislatures in 2018.

And it added something new and vital to the dead-end gun debate between racist vigilantes and centrist technocrats: a genuine left wing.

At the March 24 rally, Chavez said that America’s gun violence requires us to “tackle the root causes of the issues we face, and come to an understanding of how we resolve them.” It’s up to our new socialist movement to take up her challenge in the years to come and put forward an anti-racist and anti-imperialist solution to this country’s gun violence sickness.

2018: #MeToo strikes and terror at the border