A government of, by and for the rich people

The Supreme Court is proving again that U.S. politics revolves around legalized bribery.

In early April, the high court announced a decision in McCutcheon v. Federal Election Commission that strikes down overall limits on political contributions from individual donors, removing one of the few restrictions remaining from reforms passed after the Watergate scandal brought down Richard Nixon in the 1970s.

By a 5-4 majority, the justices ruled that a $123,200 cap on total donations to all candidates, political parties and political action committees during each two-year election cycle is an unconstitutional constraint on free speech. That now-abolished cap is greater than the total household income for two years of a majority of people in the U.S. So it's clear who this ruling is about: the 1 Percent and its very, very expensive "free speech."

The free speech claim is the same one the right-wing majority of the Supreme Court used to strike down previous campaign-finance restrictions--most infamously, Citizens United v. Federal Election Commission in 2010, which overturned regulations on political spending by corporations, industry associations and other bodies. 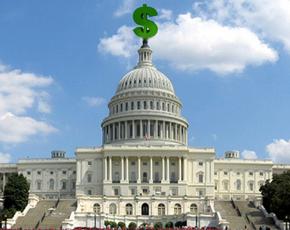 The latest ruling was cheered by such champions of justice and equality as failed 2012 presidential candidate Newt Gingrich, who said it would "equalize the middle class and the rich."

How, you ask? Gingrich didn't elaborate.

He did, however, speak enthusiastically in favor of a concurring opinion written by Justice Clarence Thomas, who essentially welcomed a future challenge to election law to eliminate the cap on donations to individual candidates, which stands at $2,600 per election cycle. "[C]andidates should be allowed to take unlimited amounts of money from anybody," said Gingrich.

In the world of Newt Gingrich, it's a government of, by and for the rich people.

The McCutcheon ruling fits right in with a society where inequality has spiraled to new highs. Outsized political influence purchased by corporations and the rich helps the 1 Percent to claim an ever more disproportionate share of economic output; that massive pile of wealth in turn buys even more political influence; and on and on.

The not-so-secret reality, however, is that the U.S. political system has always been a tool of the richest individuals and businesses--and that has been true no matter which of the two mainstream corporate parties, Republican or Democratic, has the advantage in Washington.

"THERE IS no right more basic in our democracy than the right to participate in electing our political leaders," wrote Chief Justice John Roberts in the majority opinion in the McCutcheon case.

But according to the Center for Responsive Politics, a grand total of 1,715 donors gave the maximum amount allowed to all party committees ($74,600) for the 2011-12 election cycle, and 591 gave the maximum to federal candidates ($48,600). In other words, this ruling will empower the 0.0007 percent of Americans who were supposedly barred from fully participating in the political process because they couldn't give more.

Last summer, John Roberts was also in the majority when the Supreme Court struck down Section 4 of the Voting Rights Act, opening the way for voter ID and other laws specifically designed to make it harder for African Americans, Latinos and the poor "to participate in election our political leaders."

Taken together, the intention of these rulings isn't hard to figure out--curb what little political power remains among the powerless, and remove whatever restraints remain on the powerful. As Harvard law professor Lawrence Lessig wrote:

Already, we have a system in which Congress is dependent upon the tiniest fraction of the 1 Percent to fund its campaigns. I've estimated the number of relevant funders is no more than 150,000 (about the number of Americans named "Lester"). If aggregate contribution limits are struck [as the Supreme Court did in McCutcheon], that number will fall dramatically. More will be raised from a smaller number of contributors--maybe as few as 40,000 (about the number of Americans named "Sheldon").

So abolishing aggregate limits will move us from Lesterland to Sheldon City, increasing a dependence on the funders, while conflicting with Madison's promise of a branch of government "dependent on the people alone."

The truth is that the super-rich already have ways of circumventing campaign-finance restrictions.

Consider casino mogul and multibillionaire Sheldon Adelson. According to the investigative journalists at ProPublica, Adelson spent at least $98 million on the 2011-12 election cycle, mostly through multimillion-dollar contributions to super PACs and other "dark money" vehicles that allowed him to evade the now-abolished cap on total donations from individuals. Adelson gave $30 million to a super PAC supporting Mitt Romney--and, before that, $20 million to the super PAC backing Newt Gingrich's ill-fated campaign for the Republican presidential nomination.

There are more commonplace mechanisms to avoid the individual cap--like "bundling," the practice of businesses funneling "bundles" of the maximum allowable contributions from individual executives, rather than handing over a single check.

"Bundling" was the secret to the fundraising success of the Democratic Obama campaign. The myth was that Obama raised his massive war chest from "small donors" who gave $10 or $20 each. But according to the New York Times, the number of "bundled" donations to Obama's 2008 campaign from wealthy donors nearly eclipsed "the $147 million raised by President Bush's network of Pioneers and Rangers in contributions of $1,000 or larger during the 2004 primary season."

Corporate America and its two political parties were figuring out ways around campaign finance laws before they were even enacted. The Supreme Court rulings like McCutcheon that dismantle those laws only make matters easier for the elite--and expose the system for what it really is: legalized bribery.

THROUGHOUT U.S. history, political power in Washington has been the private preserve of those who can afford it. Mark Hanna--the first modern political fundraiser, who helped the Republican Party to win a landslide victory over Democrats and Populists in the 1896 election--put it best: "There are two things that are important in politics. The first is money, and I can't remember what the second one is."

That's every bit as true today as ever--only the sums are bigger than ever. The average cost of a winning campaign for the House of Representatives--and remember, the overwhelming majority of House races are uncompetitive--was more than $1.4 million in 2008, three times greater than 20 years before.

But in some ways, campaign donations are small potatoes, compared to the real big-money game in Washington: lobbying.

Corporate interests from any and all sectors of the economy have lobbying operations in Washington that work all the days of the year in between Election Day. Unions and political organizations representing liberal causes are free to lobby, too--but they can't come close to the resources of Corporate America.

In 2009, as the Obama administration and Congress were beginning to debate health care legislation, the major health care industry groups were spending an average of $1.4 million--the average cost of a winning House campaign, remember--every single day on lobbying, according to Common Cause. That works out to about $2,600 per day per member of the House and Senate.

The health care industry got what it wanted, too--reform measures that might have threatened profits were kept "off the table," and the proposal that comprised the core of the eventual legislation was written by a former insurance company executive working for Democratic Sen. Max Baucus.

Is it any wonder, therefore, that the mainstream political discussion is confined to an incredibly narrow spectrum that rarely if ever challenges corporate power--and elections become a competition between candidates and parties which agree on the substance on almost every issue, and differ only over details, when they differ at all?

With the Supreme Court unraveling even the inadequate restrictions on Corporate America buying political influence, it's clear that there's no hope for a solution by working within the system. The game has been rigged from the beginning.

But money isn't the only factor in politics. Throughout U.S. history, as around the world, movements for social justice--the labor movement, the civil rights movement, the women's movement, to name some examples--have all achieved significant change, by relying on the power of mass struggle, rather than the deep pockets of the U.S. ruling class. That's where the hope for an alternative to the status quo lies.