Are better schools the solution to poverty?

Gary Lapon examines a popular theme among politicians and the mainstream media.

Education Secretary Arne Duncan says: "What I fundamentally believe--and what the president believes...is that the only way to end poverty is through education." Teach for America insists that "all students can achieve when they are invested in their education, held to high expectations, and are supported by advocates who help them overcome the challenges of poverty."

This is the mantra of the corporate school "reform" movement, accepted across the whole spectrum of mainstream politics and in the media establishment: Fix the U.S. education system, and you fix poverty and inequality.

It seems like common sense--who, after all, would oppose better schools or helping poor children succeed?--a good-faith proposal, from those with the power to do something about it, to confront difficult problems of U.S. society. 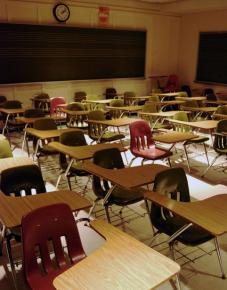 But the mantra is false--an illusion that detracts from the real sources of, and solutions to, both poverty in the U.S. and the crisis of American public education.

IF YOU think about it, the resources to end poverty exist in abundance, and they aren't generally found inside of school buildings.

There are plenty of empty homes to house all the homeless and people living in substandard housing. There is plenty of food, within the U.S. and around the world, to feed everyone who is hungry. The technology exists to keep people--all people--healthy and living longer. Society is rich enough to ensure a decent standard of living for everyone in it.

But accomplishing any of these things depends on a redistribution of the wealth that currently resides in the pockets of the small minority who own and control in this society--many of the very same millionaires and billionaires who, not coincidentally, fund the "reformers" who claim it is necessary to fix education before it is possible to end poverty. History teaches us that the only way the U.S. ruling class has ever parted with even a small portion of its wealth is when it was forced to by struggle from below, particularly the struggles of the union movement.

As left-wing economist Dean Baker wrote at the Jacobin website:

[T]he growth in inequality over the last three decades has not been mainly a story of the more educated pulling away from the less educated. Rather, it has been a story in which a relatively small group of people (roughly the top 1 percent) have been able to garner the bulk of economic gains for reasons that have little direct connection to education.

Everyone deserves a quality, enriching education, free and guaranteed by the government--for many more important reasons than because it could lead to higher wages.

But it is telling that the fix-education-to-fix-poverty crowd supports a school "reform" agenda aimed at the opposite: a narrower curriculum, obsessive emphasis on testing, privatization of public institutions, less power for teachers and students to explore their interests and potential. The reformers want to reshape public schools along the corporate model, with the majority of students provided with the training they will need to remain productive subordinates.

At its heart, the idea of "ending poverty through education" is a new variation on a very old ideological theme of capitalism--if given the chance, everyone can succeed, through hard work and perseverance, no matter what obstacles are thrown in their way.

That dogma has a flip side, though--those who don't succeed have only themselves to blame. Just as the tobacco industry once claimed that cigarettes were good for you and featured doctors in their ads to prove it, the 1 Percent who benefit from a system where poverty and inequality are endemic are attempting to pass off the cause as the cure.

THE IDEA that education is the solution to poverty makes sense if you look at the experience of individuals--but not the social whole.

The highest-paying careers do generally require a college degree, whereas jobs open to high school graduates that once paid a living wage are being eliminated or turned into low-wage work. By definition, individuals in poverty lack the capital to start their own business. So for individuals, the most realistic path out of poverty seems to be getting an education to secure a job that pays well.

For a minority among the poor, obtaining a college degree does increase the chances of escaping poverty. A recent Pew study found that among people who grew up in families in the bottom 20 percent on the U.S. income ladder, college graduates were more than five times more likely to break into a higher earning group.

The problem, of course--as the Pew study acknowledges in a footnote--is that only 11 percent of the people from these circumstances got a college diploma. Their relative success compared to others who grew up in poor families is dependent on being the exception, rather than the rule.

And even for these exceptional cases, attaining a college degree gives them a better chance of making it out of poverty--but it's no guarantee, let alone a solution to poverty as a social phenomenon.

Increasing numbers of college graduates--particularly recent graduates--are working jobs that don't require a college degree. Nearly half a million people working for minimum wage have an associate's or bachelor's degree, according to an analysis of Bureau of Labor Statistics data. Meanwhile, total student loan debt in the U.S. has surpassed $1 trillion, with students graduating with average debt of nearly $30,000.

Look at the question another way: If education was the solution to poverty on a societal level, you could expect increases in educational attainment to coincide with a decline in poverty and inequality. Yet over the past 40 years, the exact opposite has taken place in the U.S.

Despite this increase in educational attainment, however, some 15 percent of people in the U.S. live below the official poverty line today, compared to 12.6 percent in 1970. Over their course of their lives, the vast majority of people in the U.S.--four out of every five--will experience unemployment, near-poverty or reliance on a social welfare program at some point.

Meanwhile, inequality--the gap between rich and poor--has soared to levels not known in close to a century, all as educational attainment has been on the rise.

The situation is likely to get worse, not better--because it doesn't matter how many people manage to get a college degree if the jobs that are being created for them don't pay a living wage, much less an income once assumed for college graduates. According to Labor Department projections, a disproportionate number of new jobs created in the coming decade will pay low wages.

This doesn't mean that going to college no longer makes sense for young people, practically speaking or otherwise. Higher education should be a human right, and its expansion would benefit all of society. But the fact remains that the corporate school reformers' mantra that better schools mean less poverty is false.

ONE OF the main points on the education "reform" agenda is weakening the power of teachers unions, one of the few strongholds of organized labor after decades of decline for the union movement.

Regular readers of SocialistWorker.org will have seen many articles stressing the central role teachers and their unions have to play in saving public schools from the deformers. But for the purposes of this discussion, it's worth underlining the strong evidence that unions are one of the most effective means of reducing poverty.

Not everyone can be a banker or a lawyer. Organized labor provides the means for working people in occupations with less economic or political power to organize for better wages and working conditions on the job--not to mention reforms such as universal health care, retirement security and unemployment insurance, and other initiatives that reduce poverty.

In an article for the Center for Economic and Policy Research, Dean Baker wrote: "There are a variety of factors that affect poverty rates but one that stands out is the power of unions. There is a very strong inverse relationship between the percentage of workers who are covered by a union contract and the poverty rate as measured by the OECD."

Another obvious way to reduce poverty is to fund social programs that help those who can't afford them with access to food, housing and other basic needs; that provide benefits for the elderly and the disabled, that guarantee free or low-cost child care, education and health care, and so on.

Indivar Dutta-Gupta of the Center on Budget and Policy Priorities shows that countries which provide more of these services than the U.S. tend to have lower rates of poverty:

Other similarly wealthy countries [compared to the U.S.] have far lower rates of poverty after factoring in the impact of safety net programs even though, on average, they have similar rates of poverty before counting these programs...That's true largely because nearly all of these other countries do more: their programs are more generous, easier to access, and broader in scope than those in the U.S.

As Dutta-Gupta goes on to say, confronting and reducing poverty is critical to improving public schools, rather than the other way around: "[R]esearch shows that keeping young children out of poverty helps them succeed in school and earn more as adults."

The resources exist to lift all children out of poverty--as they do to guarantee a decent life to everyone, child or adult, and to guarantee a strong public education. The idea that we must wait to address any of these things until educational inequality is ended--the proposals of reformers that are guaranteed to increase that inequality--serves the interests of those who run this unequal society.