Why is Toledo afraid to take a drink?

Haley Swenson and Elizabeth Schulte explain the cause of Toledo's water crisis--and report on the toll on the city's working-class residents.

THE FOURTH-largest city in Ohio was without safe drinking water last weekend--but this was no natural disaster.

Samples taken from the Collins Park treatment plant, which provides water to some 400,000 people in Northeast Ohio and Southwest Michigan, showed the water was contaminated with a toxin called microcystin, the result of an algae bloom caused by an overabundance of phosphorus in Lake Erie, as a result of agriculture irrigation runoff, industrial pollution and other factors.

Boiling the water was no solution--since boiling only made the contamination worse. Elderly people and children were told not to bathe. Water was out of use from early Saturday, August 2, until Monday morning, when officials lifted the state of emergency and told residents the water was once again safe. But they also admitted the problem could re-emerge at any point.

The water crisis led desperate residents to grocery and convenience stores, where they bought as much bottled water as they could find. Residents reported some stores with lines out the door, as well as some cases of price gouging. 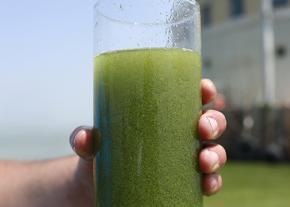 In addition to the desperation of residents to find safe drinking water, local hospitals had to reprioritize to only essential procedures. Some medical facilities were forced to send surgical equipment outside the area to be sterilized.

As Toledo environmental activist Michael Leonardi wrote, the toxic algae blooms are a "manmade disaster," resulting from a combination of factors, including factory farming, sewage and industrial pollution. Heat zones in the waters of Lake Erie--caused by coal burners, nuclear plants and tar sands refineries that use the water along the coast--provide the perfect temperatures for the algae to grow.

The algae blooms, which create the microcystin toxin, are fed by phosphorus, chiefly from manure and chemical fertilizers that run off into the lake from factory farms along the coast. Another contributing factor is phosphorous and nitrates that make their way into the lake through outdated sewage treatment facilities.

The shocking increase of phosphorous levels in Lake Erie has long been a concern of environmental activists and researchers. Toxic algae blooms have become a regular feature in the past decade, but this time, one affected a local treatment plant.

Phosphorus was banned from laundry detergents in 1988, which scientists say helped put a stop to algae blooms for a while. But now they are back with a vengeance--in 2011, the worst algae bloom in recorded history hit the Great Lakes, covering 1,900 square miles with green scum at its height. "We're right back to where we were in the '70s," Jeff Reutter, head of the Ohio Sea Grant research lab, told the Associated Press.

AS USUAL with environmental disasters, the most vulnerable people bore the brunt of the water crisis. Toledo resident and SocialistWorker.org contributor Katrina Bacome described the scene:

On Saturday at 7 a.m., I received a frantic phone call from my mother telling me not to drink our water. Like most other Toledoans we made the mad dash to the grocery store. Our neighborhood is densely packed, poor and working class, with only one major grocery store in the vicinity. The store was out of water. Long lines were forming at the local dollar stores and carry-outs, which had yet to open.

My mother and I were trying to procure water for her and her husband, both disabled; my partner and I, both disabled; and my niece, who lives with her mother, father, grandmother and uncle. We were luckier than a lot of people because we had a functional vehicle between us to search for water.

Eventually, we found a few gas stations just inside Michigan that hadn't been completely cleaned out, and loaded up on individual water bottles (which was a much greater cost). For nine people in three separate households, we were able to collect 39 bottles of water and three large bags of ice. Not knowing how long this would last, none of us felt very happy about the water insecurity of having 13 bottles per household.

The economics of the situation were glaring. On the streets of Toledo, scalpers were selling water from the back of their trucks--$5 for a bottle, $40 for a case. Carry-outs were price-gouging as well, as many of my friends documented on social media during the crisis. There are plenty of folks in Toledo who don't have vehicles, and plenty of places in Toledo and the surrounding areas that lack anything more than a corner store in walking distance.

The situation in southeast Michigan, in places where I grew up like Luna Pier and Erie, in larger towns like Bedford, and in the many small, rural communities dotting both sides of the border, was likely even more strenuous. There is a lot of poverty there, and resources are few and far between...

This experience really cemented in my mind the absolutely critical need for communities to fully control the things we depend on to live. When the ban began, businesses were able to make profits off people who spent money they couldn't afford buying bottled water. Having a society oriented towards profit led some to price-gouge, preying on the poor and vulnerable in their community. While there were water handouts in many areas, these run into the same issues of accessibility that prevented many from being able to buy water at the store.

TOLEDO MAYOR D. Michael Collins and Ohio Gov. John Kasich were quick to declare a state of emergency--and equally quick to claim everything had been resolved by Monday.

Collins was pictured drinking a glass of tap water to reassure residents on Monday morning. But many people weren't convinced. There's no way for ordinary people to tell whether the water is still contaminated since microcystin can't be seen or smelled in the water.

Many experts agree that the crisis is far from over and the water system is far from being restored to long-term safety. Environmental groups have been warning the surrounding area of the potential for such a crisis for years, due to the lack of regulation over local farming practices. To date the only precaution taken by the state legislature has been a voluntary education program about phosphorus offered to local farmers.

And this isn't a problem limited to Lake Erie alone. The Environmental Protection Agency has defined toxic algae blooms as "a major environmental problem" in all 50 states, reports ClimateProgress. At least one-third of the more than 123,000 U.S. lakes larger than 10 acres contain toxic algae.

At the People's Climate March in New York City on September 21, people from around the country will be coming together to demand action on environmental destruction that threatens to cause mass upheaval and suffering in the coming years. The lack of access to safe, clean drinking water in a major U.S. city should be a wake-up call.

As Bacome wrote in conclusion:

What is clear is that it is not just Toledo's water treatment facilities that have failed us, it is the entire capitalist system. While algae blooms can occur normally in nature, this incident stems from years of toxic chemicals from farming and industry leeching into the waters of the Great Lakes. Profit for the bosses was more important to local politicians than the health and safety of more than 400,000 people.