The reactionaries of ISIS are being depicted as uniquely violent and barbaric--but as Danny Katch argues, the most violent force in the Middle East is U.S. imperialism.

OVER THE past six months, the reactionary forces that call themselves the Islamic State in Iraq and Syria (ISIS) won a series of stunning military victories in both countries; carried out massacres and rapes of thousands as part of a war on religious and ethnic minorities; and released a series of chilling videos of the beheadings of Western journalists and aid workers.

The rise of ISIS could be the occasion for political leaders and the media to acknowledge how the violence and oppression unleashed during U.S. wars and occupations have mutated and re-emerged in new and horrible ways. Or they could inject a fresh dose of Islamophobia into the public bloodstream to build support for more war.

The B-list celebrity bigots from the Bush era are seizing the moment. Former New York City Mayor and Republican presidential hopeful Rudolph Giuliani led a protest outside the performance of an opera whose creators had the audacity to portray both terrorists and their victims as three-dimensional characters. Bill O'Reilly used his show to sound the old Fox News alarm that many Muslims support "sharia"--which Islamophobes claim is a sinister legal code for Muslim domination, but in fact is a broad set of ethical principles roughly similar to "living a good Christian life." 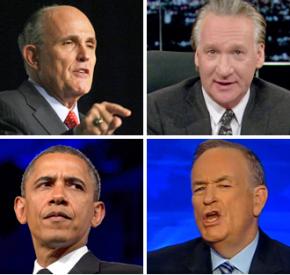 Over on Capital Hill, Democratic Sen. Diane Feinstein declared that "we can't overstate the threat of ISIS" Her colleagues seem to take that as a dare. "ISIS is coming across the Southern border," raved Rep. Duncan Hunter, claiming without any evidence that 10 Islamist militants had been caught by the U.S. Border Patrol. Not to be outshouted, fellow Republican Sen. Lindsay Graham warned that Obama had to take care of ISIS "before we all get killed back here at home."

The hysteria hasn't been confined to the U.S., by any means. French opera singers refused to perform until a woman wearing a niqab, or full face veil, was kicked out of the theater. Meanwhile, British tabloids rained abuse on a student union that voted down a resolution condemning ISIS--even though union leaders said they would support a more clearly worded resolution against ISIS that "did not demonize all Muslims."

All this fire and brimstone is having its intended effect. Polls in early October showed that a strong majority of Americans supported bombing Iraq and Syria, and that over 40% support sending in combat troops.

This is a dramatic turnaround from six years ago, when Barack Obama was elected as a change-making rock star who was promising to end the war in Iraq. Today, Obama is a miserably unpopular--and he's started dropping bombs on Iraq for the third time in less than 25 years.

Six years ago, liberals rejoiced that they finally wouldn't have to listen to any more of George Bush's simplistic cowboy "we're fighting the bad guys" rhetoric. Today, many of them cheered on Obama when he broke out the Dubya-speak at the United Nations: "There can be no reasoning--no negotiation--with this brand of evil. The only language understood by killers like this, is the language of force." Yee haw Barack.

ISIS IS certainly a terrible group. According to a UN report, the reactionary Sunni fundamentalists have murdered over 9,000 people this year and wounded another 17,000. But that's just a fraction of the number of people killed by the Assad dictatorship in Syria since the beginning of the uprising against its rule in 2011.

The barbarism of ISIS beheadings, meanwhile, has been more than matched by the regime in Saudi Arabia, which has beheaded 59 people since the beginning of this year. Then there's Israel, which not only killed more than 2,000 people in Gaza, but did so after years of an economic blockade consciously intended to keep the civilian population on the verge of malnutrition. The blockade continues to this day.

But popular support for the war on ISIS isn't based on rational assessments of the group's ideology and actions. It's about panic--or more precisely, two closely related panics.

The first panic is Islamophobia, which is spread both by right wingers like O'Reilly and supposed liberals like Bill Maher, claims that that a 1,400-year-old religion that has profoundly shaped modern civilization is actually a violent cult, with a secret plan to take over the world. The fact that the main victims of ISIS have been Muslims, including other Sunnis who resist their occupations, doesn't stop the bigots from proclaiming that the ultra-reactionary ISIS is the "true" face of Islam.

Some Islamophobes like Sam Harris and the late Christopher Hitchens are proud atheists and intellectuals. But their bogus theories about Islam are little different from the lies about blood libel that Christian authorities once deployed to whip up pogroms against Jews--or the crude propaganda about Germans, Japanese, Koreans, Filipinos and any other group of people the U.S. government has waged war against over the past century.

The second panic is what Tom Engelhardt calls "terror-phobia." That may seem like a contradiction since there's nothing irrationally phobic about fearing terror. The phobia, as Engelhardt explains, comes with:

the puffing up of an ugly but limited [terrorism] into an all-encompassing, eternally "imminent" threat to our way of life...Terror-phobia...leaves you feeling helpless and in need of protection. The only reasonable response to it is support for whatever actions your government takes to keep you "safe."

In recent years, Americans have been more likely to be killed by their own furniture falling down on them than by a terror attack. Which threat to people in the U.S. do you think comes up more often on the nightly news? Terror-phobia is a real societal condition brought on by exposure to media toxins.

On the night before September 11 of this year, ABC News, apparently worried that its viewers might be too relaxed, warned of a "new and troubling report" that "the risk of a terror attack is at its highest in years." The "troubling report" was based on "no specific plot"--but "the rise of ISIS and all their messages through social media."

A century ago, the Supreme Court issued the infamous Schenk v. United States ruling, which justified denying freedom of speech to people protesting the First World War on the basis that some forms of speech--such as shouting "fire!" in a crowded theater--could create a public danger. Today, however, corporate media outlets have free reign to shout "fire!" 24 hours a day, without even facing criticism--because this is in the service of promoting war rather than protesting it.

ISIS is a genuine threat to U.S. imperialist interests in the Middle East. But it is also a convenient enemy. The Obama administration has struggled to figure out how to dominate the Middle East--a priority for the U.S. government, no matter how high the human toll, that political leaders never question--when the U.S. public is tired of war. Now there is new horrible enemy that the U.S. is promoting almost as much as it is promoting itself.

ISIS makes frightening beheading videos--and the U.S. media broadcasts them far and wide. ISIS leaders make outrageous boasts that would shame pro wrestlers--and American politicians earnestly respond to them as if they were secret battle plans.

Here's Democratic Sen. Bill Nelson of Florida on why we need to attack ISIS: "Any group that sets themselves up as a religious caliphate and says that they will not stop until the black flag of ISIS is flying over the White House--I take that pretty seriously."

There's nothing new about the U.S. government having shared interests with terror groups. The U.S. didn't create ISIS, but it did support and supply the radical fundamentalists who would create ISIS's forerunner al-Qaeda--back when Sunni extremists like Osama bin Laden were on the same side as Ronald Reagan in opposing the ex-USSR's invasion of Afghanistan in the 1980s.

In fact, every major terrorist threat in the region can be directly traced back to U.S. war-making in three stages:

1. The CIA promotes the formation of Islamic fundamentalist guerrillas who would become al-Qaeda in order to fight a covert war against the USSR in Afghanistan.

2. The U.S. occupation of military bases in Saudi Arabia during the first Iraq war turns al-Qaeda against the U.S., leading to a series of terrorist actions that culminated in the September 11 attacks.

3. The U.S. responds to 9/11 by launching wars in Afghanistan, which disperses al-Qaeda to countries around the world--and Iraq, which leads to sectarian civil war that turns thousands of Sunnis toward al-Qaeda and later ISIS.

The most violent ideology in the Middle East is U.S. imperialism, whose dogma was spelled out in the Carter Doctrine--which Democratic President Jimmy Carter articulated in his 1980 State of the Union address:

Let our position be absolutely clear: An attempt by any outside force to gain control of the Persian Gulf region will be regarded as an assault on the vital interests of the United States of America, and such an assault will be repelled by any means necessary, including military force.

Since then, the high priests of the White House and Pentagon have bizzarely interpreted regional powers like Iran to be "outside forces"--while viewing themselves as the ultimate insiders. It is the fanatical idea that the U.S. has the right to control the Middle East and its oil that guarantees endless wars--along with the racist myths that accompany them.

One favorite theme of the Islamophobes is that there are no "moderate" Muslims standing up to terror groups like ISIS, which is absolutely false. What is true is that right now, there are far too few Americans standing up to the terrorism of their own country's racist war machine.