Why are they afraid of Ferguson?

As the whole world waits to find out whether a grand jury will indict the cop who killed Mike Brown, Khury Petersen-Smith explains why resistance is so important.

IN 1820, Thomas Jefferson used a vivid metaphor about slavery that still has relevance today. He was describing his dilemma as a ruler of the U.S. facing the question of Black freedom. The slave owner and former president wrote in a letter to John Holmes, "We have the wolf by the ear, and we can neither hold him, nor safely let him go. Justice is in one scale, and self-preservation in the other."

The "wolf" in Jefferson's analogy represented the enslaved Black population. As someone who was looking out for a country whose existence rested on the enslavement of Black human beings, and who had a personal stake in the system as a slaveholder, Jefferson was not willing to end slavery for the sake of justice.

But maintaining a system that kept an entire section of the population at the very bottom of society had a price. The price was obvious for Black people, but there was a price for the Jeffersons of the world, too: constant fear of the "wolf's" revolt.

The specter of Black rage at injustice was not just a figment of Jefferson's imagination. Slave revolts were common throughout his lifetime and continued right through the Civil War. As historian Herbert Aptheker noted in his landmark book American Negro Slave Revolts, there were at least 250 slave rebellions in American history, with the first occurring in the English colonies in 1663 in Virginia. 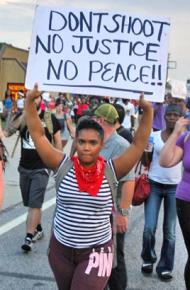 In other words, Black rebellions have been rocking this country since before it was a country.

FAST FORWARD to 2014. All eyes are on Ferguson, Missouri, where a grand jury is expected not to indict Darren Wilson, the Ferguson cop who killed Mike Brown. Missouri Gov. Jay Nixon, a Democrat, has already declared a state of emergency and is mobilizing local and state police along with the National Guard. All of this is in anticipation of protests in response to a grand jury decision that has not yet happened.

Officials' fear of such protest speaks volumes, and it isn't restricted to Ferguson. The FBI issued a bulletin to local police departments across the country warning that protests of the grand jury decision will likely involve "threats and attacks against law enforcement and critical infrastructure." Police preparations coincide with mainstream media like CNN stoking panic by running video of Ferguson business owners boarding up their shop windows in anticipation of "looting."

Why is the federal government so terrified of protest against racism that it would put all local police departments on alert?

There is no evidence of bloodthirstiness among activists for justice for Mike Brown. Organizers are not, for example, threatening "lethal force" the way that a Missouri Ku Klux Klan chapter threatened Black protesters with leaflets in Ferguson. Activists are not making t-shirts calling for the killing of Darren Wilson the way that supporters of the Philadelphia Fraternal Order of Police made shirts demanding the "frying" of Black political prisoner Mumia Abu-Jamal.

As an activist interviewed in the video "A Communique from Ferguson," produced by HandsUpUnited.org says:

Let's put aside the question of why the state would rather pursue a militarized confrontation with protesters than throw the movement a bone by having Darren Wilson arrested. Black resistance to racism is powerful enough to terrify the U.S. ruling elite. This was true in Jefferson's day and it remains true today.

For one thing, the very existence of Black oppression--and especially revolt against it--exposes whatever rhetoric about democracy and fairness that the U.S. happens to be using at the moment to describe itself. Slave revolts raised the inconvenient truth about the U.S.'s racist brutality when Jefferson was proclaiming a republic based on "life, liberty and the pursuit of happiness." And no doubt this summer's rebellion in Ferguson has shattered the notion of a "post-racial" U.S.

But beyond its ability to blow holes in the U.S.'s carefully constructed dominant ideology about race, Black protest has the power to shake the society in ways that achieve actual social change. From the slave revolts to the civil rights movement, Black protest has a way of inspiring and mobilizing broader revolts of the oppressed and exploited, and raising fundamental questions about the nature of U.S. society at the same time.

The civil rights rebellion, for example, cracked open the conservatism of Cold War McCarthyism. It produced a generation of rebels and was integral to the movement against the U.S. war in Southeast Asia. It was a driving force of a decade-plus period of unrest in the U.S. that included the women's liberation movement and a labor revolt. Its radicals worked alongside and in solidarity with the American Indian Movement, and with Chicano and Puerto Rican freedom fighters, among others.

TO SEE the continued power of Black protest, look no further than Ferguson itself. Before the marches in response to the murder of Mike Brown, Ferguson was a small suburb that most of us outside of the St. Louis area had never heard of. The steadfast resistance of Ferguson's residents--and the panicked response of the local and state police forces--catapulted this small town into national consciousness, opening a new conversation about racism in the U.S.

While Ferguson's rebellion was unique, the conditions that gave rise to it are not. The fuel for Ferguson-style defiance--in the form of poverty, high unemployment, and police harassment and violence--exists in every urban Black neighborhood in the country. As remarkable as Ferguson's protests have been, imagine a revolt of that character taking place on Chicago's South Side, or in Brooklyn--places where the scope is much larger and the stakes much higher.

Considering those scenarios reveals why the federal government and city governments nationwide are so afraid. They want to crush this in Missouri before it spreads. This especially makes sense when one considers that it is not just Black America that is ripe for protest. The U.S. working class is suffering lowered living standards--and that is driving disgust with Congress, the two parties and official politics in general.

In declaring a state of emergency in Missouri, Jay Nixon is acting on behalf of the entire U.S. ruling class. From their perspective, the example set in Ferguson cannot be allowed to stand. After all, people as far away as Palestine and Hong Kong have already stood with Ferguson and proclaimed the struggle there as one with their own.

This gets to what is especially chilling for the people who work to maintain the status quo. Perhaps the only thing scarier for the U.S. ruling elite than Black revolt is solidarity with it. The heroism of Ferguson's rebels and the work of activists across the country is laying the groundwork for a deeper revolt against racism and oppression.

The state is betting that through intimidation and the sheer violence of automatic weapons, tear gas, clubs and jails, it can end the resistance. Let's prove them wrong yet again.