The police are different from you and me

Steve Leigh looks at the way capitalism gives cops the unearned authority to bully the rest of the population in the interests of protecting the status quo.

WHO CAN get away with murder in the U.S.?

Let's start with the corporate executives: More than 50,000 workers die from on-the-job injuries and diseases every year. Then there are the politicians, whose mass murder is called "war" and "foreign policy."

Finally, there are the cops. In the past year, police in the U.S. are estimated to have killed over 1,000 people. Young Black men are 21 times more likely to be killed by police as their whites counterparts.

When civilians publicly kill someone, they are quickly arrested, and eventually put on trial and jailed. A significant number face the death penalty. When the cops kill or brutalize, they get special protection. As we saw in Ferguson and Staten Island, there is often a months-long grand jury process during which the police officer walks free, and the victims or victims' families have no representation.

These procedures are set up to ensure that police rarely have to go on trial, much less fear conviction. Often, the only punishment given to killer cops is a paid vacation called "administrative leave," and sometimes relocation to a new department. 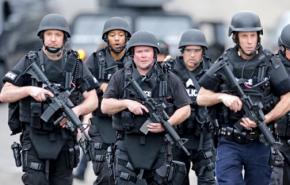 Thus, the murders of Mike Brown and Eric Garner are typical of many police murders, not just because of the role played by racism, but the immunity enjoyed by the killers.

Cops are special in other ways as well. They have the legally sanctioned right to be authoritarian. Who else can order you to leave an area or not enter another? What other public employee can threaten you with legal sanctions if you simply ask what they are doing or why they are doing it? Cops are allowed to break into your house and call it a search--or kidnap you and call it an arrest.

Having grown up with the police system, we are used to the bullies in blue flaunting their authority over commoners like lords over serfs in the Middle Ages. We're used to fearing police reaction when we exercise our "rights." But this is not a normal aspect of all human society. Most of humanity's existence was in non-state societies, without police or armies, courts or prisons.

The role of police in modern capitalist society is to "protect and serve" the wealthy. The police maintain the current class structure, division of wealth and racial hierarchy. They try to prevent challenges to a system in which the richest 1 percent have more wealth than the bottom 95 percent, 85 people own as much as half of humanity, white families have 20 times the wealth of Black families, and Blacks are six times as likely to be imprisoned as whites.

WHEN WE resist this structure, the cops use force to keep it intact. They herd scabs and arrest strikers, kick families out of foreclosed homes, water-hose civil rights demonstrators, and pepper spray and beat rebels against racism and war.

Police authoritarianism serves the 1 Percent. When there is a conflict in society, rather than democratically resolving it among all members involved, our rulers use the governmental apparatus of the police, courts, and military to ensure their interests come out on top.

A society controlled by such an authoritarian apparatus cannot be democratic. This is why better training for the police is not a solution to police violence. When police crack heads they actually are following their training.

Instead of pushing for police to be better trained at the job they do, we should oppose their job altogether. Most people today think police are necessary so we can't expect to build a mass movement with the goal of abolishing the police right away. However, the more the movement against police brutality and racism understands the actual role of police in society and the more the movement opposes that role, the stronger and more effective it will be.

We should support every effort that limits the cops, undermines their authority and forces them to be less repressive. Such reforms could include civilian review boards with real power, stiffer penalties for police brutality, firing cops after one demonstrated incident of racism, and demilitarizing and eventually disarming police forces.

But we should not support supposed reforms like toothless advisory boards and community policing initiatives based on more interaction between police and residents. These are primarily public relations campaigns whose main aim is to build trust between cops and communities that should not trust them.

Even with the best reforms, however, we can ultimately only have a real democracy when power is in the hands of the whole population--not in the hands of a special elite repressive force.

Activists are absolutely right to focus on the racist nature of killings by police to destroy the myth of the color-blind society and make people understand the extent of institutional racism and why it is in the interest of the vast majority to abolish it.

But we also should expose the authoritarianism in these institutions as well. We need to challenge racial profiling, but also the power of the police in general. We cannot have authority in the hands of an unaccountable elite force without an overall authoritarian society.