SYRIZA leaders against the coup

In a statement issued on Wednesday, July 15, 109 of the 201 members of the Central Committee of SYRIZA took a position against the Greek government and the European creditors, calling it "a new Memorandum, with onerous and humiliating terms." The statement came as Prime Minister Alexis Tsipras was pressuring parliament to meet the ultimatum of the European authorities by passing core components the latest drastic austerity measures by Wednesday.

The 109 Central Committee members call on the government "not to succumb to the extortionate ultimatums of the creditors" and warn that the agreement is "not compatible with the ideas and the principles of the left." The statement also demands an immediate meeting of the Central Committee to consider the agreement Tsipras brought back from a European Union meeting last weekend. Tsipras had previously promised to hold a Central Committee discussion on any deal before a parliamentary vote. The smaller Political Secretariat of SYRIZA earlier voted unanimously for a Central Committee meeting to be convened, but it has not been called.

Greek socialists say this statement is also a definitive answer to those supporters of Tsipras and the government who rushed to ask for disciplinary actions against SYRIZA members of parliament and cadres who stood against the agreement. Below, we publish an English-language translation of the Central Committee members' statement.

ON JULY 12, a coup was carried out in Brussels. A coup which proved that the goal of the European leaders was to make an example of a people who had the vision of a different path, away and beyond the neoliberal model of extreme austerity. A coup that takes aim at any notion of democracy and popular sovereignty.

The agreement with the "institutions" was the result of the blackmailing of the country through economic strangulation. It is a new Memorandum, with onerous and humiliating terms of supervision, disastrous for the country and our people.

We realize that suffocating pressure was put on the Greek side in the negotiations, but nevertheless, we believe that the people's proud "no" vote in the referendum must forbid the government from succumbing to the extortionate ultimatums of the creditors. 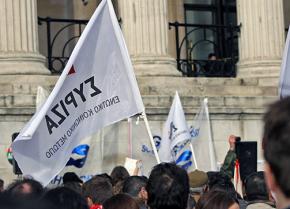 We ask for the Central Committee to convene immediately, and we call on the members, cadres and members of parliament of SYRIZA to stand for the unity of the party on the basis of our Congress decisions and our programmatic commitments.