Bubbles, bounces and busts in China

Charlie Hore explains the factors at play in the dramatic crash of China's stock market, in an article published at the revolutionary socialism in the 21st century website.

EVEN BY Chinese standards, the figures are eye-watering--from a high point in early June, Chinese stock markets have lost over $3.5 trillion to date, almost 15 times the value of Greece's gross domestic product, and there is no end in sight to the fall. Greece's debts, and for that matter the British deficit, look trivial by comparison.

This sharp fall, combined with the effects of the crisis in Greece, has fueled worries about the health of the world economy, and renewed speculation that China's long economic boom may be drawing to a close.

Yet even after the current fall, the overall value of China's stock markets is still up since February. From February to June share values doubled before they started falling again.

The biggest losses have been felt by small investors who piled into the market, believing that it was a license to print money--a belief encouraged by the government, who earlier this year eased access to credit for buying stocks and shares, even allowing people to borrow against the value of their homes. The easy availability of online credit, albeit at very high rates of interest, further fuelled the boom, as did the government's active promotion of new share issues and Initial Public Offerings (IPOs). They did this as part of a more general effort to boost the Chinese economy by increasing consumption, and trying to unlock some of the huge amounts of savings that workers have put away as insurance against medical bills, redundancy and old age. 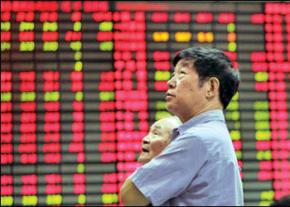 At the start of July, there were some 90 million small investors (slightly more than the number of Communist Party members), many of whom will have lost almost everything they invested. They include 20 million people who only opened share accounts in the last six months, and according to Isobel Hilton in the Guardian, "60 million of them did not finish high school--so mostly migrant workers and the poor in the cities."

The share boom was ramped up by the government encouraging new share issues and Initial Public Offerings (IPOs), and by easing credit restrictions so that people could borrow money to invest either in the money markets or against their homes. They did this as part of a more general effort to boost the Chinese economy by increasing consumption, and trying to unlock some of the huge amounts of savings that workers have put away as insurance against medical bills, redundancy and old age.

BUT SOONER or later, all bubbles burst, and this was no exception. The government threw everything they could at the market, banning state-owned companies from trading, freezing the shares of the most-traded companies, and even appealing to "patriotism" by blaming foreign investors for the drop (in reality foreign capital accounts for only a tiny fraction of the Chinese stock markets). By July 8, Bloomberg was reporting that trading had stopped in over 1,300 companies, representing almost 40 percent of total market value.

It now looks as though the slide has been halted, but by effectively halting most activity. But the government can't be sure that the fall won't start again once shares are unfrozen--and in the meantime many small investors will have been frightened off for good. And this bubble has followed previous bubbles in the property market and in the banking sector, all of which have greatly increased the amounts of bad or dubious debt floating around in the Chinese economy.

How much effect this will have on the real economy remains to be seen. The Economist was broadly right when it said, "Mercifully, the stock market appears to be as disconnected from economic fundamentals on the way down as it was on the way up." Although Chinese economic growth has slowed down to 7 percent a year from the high points of over 10 percent before 2012, it does now seem more stable than a couple of years ago. But there are still major fears about the future of China's economy, which have led in recent months to major falls in commodity prices, which are hitting those economies particularly dependent on exports to China, such as Brazil and Australia (Tom Bramble, an Australian socialist has some very useful overall analysis).

LONG TERM, the more important impact will be political. China's new president, Xi Jinping, already engaged in a major campaign against official corruption, threw his political authority behind both the rise in the markets and the attempts to halt the slide, and his credibility will have taken a significant hit. The Chinese media were instructed to:

discontinue discussions, expert interviews and on-site live coverage. Do not conduct in-depth analysis, and do not speculate on or assess the direction of the market. Do not exaggerate panic or sadness. Do not use emotionally charged words such as "slump," "spike," or "collapse."

However, given the numbers of people involved, there is no way the reality could be covered up.

Ninety million people is about one in 10 of the adult Chinese population, and they will be concentrated in the cities. The last 10 years have seen a major increase in the numbers of strikes, demonstrations and other forms of protests, with the numbers of strikes almost doubling in 2015 compared to 2014, according to the China Labour Bulletin.

Last month there were also major protests over the construction of a hazardous chemical plant in the Shanghai suburb of Jinshan. Over 10,000 people marched over six nights just 40 miles from the city centre, and forced the local authorities to back down completely, to the point of claiming that the plans never existed! This follows a similar victory in 2013 over another polluting factory in the nearby suburb of Songjiang. This time, however, the Jinshan protesters had the confidence to hire buses to take the protest into the heart of Shanghai.

That confidence comes from the knowledge that strikes and protests often win, and rarely attract massive repression. However, almost all such protests (outside Tibet and Xinjiang) are against local managements and local governments, as they are the ones with the power to make decisions. Protests very rarely target the central government, and this does make for a large degree of fragmentation--there's no automatic identification with others fighting back, which makes it easier for the government to ride out local protests.

Any serious protests over the stock exchange, however, would necessarily target the central government, as they were the ones responsible for talking up the bubble in the first place. Much of the Western media has seen their response as disproportionate, but this doesn't take into account just how scared China's rulers are of the ruled.

One very useful recent study, The Challenge of Labor in China, quoted one businessman as saying:

At the moment that's still only potential. But the sheer numbers of people affected by the stock market bubble is an indication of how big that potential is.