Socialism beyond the ballot box

Socialism is about more than just voting for one person in one election. But what else? Eric Ruder looks back at the centuries-old socialist tradition to provide some answers.

That is the truth. People may be uncomfortable about hearing it, but that is the reality. And that is why what this campaign is about is saying loudly and clearly: It is not just about electing Bernie Sanders for president, it is about creating a grassroots political movement in this country.

He promises that if elected president, he would push for tuition-free college education, free universal health care, an end to lower wages for women and people of color, and a living wage for every worker--and that's just for starters. 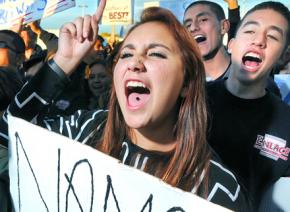 This package of sweeping reforms is both impossibly ambitious--and utterly practical.

It's impossibly ambitious because Sanders would have to fight not just the Republicans who control Congress, but congressional Democrats as well, since they could also be counted on to oppose these reforms as "handouts" that would be "too costly."

But at the same time, all of these reforms are utterly practical because the resources to make them a reality already exist. The only problem is that they are flowing into the wrong places.

The share of national income that goes to wages, for example, has fallen below 50 percent for the first time in 60 years, and in the last decade alone, there has been a shift of about $750 billion annually from labor to capital--truly Robin Hood in reverse.

This highlights one of capitalism's most obscene contradictions: The system has created such enormous productivity increases that it would be possible to pay workers more money for a shorter workweek--yet the exact opposite is taking place. Workers are putting in more hours and getting paid less--while profits grow and the already super rich get super richer.

The labor movement has historically provided a brake on the trickle-up of economic growth, but its steady decomposition means that today, the U.S. has the most extreme inequality in the developed world. To illustrate the point, the amount of money handed out in bonuses alone on Wall Street in 2014 was twice the amount earned by all minimum-wage workers in the country.

OVER THE last 30 years, the worldwide slam-dunk victory of neoliberal capitalism--with its emphasis on free markets, deregulation, cuts in social services, and tax cuts for corporations and the wealthy--explains why a new generation is seeking out alternatives.

But paradoxically, this victory also means that those seeking out socialism as an alternative to capitalism must do so in a political landscape where the term itself is up for grabs.

Some conceive of socialism as nothing more than state intervention in or ownership of the economy--which is why Newsweek famously proclaimed on its cover, in the early days of the Obama administration, when a massive stimulus package of tax breaks and government spending was in the works, "We're all socialists now."

But even state control of the economy doesn't guarantee that society's resources will be used to the benefit of workers and the poor--as the bailout of Wall Street itself demonstrated when the big banks got rescued, but not the homeowners who lost their homes or the workers who lost their jobs.

For socialism to be worthy of a movement to fight for it, it must offer something more than simply a greater role for the state in society's affairs.

Indeed, the state under capitalism already plays a massive role in defending the status quo--from gargantuan military spending to enforcing the tax code with its dramatic shift of the tax burden from corporations to individuals.Specifically, socialism can only work if it is based on the mass democratic participation of working people in managing the day-to-day affairs of the economy and society.

In calling himself a democratic socialist and holding up the Scandinavian countries as a model, Sanders is signaling his allegiance to the tradition of social democracy, which aims to shift the economy by electing socialists into office who can carry out certain changes by legislating from above.

But there are two central problems with this vision.

First, this is precisely the brand of socialism that has retreated as neoliberal capitalism has advanced. The Scandinavian countries, for example, are carrying out some of the fastest and most sweeping privatizations of the last 15 years. Around the world, social democrats have accommodated neoliberalism, not challenged it.

Second, and more fundamentally, the social democratic project has historically made its primary objective the conquest of political power within existing institutions. But this leaves intact the power of capital in the factories, offices, transportation systems and other economic institutions. This means the captains of industry maintain control over society's most important domain, the workplace, where most workers spend a large part of their time. The employers also maintain the power to set wages and benefits.

It's true that Sanders doesn't think putting a socialist in the White House is sufficient, as his Iowa appeal for a "grassroots political movement" shows. Sanders and other social democrats understand that grassroots pressure from workers and social movements is critical in providing sufficient leverage to push past obstacles that inevitably stand in the way of even basic reforms.

In the 1930s, Franklin Delano Roosevelt relied on workers' struggles as an essential part of overcoming the resistance of the American capitalist class to his New Deal legislation.

But a genuine socialist alternative must be based on workers' struggles as the central ingredient in a strategy to transform the economy and society.

AS KARL Marx and Frederick Engels put it 150 years ago, socialism must be "the self-emancipation of the working class"--the mass participation of the majority of society in organizing to take economic and political power away from the superrich and to construct a post-revolutionary society on the basis of mass democracy that extends into every corner of social life.

In that sense, every strike provides a glimpse of workers' power in its most elemental form--the coordinated decision by workers in a particular workplace to withhold their labor.

And when strikes and other forms of workers' protest grow in terms of their duration, militancy and concentration, they begin to accumulate sufficient power to pose an alternative to the capitalist status quo.

The 1934 Minneapolis general strike, beautifully chronicled in Farrell Dobbs' Teamster Rebellion, was the result of a citywide strike by truck drivers that had the power to shut down the city's whole economy.

But the truck drivers went further, using their power to authorize trucks to transport essential goods to meet the needs of the city's working class, while using flying picket lines to stop trucks operated by employers to undermine the strike.

This power of the working class to run society in its own interests--which would require workers in every city to coordinate an uprising against employers on the scale of the Minneapolis truck drivers--must be at the heart of the socialist project.

Total state control over the economy--as the degeneration of the Russian Revolution into the totalitarian regimes of the USSR and the Eastern Bloc illustrates--is meaningless if the people who produce the wealth don't have real democratic control over the fruits of their labor.

Capitalism has made it possible to meet all of the world's needs, but control over capitalism's output remains in the hands of a tiny minority. By placing the means of production under the democratic control of the workers who make the gears turn, socialism offers a way to use society's resources to meet human need.

By putting the workplace at the center of socialist democracy, the direct and daily participation of workers in exercising their voice in all of society's decisions can be raised to the highest level. Workplace councils would have the ability to determine all manner of workplace-level decisions, such as safety procedures, scheduling hours and time off and so on.

And workers would also be in a position to immediately recall any representatives they might elect to higher decision-making bodies at the moment a majority feels that representative no longer represents their will--unlike in American democracy, where it's practically impossible to recall a politician even if they break every single campaign promise they make.

And it should go without saying that elected representatives would be paid the same as their co-workers--thus eliminating the incentive of personal enrichment that animates many seeking elected office today.

ULTIMATELY, THE challenge facing those who want to see a socialist transformation of society is how to coordinate such a massive wave of workers' militancy.

But as the Occupy Wall Street movement's rapid sweep from New York City to practically every city in the country demonstrates, the challenge isn't the coordination of the uprising. The challenge lies in developing durable and rooted organizations that can coordinate a response to the defenders of the status quo.

The Occupy movement was crushed in the course of a couple weekends by a coordinated effort--organized by the Obama administration and predominantly Democratic mayors--to clear its encampments by means of police repression and mass arrests.

A revolution in the control over the American economy, not just public spaces, would obviously entail a confrontation on a far higher level--the American ruling class is not going to simply let workers lay claim to the source of their wealth and power without a fight.

But it's precisely in the course of a revolution that workers themselves learn all the lessons about how society works and begin to internalize the political lessons they need to stand up to capitalism--to learn the lesson of solidarity and to unlearn the scapegoating the divides workers along racial, gender and religious lines.

As Karl Marx put it, "[T]his revolution is necessary, therefore, not only because the ruling class cannot be overthrown in any other way, but also because the class overthrowing it can only in a revolution succeed in ridding itself of all the muck of ages and become fitted to found society anew."