ONE OF the most striking and heartfelt moments during the heavily stage-managed Democratic National Convention in Philadelphia was when Khizr Khan took the stage, his wife Ghazala standing by his side.

In front of a large projection of their son, Capt. Humayun Khan, a Muslim and a U.S. soldier who was killed by a suicide bomber in Iraq in 2004, Khizr Khan challenged Donald Trump's anti-immigrant and anti-Muslim rhetoric. He told the crowd:

If it was up to Donald Trump, [Humayun Khan] never would have been in America. Donald Trump, you are ousting Americans! Asking America to trust you with the future--let me ask, have you even read the United States Constitution? I will gladly lend you my copy. Look for the word "liberty" and "equal protection of the law." Have you ever been to Arlington Cemetery to look at the graves of brave patriots who died defending the United States of America? You will see all faiths, genders and ethnicities. You have sacrificed nothing.

Incredibly, rather than show an ounce of sympathy, Trump lashed out at the Khans--and in particular at Ghazala Khan for staying silent on stage next to her husband, which Trump implied was a feature of her Islamic faith. Then, in an interview with Ohio's WSYX, Trump added that the reason Khizr Khan was upset with him is because "[W]hen you have radical Islamic terrorists probably all over the place, we're allowing them to come in by the thousands and thousands and I think that's what bothered Mr. Khan more than anything else." 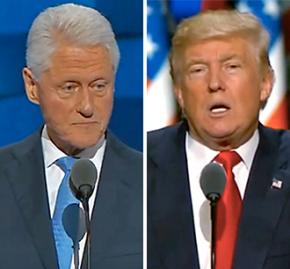 Trump's attack on the Khan family is the latest in a long series of anti-Muslim outbursts that are part of a deliberate strategy to whip up the Republicans' bigoted base, while also promoting a supposedly harder line in the "war on terror." The latest example: Former New York City Mayor Rudolph Giuliani, a Trump adviser, told reporters last week that he wants a President Trump to propose that all Muslims on the federal government's terrorist "watch list" be forced to submit to electronic monitoring, whether or not they've been convicted of any crime.

But while Trump was able to shake off earlier racist rants with the excuse that he "says what he thinks" and is willing to buck "political correctness," his latest eruption may cost him.

Numerous fellow Republicans, including very conservative figures, criticized Trump. After Khizr Khan called on House Speaker Paul Ryan and Senate Majority Leader Mitch McConnell to repudiate the GOP presidential candidate, both released statements defending the Khans and rejecting Trump's call for a ban on Muslims entering the U.S.--though both made the effort not to mention Trump by name.

The backlash within the GOP was so intense that Trump's running mate Mike Pence was wheeled out to issue a mollifying statement. "Donald Trump and I believe that Captain Humayun Khan is an American hero," Pence said, "and his family, like all Gold Star families, should be cherished by every American."

Pence might want to let the orange circus peanut he's running with know that.

TRUMP'S COMMENTS about the Khans' convention appearance have been almost universally denounced. But what passed largely unnoticed in the corporate media was how the Democrats deployed their own "softer" stereotypes and scapegoating of Muslims during the Philadelphia convention--and for the same purpose as the Republicans use their harder brand: building support for the American empire.

The Khans were put front and center at the convention not because the Democratic Party establishment is committed to religious freedom, or wants to forcefully denounce racist rhetoric about immigrants, or plans to repudiate the "war on terror." They were given a platform because they are a grieving military family whose son could be said to have made the "ultimate sacrifice" for his country--which allows the Democrats to portray themselves as a multicultural "big tent" party that is also pro-"war on terror."

For Hillary Clinton and the leaders of the Democratic Party, there is plenty of room in that "big tent" for Muslims...as long as they are the right kind of Muslims: the "good Muslims," in the words of author Mahmood Mamdani. And being a "good" Muslim in the U.S. of today requires embracing the "American Dream" and refusing to question the logic of the "war on terror."

Muslims who oppose war and imperialism; who call out the Democrats, led by Barack Obama and Hillary Clinton, for wholeheartedly prosecuting the "war on terror"; who protest the Democrats' escalation of the drone wars; who demand an end to the Big Brother surveillance state and trumped-up "terrorism" cases--well, those Muslims aren't invited to share the Democratic Party's spotlight.

Nowhere was this more apparent than in the speech of former President Bill Clinton, who called on Muslims in particular to support Hillary Clinton: "If you're a Muslim and you love America and freedom and you hate terror, stay here and help us win and make a future together, we want you."

How is it that, in the only line about Muslims in his entire speech, Bill Clinton only thought to mention Muslims in the context of terrorism? By appealing to the "good" Muslims--the America- and freedom-loving, and terror-hating ones--Clinton stigmatized any Muslim who might not be in lockstep with the "war on terror" as on the other side.

On this score, there's not much difference between Clinton and Donald Trump, who complained on Twitter after Khizr Khan denounced him: "This story is not about Mr. Khan, who is all over the place doing interviews, but rather RADICAL ISLAMIC TERRORISM and the U.S. Get smart!"

Though a Clinton fan, the Atlantic's Peter Beinart was honest enough to call Bill Clinton's line about Muslims a regrettable lapse into "Trumpism":

The problem is in the assumption. American Muslims...should not have to prove that they "love America and freedom" and "hate terror" to "stay here." Their value as Americans is inherent, not instrumental. Their role as Americans is not to "help us win" the "war on terror."

Whether Clinton meant to or not, he lapsed into Trumpism: the implication that Muslims are a class apart, deserving of special scrutiny and surveillance, guilty of terrorist sympathies until proven innocent.

As Beinart pointed out, while the leaders of both parties criticized Trump's bluster about banning Muslims from entering the U.S., few of the same figures, even among Democrats, have criticized the Obama administration for keeping the number of refugees from Syria admitted to the U.S. to a paltry few. "And so, in keeping with that spirit," Beinart noted, "Clinton hedged his opposition to Trump's Muslim ban by suggesting that America should welcome good Muslims, the ones who don't secretly hate America."

IN THEIR efforts to outdo the Republicans as the party of patriotism and big business, the Democrats also prominently featured former New York City mayor--and prominent Republican--Michael Bloomberg, who oversaw the unchecked surveillance of the Muslim community during his tenure as mayor.

As The Intercept reported, the objections of Muslim delegates to having Bloomberg speak at the DNC were ignored by party leaders, who wanted to promote Hillary Clinton's bona fides as a pro-business, tough-on-terror leader.

Linda Sarsour, a New York delegate for Bernie Sanders, pointed out to The Intercept that then-Republican presidential contender Ted Cruz put forward a similar program to the one Bloomberg oversaw, and was widely criticized by Democrats. "How," Sarsour asked, "can we be mad at Cruz, but then give a platform to a former mayor of a city that targeted Muslims for their faith?"

As Imraan Siddiqi, executive director of the Council on American-Islamic Relations of Arizona, wrote at the Mondoweiss website:

The Muslim community in New York City is still reeling from the effects of the NYPD's blanket spying program that spanned beyond the city's borders--throughout the entire Northeast. Businesses were spied upon, informants planted in mosques, students followed to conventions, and a community's trust betrayed. Bloomberg was an ardent defender of this ongoing program that spanned a better part of a decade, even though it was revealed that "zero actionable intelligence" was gathered from spying on Muslims.

It was no surprise then, that Muslim activists expressed strong objections to having the former mayor on a prime-time speaking docket. He's not even a Democrat--but therein lies the strategy. The DNC is trying to court disgruntled Republicans to make the switch for this election, due to the extreme nature of Trump and his campaign. In the end, the request was for naught--and the mayor who alienated so many minority communities got his speaking gig.

On the issue of Islamophobia, the exhortation to vote for the Democrats as the "lesser evil" was used at the DNC to silence voices critical of the party's pursuit of empire abroad and trampling of civil liberties at home. But the "lesser evil" isn't so "lesser."

NO ONE can doubt the Khan family's grief or their righteous fury at Trump's ugly bigotry. But it must be said that they were used to advance a narrative put forward by the Democrats to show that they should be the leaders of the "war on terror," carrying out policies that have killed masses of people around the world and shredded liberties at home.

Millions of people--including thousands of families who have lost their sons and daughters in the wars in Iraq, Afghanistan or elsewhere--have come to question the kind of flag-waving patriotism on display at the Democratic convention, and they ought to have the right to do so without their loyalty being called into question, whatever their religion.

The naked cynicism of the Democratic establishment was unmasked in the instructions to Clinton supporters at the convention to respond to chants of "No more war" with a counter-chant of "USA! USA!"

With the Khan family, the DNC put a Muslim stamp of approval on war crimes in Iraq and the so-called "war on terror." A brilliant tactical move. But the message that a "good Muslim" is one who kills for U.S. empire, oil, and Israel is no less offensive to me than whatever Trump has to say about Muslims or Islam.

All of us--including Khizr and Ghazala Khan--deserve better than what the Democrats are offering.