Aetna's claim it loses too much money insuring sick people is every bit as irrational as it sounds--but so is the whole system under Obamacare, writes Elizabeth Schulte.

THE INSURANCE giant Aetna announced last week that it planned to radically reduce participation in the "exchanges" set up by the Affordable Health Care Act (ACA) for people without insurance from work or a government program to purchase ACA-approved policies.

Aetna management claimed that being part of the exchange--which pulls together various insurance providers for beneficiaries to choose from in a health care "marketplace"--cost the company some $300 million this year. Aetna said it plans to decrease its involvement by two-thirds.

You don't have to be a conspiracy theorist to make the connection between Aetna's pullout from the ACA and the Feds' block on the merger. According to documents obtained by Huffington Post, Aetna CEO Mark Bertolini made the terms of the company's involvement in the ACA clear in a July 5 letter to the Department of Justice (DOJ), responding specifically to a question about how a decision on the merger would affect Aetna's willingness to offer insurance on the exchange: 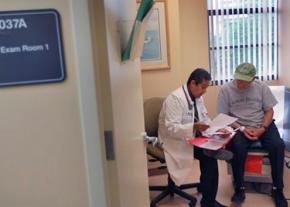 [I]f the deal were challenged and/or blocked we would need to take immediate actions to mitigate public exchange and ACA small group losses. Specifically, if the DOJ sues to enjoin the transaction, we will immediately take action to reduce our 2017 exchange footprint...[I]nstead of expanding to 20 states next year, we would reduce our presence to no more than 10 states...

[I]t is very likely that we would need to leave the public exchange business entirely and plan for additional business efficiencies should our deal ultimately be blocked. By contrast, if the deal proceeds without the diverted time and energy associated with litigation, we would explore how to devote a portion of the additional synergies...to supporting even more public exchange coverage over the next few years.

THE ATTEMPT by Aetna, already the third-largest insurance company, to extort federal government approval for a lucrative merger is infuriating. But so, too, is the underlying premise of the arrangement, regardless of any merger--that Aetna is entitled to make outlandish profits, or it can take its ball and go home.

The fact that Aetna can cite loss of profits as a reason for pulling out of the ACA exchanges underscores all the contradictions of Obamacare that advocates of a single-payer system saw from the beginning. The ACA's stated aim is providing affordable health care to all, while also guaranteeing profits for one of country's most lucrative industries--health insurance. Trying to achieve these diametrically opposed aims was doomed to fail.

The claim that Aetna is losing money is questionable--according to the Huffington Post report, Bertolini assured investors that the exchanges were a "good investment" as recently as April.

But the way Aetna explains its losses, if they're real, is equally telling: The problem, according to company officials, is that they're being forced to cover too many sick people.

Again, this was always the central contradiction of the ACA once the Obama administration refused to even consider a single-payer plan that cut out the insurance industry. The incentive for a private insurer that wants to maximize profits is to limit the amount of money it spends and increase the amount it takes in--thus, to insure fewer sick people.

If the goal is providing affordable health care to people who need it, that's not a job for the multibillion-dollar private health care industry. That's a job for a universal, "everybody in nobody out," Medicare-for-all, single-payer health care system.

Preserving profits for the health care industry and providing health care for the millions of people who need greater access are fundamentally incompatible. But that's what the Obama administration decided to do, against the recommendations of health care advocates who predicted a market-based solution would only exacerbate the problems that already exist in the for-profit health care industry.

WHEN AETNA downsizes its involvement in the ACA, it will have an impact. As of spring, Aetna was covering some 900,000 people in the exchanges, and now many of them will have to seek other plans.

Aetna isn't the only insurer scaling back. UnitedHealth Group announced in April that it was taking itself out of the marketplaces in most states, and last month, Humana said it would scale back to just a few counties.

Most of the non-profit options, like co-ops, have disappeared from the exchanges since the ACA went into effect, leaving customers to choose from among the products of already profitable private insurance companies. And with a few major companies having an even greater monopoly over the marketplace, the cost of health care is simply going up.

For example, after UnitedHealth Group pulled out of several exchanges, premiums rose by as much as $100 a month, according to an analysis by the Kaiser Family Foundation.

The promise of Obamacare was that no one in America would have to go without health insurance because they couldn't afford it. While overdue improvements were made to the existing system--for example, rules barring health insurance companies from refusing to cover people with "pre-existing conditions"--for many people, the ACA not only hasn't lived up to the promises, but it has made things worse.

Those seeking coverage in the exchanges have faced a difficult and time-consuming bureaucracy to navigate for insurance policies with all kinds of hiddent costs, like co-pays that they can ill afford.

As a result, many are still uninsured. According to a report published by FiveThirtyEight.org, some 33 million people, over 10 percent of the population, are still without insurance. They are disproportionately poor, Black and Hispanic--and 4.5 million of them are children.

This year was the first year that taxpayers were required to offer proof that they are insured or pay a penalty--or, as the federal government's HealthCare.gov prefers to call it, an "individual shared responsibility payment."

But some people are "sharing" more of the "responsibility" than others.

The Aetna debacle demonstrates another flaw in the system: If a health care company decides it isn't making enough money off the ACA, it can quit. But if you're someone who actually needs health care, there's nowhere else to go.