Glenn Dunne explains the causes of a shortage of intravenous medicines in U.S. hospitals--and the ways the pharmaceutical industry has manipulated it for profit.

THERE HAS been an ongoing health care emergency in the U.S. for the last few years--and the for-profit system is directly to blame.

Shortages of sterile intravenous medications are widespread and chronic. Fundamental medications such as morphine or hydromorphone (to treat pain), diazepam (used for seizures) and even basic intravenous fluids are either in short supply or are unavailable.

In some cases, the issue is a manufacturing one--as in the case of morphine and hydromorphone.

In the case of IV fluids, an existing shortage of IV bags was exacerbated after Hurricane Maria, when the infrastructure of Puerto Rico, which produced a majority of the bags, was decimated. As CNN reported, Puerto Rico "produces more pharmaceuticals by dollar value for the nation than any of the individual 50 states or any foreign country, has been key to the supply of these IV saline bags."

In response, the Food and Drug Administration had to rush to approve saline products from European manufacturers to prevent a severe shortage, and it considered extending expiration dates to allow a longer shelf life. 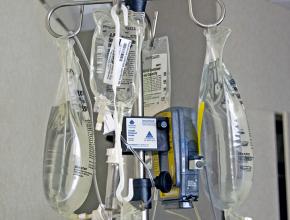 Such shortages are not only a problem because of the immediate lack of the medications and fluids in question. Nurses are being forced to use alternative products that may be unfamiliar, increasing the possibility of medication errors.

Many hospitals also have been forced to purchase medications made by compounding pharmacies, rather than in sterile factories, which increases the possibility of contamination and infection. This risk was highlighted in 2012 when contaminated steroids produced by a compounding pharmacy caused an outbreak of fungal meningitis, killing 76 people.

Hospital pharmacies are also being forced to mix medications that would otherwise be provided in sterile, pre-mixed preparations.

ALONGSIDE THE shortage in medications and fluids has been a large increase in their cost, as pharmaceutical companies have rushed to capitalize on the scarcity.

Normal saline, also known as salt water, is one of the most commonly used hospital supplies, essential for literally hundreds of procedures, which is why you see the bags hanging from IV poles in every medical movie or TV series.

The price of a 250-milliliter bag produced by major medical manufacturer Baxter increased from $1.77 in 2012 to $4.04 today. Price hikes like this increase the cost of medical care for everyone since hospitals use tens of millions of saline bags a year--and pass the costs on to patients.

But under capitalism, this also means bigger profits for the bosses. Baxter's revenue for the unit that produces saline increased by $300 million between 2015 and 2017, due to "select pricing [increases] and improved volumes," noted the Financial Times.

Hurricane Maria made an existing shortage worse. As the Financial Times reported, "Concern over saline shortages in the U.S. arose four years ago when manufacturers struggled to meet demand following a series of quality control issues, such as leaky bags and solution that contained potentially hazardous particles."

But while these shortages were seemingly related to both quality control problems and the damage to Baxter's major plant in Puerto Rico caused by Hurricane Maria, there is a deeper underlying cause: the for-profit health care system.

A series of mergers and acquisitions has reduced the number of companies that manufacture sterile IV medications to essentially three: Baxter, Hospira Infusion Systems and B Braun. These large manufacturers are shielded from any new competition by the massive cost of building a new sterile factory, giving them functional monopolies.

"Quality control problems" mean that monopoly manufacturers with guaranteed markets didn't bother to maintain their factories. This wouldn't be such a problem if these companies manufactured widgets, but in this case, it means that capitalists endanger all of us in their search for profits.

The U.S. Department of Justice is reportedly investigating whether these suppliers worked together to keep the supply low in order to maximize profit.

In Baxter's case, according to the Financial Times, company sales reps told one large New York hospital group in 2014--as the shortage was becoming more pronounced--that the company couldn't guarantee the supply of saline to the hospital unless it signed a five-year contract that required it also to buy other things, like IV tubes.

BEYOND THIS, supply "shortages" don't explain the price increases in many other medications.

Nitroprusside, for example, is an intravenous medication used to decrease blood pressure in certain medical emergencies. It's a generic medication that been used since the 1920s and is on the World Health Organization's "List of Essential Medications."

The case of so-called "Pharma Bro" Martin Shkreli--who was recently sentenced to seven years in federal prison and $7.4 million in fines for securities fraud after profiteering off of the drug Daraprim--made headlines.

But Shrkreli is only the most extreme example of what has become a common practice--a company buying up all the rights to manufacture an old, generic medication, and then using a monopoly to jack up the price.

Drug companies publicly claim that they need monopoly pricing and high prices to pay for research and development, but these capitalists use the same strategies to push up prices on life-saving drugs even when all the research was done generations ago. As the Financial Times put it:

[T]he saline shortages are a microcosm of a broader crisis in the American health care system, which is reliant on small groups of for-profit companies--and sometimes a single company--for some of the most essential supplies. In the absence of a medical regulator that controls prices and marketing practices, such companies enjoy power that is unparalleled elsewhere in the world.

We need get rid of these parasites and build a health care system that prioritizes care for everyone, not profits for the 1 Percent.