The presidential race to the bottom

APPARENTLY, THE universe does have a sense of humor.

After blaming his poor showing in the first presidential debate on problems with his microphone, Republican presidential nominee Donald Trump's candidacy is swirling around the toilet bowl and headed toward that final flush because of comments that a different microphone did pick up.

Trump went into the second debate with Hillary Clinton on Sunday night needing the impossible--for millions of people to forget the revulsion they felt when they learned about his casual misogyny in an unearthed 2005 recording.

As a spoiled child of wealth who became famous as a reality TV bully, Trump reacted in character: He tried to turn every accusation around and redirect it at Hillary Clinton or Barack Obama or the news media--or, better yet, at some defenseless scapegoat who won't be able to answer back in the coming days.

As loathsome as it was to watch, Trump may have succeeded in shoring up his core support among right-wingers and blunting the attacks coming at him from Republicans worried that he will endanger the GOP's chances all the way down the ballot. 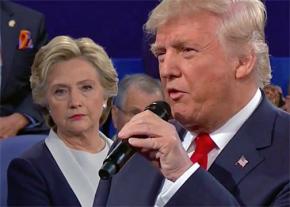 But what's almost as incredible as Trump's persistence in lying and conning was Hillary Clinton's inability to respond effectively to an opponent who was already the most unpopular major-party presidential candidate in modern history before the latest cascade of outrages.

Clinton is the political representative of a social status quo that has made millions of people bitter about their declining conditions of life and work. She celebrates as a badge of honor her long career in a political system those millions view as corrupt. And her strategy to become president isn't to stand for something people want, but to not be what they don't want: she's the not-Donald-Trump.

Clinton's opposition to Trump's reactionary obsessions is as narrow as possible, so she won't have to commit herself to anything like taxing the rich, protecting people from the health care profiteers or welcoming refugees from the violence of wars that the U.S. caused.

With an opponent as disgusting as Trump, that strategy may win Clinton the White House. But it won't stop the political discontent that Trump exploits and channels toward the right--and it sure won't accomplish anything positive in a society that needs social change badly.

BY NOW, everyone has heard the story, if not the stomach-turning audio itself: In 2005, a live microphone picked up Trump's sickening comments to Access Hollywood "reporter" Billy Bush (and yes, he's one of those Bushes; he's a cousin of George and Jeb).

Trump regaled Bush with a story about how he tried and failed to "fuck" Bush's colleague Nancy O'Dell--and then bragged that he committed sexual assault whenever he felt like it, because "when you're a star, they let you do it. You can do anything...Grab them by the pussy. You can do anything."

Trump claims this was all just "locker room banter," and the media response, at least at first, was to call his comments "lewd" or "tawdry." The real problem, of course, is that Trump was describing himself committing a crime: sexual assault, which is what groping a woman without her consent is.

This is the real Donald Trump that everyone knew existed behind the trappings of a candidate running for president. And once the dam broke, there was a tidal wave of sleaze to follow--too much for us to go through here, even if we wanted to, which we don't.

But the question that probably occurred to you was: Why is this outrage upending the Trump campaign when there have been so many others?

Trump's despicable misogyny can't come as too much of a surprise after the toxic spew that's come out of his mouth throughout the never-ending presidential campaign: racist comments about Mexican immigrants; calls for banning Muslims from entering the U.S.; attacks on the parents of a Muslim U.S. soldier killed in Iraq; sexist rants about any number of women, from Rosie O'Donnell to former Miss Universe Alicia Machado.

Trump's unapologetic sexism, racism and Islamophobia--not to mention his smug sense of entitlement and general stupidity--are all part of the amalgamation of repulsive qualities that is Donald Trump.

In fact, the day that news of his Access Hollywood comments broke, Trump declared that he still believed the Central Park 5--five young African American men falsely convicted in the 1989 Central Park Jogger case, who spent years in prison before being exonerated--to be guilty.

At the time of the trial, Trump was one of the loudest voices baying for blood--he even took out a newspaper ad calling for reinstatement of the death penalty in New York.

AFTER THE Washington Post article about the tape appeared, the response was immediate. Republicans distanced themselves from Trump and even un-endorsed him. The Republican National Committee placed a moratorium on any spending to help the campaign at the top of the GOP ticket.

Though stopping short of un-endorsing Trump, Republican House Speaker Paul Ryan disinvited Trump from a joint campaign appearance and castigated him in a statement, saying, "Women are to be championed and revered, not objectified. I hope Mr. Trump treats this situation with the seriousness it deserves and works to demonstrate to the country that he has greater respect for women than this clip suggests."

Neither Ryan nor the other Republicans (and Democrats) who expressed similar sentiments seemed to grasp that paternalistic language about women needing to be "revered" is the flip side of Trump's ugly sexism--another way of denying women their rights and objectifying them, if in less vulgar language.

If anyone was wondering, Paul Ryan is no friend of women's rights. He voted against paid parental leave and equal pay for women, and for harsh restrictions on abortion, including legislation that would have allowed hospitals to deny women abortions in emergency situations, even if their life was in immediate danger. His female constituents must feel very "championed."

Among the political establishment in Washington, it seems that Trump's vulgarity is the real problem--because it shows that he lacks "presidential character."

But what do they say about the "character" of the dozen U.S. presidents owned slaves, including eight while they were in office?

Other U.S. presidents can only be described as genocidal in their pursuit of the American empire--for example, Andrew Jackson's lengthy list of crimes against Native Americans, Theodore Roosevelt's slaughter in the Philippines, and there's plenty more for that list.

Anyone who thinks Trump-style sexual abuse is unknown in the political arena needs to be reminded about the treatment of Anita Hill when she testified before Congress about the degrading sexual harassment she suffered at the hands of Clarence Thomas. Hill was put through the wringer--and Thomas was confirmed to become a Supreme Court justice.

Then there are the decades of stomach-turning sexist behavior from segregationist Sen. Strom Thurmond--something typically laughed off more than taken seriously.

PART OF Trump's diversion tactics has been to raise the many scandals involving Bill Clinton. During his "apology" over the weekend, Trump declared: "I've said some foolish things, but there's a big difference between the words and actions of other people. Bill Clinton has actually abused women, and Hillary has bullied, attacked, shamed and intimidated his victims."

There's no reason to believe that Trump only "said some foolish things." But at the same time, liberals shouldn't exonerate Bill Clinton just because his chief accuser today is a serial sexual abuser himself.

In recent weeks, Trump has slung mud at the former president for having consensual affairs--a 12-year relationship with Gennifer Flowers and, of course, his affair with White House intern Monica Lewinsky, which led to the Republicans' impeachment circus.

But hours before the Sunday debate, Trump appeared at a press conference with three women--Kathleen Willey, Juanita Broaddrick and Paula Jones--who accused Clinton of sexual harassment and assault.

The attitude of most Democrats--including Hillary Clinton--toward these allegations has been to slander the women who came forward. As Elizabeth Schulte wrote last week for SocialistWorker.org:

In the end, the Democrats' main concern during the Clinton era wasn't addressing a possible case of sexual harassment, but protecting the Clinton administration at all costs--and often enough, the importance of keeping a Democrat in the White House to "defend" women's rights was part of the argument.

Paula Jones' accusation of sexual harassment ended with a judge dismissing her case, not on the basis of whether the charge was true or not, Schulte writes, "but because Clinton's behavior, while 'boorish and offensive,' in the words of the judge, amounted to 'brief and isolated' episodes, which are apparently acceptable between an employer and an employee." As Schulte concludes:

[T]hink of what the Paula Jones decision says: A judge has ruled that an employer who sexually harasses an employee may be "boorish," but the offense isn't serious enough to have its day in court. That has an impact on all the women who face sexual harassment in workplaces every day--and on their bosses' and co-workers' attitudes toward harassment.

AMONG THE many news stories that got drowned out in the tidal wave of attention directed at Trump last weekend was what should have been a debilitating scandal for Hillary Clinton.

On the same day that the Post article about the Trump video appeared, WikiLeaks released transcripts of speeches that Clinton, then recently resigned as secretary of state, gave to Wall Street banks and investment firms in 2013 and 2014, with a price tag of hundreds of thousands of dollars for each appearance.

The transcripts reveal everything that Clinton critics like Bernie Sanders and so many others knew they would: the already odds-on favorite for the Democratic presidential nomination promised the banksters they'd have a friend in the Oval Office if she was elected.

Specifically, Clinton promised to give Wall Street veto power over any further financial reform--because, after all, she told the no-doubt-delighted audience at Goldman Sachs, "[t]he people that know the industry better than anybody are the people who work in the industry."

During the Democratic primaries, Bernie Sanders demanded again and again that Clinton at least acknowledge what she said during her six-figure conversations with the casino capitalists of Wall Street.

But Sanders has been silent now that he has proof of what he guessed all along--because the self-declared socialist and scourge of Wall Street isn't interested in criticizing Clinton now that defeating Trump is priority number one. Trump's sickening sexism is providing cover for Sanders as much as for Clinton.

In another leaked recording, Clinton, while speaking at a Virginia fundraiser, downplayed the kind of progressive goals that Sanders put forward in his primary campaign, like "free college" and "free health care."

"I am occupying from the center-left to the center-right," she said. "And I don't have much company there. Because it is difficult when you're running to be president, and you understand how hard the job is--I don't want to overpromise. I don't want to tell people things that I know we cannot do."

But the problem isn't what we "cannot do"--the problem is the political priorities of people like Hillary Clinton and others at the top of the system. Clinton may excoriate the Republicans over Trump's words and actions today.

But the reality is that as president, she will uphold a political status quo that only enables the Republicans shift to the right and caters to the interests of the 1 Percent--unless a left-wing movement rises from below to challenge the whole two-party system.