How did we get the misogynist-in-chief?

Trump's sexism was repulsive during the campaign--but the best Hillary Clinton offered, even on the issue of women's rights, was the status quo, writes Elizabeth Schulte.

FOR MILLIONS of people across the country, the realization that Donald Trump will actually become president has produced fear, worry and questions--lots of questions.

There are big questions about what it means for reproductive rights--since Trump pledged to appoint Supreme Court justices who will overturn Roe v. Wade and to sign a ban on abortion after 20 weeks. There has been a recent surge in women switching to longer-lasting birth control methods, like intrauterine devices (IUDs), while they are still covered under the Affordable Care Act.

Others ask how survivors of sexual assault and those who face harassment on the job will be treated in this new era in which the president of United States was caught on tape bragging about sexually harassing women, grabbing them "by the pussy" whenever he wanted.

This is a setback, and not just because Donald Trump will be in the White House and the Republicans will have a majority in Congress. Another reality is that the misogynists who voted for Trump will be further emboldened to act by his victory. 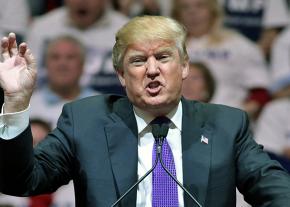 Even before the election, the Trump campaign, with its fake populist veneer, provided a voice for some of the most backward ideas of sexism and racism. But the truth is that there wasn't a voice for our side in the general election this November.

Hillary Clinton--with her hawkish, pro-corporate record--didn't provide an alternative that people could be enthusiastic about. This led to a decline in turnout by Democratic voters that barely gave Trump the edge in the Electoral College, if not the popular vote.

While the Clinton campaign talked about the historic breakthrough that a first woman president would represent, it largely relied on the fact that voters who cared about issues related to women's rights had nowhere else to go--and would do anything to keep Trump out of the White House.

The best Clinton had to offer was the status quo--that, for example, she wouldn't attack reproductive rights like Trump would, but not that she would reverse the tide of anti-abortion restrictions passed into law over recent years.

Fortunately, the protests against Trump--for his sexism, but also his many-fronted war against immigrants, Muslims and people of color--began immediately after the election. Tens of thousands of people have already taken to the streets around the country, and many, many more are making plans to be in Washington, D.C., to protest Trump's inauguration on January 20 and attend the march for women's rights the day after.

Figuring out what happened in Election 2016 has implications that go further than last November 8. They go to the heart of the kind of organizing and politics needed to ensure that no one can turn back the clock on women's rights.

THERE CAN be no downplaying of the vile brand of sexism that Trump fueled with his campaign. In a country where women's inequality is woven into the fabric of society--from the disparity in pay to sexual harassment at work--ideas that reaffirm women's supposed inferiority are a necessary part of the package.

A section of Trump supporters definitely embraced this part of the candidate's message. From the sexist attacks on Clinton herself to the idea that Trump's abuse of women was just "locker room talk," the campaign galvanized people who chose the wrong side on the question of sexism.

It's also the case that the sexism of the Trump campaign fused with a general rejection of Clinton as part of a powerful political dynasty with deep ties to wealthy corporations. The result was a toxic brew of ideas that blame the wrong people for hard economic realities.

While Clinton won among traditional bases of the Democratic Party--poor women, young women, Latinas and Black women--she turned out fewer of them to the polls. And the real shocker came when exit polls showed that Clinton lost among white women voters by 10 percentage points--and among white women without a college degree by 28 points.

In the aftermath of the election, some liberal commentators are trying to blame those on the left who didn't come out for Clinton and either stayed home or voted for the Green Party's Jill Stein. But this doesn't answer the question of why so many women would vote for Donald Trump.

First, it's worth pointing out that sexist ideas don't just exist among men. Plenty of women also hold backward and divisive ideas since they, like men, live in a sexist society. But there's more than sexism at play here.

It wasn't that voters didn't take Clinton's feminist message seriously. It was the brand of feminism she represented.

Clinton's chief priority on this question is about women achieving positions of power and influence--her cohorts in this are people like former Secretaries of State Madeleine Albright and Condoleezza Rice or Facebook CEO and LeanIn.org founder Sheryl Sandberg.

While it is another consequence of the sexism of U.S. society that there aren't more women in positions of power or in the White House, this doesn't mean that the vast majority of women would all win if someone like Hillary Clinton got to occupy the White House.

AMONG SOME working-class women, Clinton was perceived as not representing them, but those at the top of society, women and men both--the people who have profited while their lives have gotten worse.

When the woman you're supposed to vote for opposes a $15-an-hour federal minimum wage, sat on the board of Walmart, helped shred welfare and okayed a coup in Honduras, it's hard to get enthusiastic about so-called "sister power"--unless you're one of the women that Clinton does represents.

In an interview before the election published at Vox, historian Stephanie Coontz described how women facing economic precariousness were often hostile to a woman like Clinton whose fortunes were rising as theirs were falling. "[W]hen they hear feminists talk about the glass ceiling, they don't see that as the main issue," Coontz said.

That helps explain why many people didn't see it as critical that they go out and vote to have the first woman president in the White House. In addition, when poor and working-class women's real concerns are left out of the political discussion--as they largely were by Clinton's top-down politics--it can reinforce pessimism about things getting any better and create a greater opening for conservative conclusions.

Coontz situated Trump's popularity in the deterioration of the living standards for the working-class family since the 1950s and '60s, alongside the increasing fortunes of those at the very top of American society. The decline was felt by the whole working class, and low-wage workers in particular.

These conditions made some low-paid workers an audience for ideas about how immigrants or Blacks taking away their jobs, as well as conservative ideas about the traditional family. As Coontz argues:

[T]he fact remains that women who have the fewest opportunities to compete successfully in the labor market are the ones who are much more likely to support the policies and values that reward a traditional division of labor in the household.

Women with more social, economic or educational capital are much more likely to support the activities of women making their own way in the world, to be proud when they see powerful women who stand up or who are getting ahead of men in any way, and they're also much more open to supporting social policies that reward individual initiative even if they know that it's not always rewarded equally...

The highest proportion of stay-at-home mothers in this country of any group--the only group where a majority of them are stay at home--is among women married to men in the bottom 25 percent of the earnings distribution. This is very typical of the South in the low-income areas that Trump is talking to. These women don't have enough education or opportunity to earn wages that can pay for child care and transportation and work clothes.

So this is the one place where you get a lot of stay-at-home wives--or wives who do take jobs, but they are crappy jobs that pay low wages and don't have family-friendly policies, so they'd prefer not to be working.

Thus, when Trump took aim at prominent women like Clinton or Fox News' Megyn Kelly, claiming that they were just taking his "locker room" too seriously, he managed to get some hearing for the idea that these women have gone "too far." In the end, some voters decided to look the other way about Trump's demeaning behavior toward women and vote for him anyway.

Meanwhile, the Clinton campaign hoped to benefit from revelations about Trump's pattern of sexual abuse, but it never seriously addressed sexism or sexual discrimination in U.S. society, much less the prospects for women actually gaining equality beyond her getting into the White House.

MANY PEOPLE who were ready to celebrate when it looked like Clinton would defeat Trump are understandably disappointed that she could lose, especially to a vile misogynist. They ask a deeply felt question: What will it mean that the U.S. rejected the chance to elect its first woman president?

But in some ways, the question is the problem. If your measure of equality is limited to getting a woman in power, regardless of whether she supports other progressive aims, then you're in trouble already.

From the point of view of the business and political establishment, Hillary Clinton was, indeed, the perfect candidate for the job of U.S. president--with her decades of experience managing the status quo and building ties with corporations and foreign leaders abroad, and her ability as a Democrat to make austerity go down easier with U.S. workers.

The problem is that a growing section of the population is starting to reject "perfect" candidates like Clinton. They are also questioning the narrow confines of the two-party system and the policies of the U.S. government itself.

This presidential election further revealed the growing gap between what the establishment in Washington calls "politics" and what the rest of us are concerned about.

On the question of women's rights, that's reflected in a growing number of young women and men who are looking to organizing from the bottom up and addressing head-on the issues that affect women's everyday lives: protesting university administrations that ignore reports of rape, standing up to restrictions that threaten to close clinics in Texas, taking on sexual harassment on the job, and fighting for a $15 minimum wage.

Democrats like Hillary Clinton and the liberals who tried to chastise activists into voting for her act like they're the only thing standing between us and the total destruction of our rights under Trump. They act like we failed them--when they failed us.

The reality is that we are the ones standing up against Trump, and we'll be stronger by linking together the struggles that affect all of us, immigrant, Muslim, Black, white, LGBTQ, men and women--and building an opposition strong enough to take on whatever the Republicans and Democrats throw our way.