Ready to do what’s right in Standing Rock

One of the most powerful statements of solidarity for the water protectors protesting the Dakota Access Pipeline was the self-deployment of veterans, who came to Standing Rock hoping that their presence would help deter the violence of the federal government, North Dakota law enforcement and private security hired by the pipeline builders.

Aurora Child is a Navy veteran who enlisted in 2001 after the September 11 attacks and did two tours to Iraq and the Persian Gulf through 2006. With thousands of veterans due to arrive the next day--and before the news spread on Sunday that the U.S. Army Corps of Engineers had denied a needed permit for continued construction on the pipeline--she talked to Lichi D’Amelio in the Oceti Sakowin Camp about what brought her to Standing Rock.

WHAT BRINGS you to Standing Rock?

THE FIRST word that I can think of is spirit.

The Diné (Navajo) brought me into ceremony, and they've been helping me work out so much of my stuff from being a vet. But I found out what Native people believe about veterans, and also more about what's happened to Native Americans.

When I was serving in the military, I quickly realized that things weren't quite how they said. When I was young, I believed that the U.S. helps people get freedom and helps people find democracy. But then, when we were over there, we were fighting for oil, and everybody knew it.

I saw them bomb Fallujah from my ship, and they killed thousands and thousands of people for oil. That's how I feel about it. I participated in that, and I haven't been right ever since. 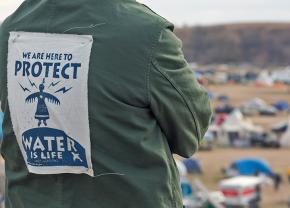 So I really wanted to come, and when I was looking for other people to come with me, I found out about the veterans coming to Standing Rock, and I thought that was perfect. A lot of veterans' struggles are very similar to Native struggles, and a lot of Native people serve in the military.

Honestly, I feel like Native people love this country more than anybody. It's really something to be ashamed about--what's gone down in these communities and how there's never been any action taken to make things right. And to see it continue in this day and age, when we think we' re so open and free--but it's really only a certain percentage of people who live like that.

I came to try to give something back--anything. I think that of any of the communities in the United States, these communities are the ones that have made us everything that we are. None of us would be here, and none of our lifestyles would be the same if all these people hadn't died.

This is a much bigger battle than just stopping that one pipeline. I'm aware of that, and I know that a lot of other people are aware. Even if we do stop this pipeline, it's just the beginning of a really big battle, and I'm in it to win it.

WHEN THE veterans' deployment arrives tomorrow, what do you expect to happen?

I HAVE no idea. What the veterans have been talking about and hoping for is that if enough of us are on the ground here, it won't be an issue--that the pipeline builders will stand down. Their lease is up in January, they're in trouble, and they know it.

I think the veterans' presence is going to be intimidating. I bet a lot of the guys on the DAPL side are vets, and they're going to feel kind of ashamed about what they're doing.

I think that's the benefit of having the vets here in the camp--we know what it feels like to be on the wrong side. Most of us will probably never do that wrong thing again. This is our opportunity to do what's right and get a little redemption for ourselves.