I spy with all your little eyes

In his column for Inside Higher Ed, Scott McLemee reviews a book that traces the history of government efforts to recruit "citizen spies" and foster a surveillance society.

IT WAS the working conditions of Soviet spies in the TV program The Americans that really drove home to me how pervasive and taken for granted the surveillance of public space has become.

Set in the Washington area during the 1980s, the show focuses on central characters who are extremely deep-cover agents--the pride of the KGB academy--and who seduce, betray, compromise and (when necessary) liquidate their human-intelligence sources right under the Reagan administration's nose. The usual pleasures of a period drama are infused with an occasionally melancholic sort of dramatic irony: the agents struggle to meet their superiors' demands in the interests of a regime that the audience knows already has one foot in the dustbin of history.

I've written about The Americans here in the past and will try to curb my fannish enthusiasm except to make a point. The show's whole premise turns on the risk of exposure; the viewer develops a vicarious feel for the state of remaining constantly on guard against leaving tracks, and for speed and thoroughness in erasing them when you do. But rarely do the spies have to worry about being watched or recorded on a security camera. Video surveillance represents so negligible and manageable a risk as to seem odd, not to say careless, to the 21st-century viewer, for whom it is as much a fact of urban life as the danger of being run over by a driver checking his e-mail. 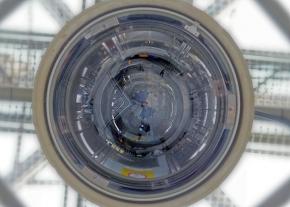 While the options for storing, searching and retrieving visual data were limited, closed-circuit video systems tended to be larger and more blatant in 1984. (The year, I mean, not the book--although, on reflection, that too.) But the ubiquity of monitoring devices now is not just a matter of superior engineering. It comes as part of the most recent phase of a process Joshua Reeves studies in Citizen Spies: The Long Rise of America's Surveillance Society, published by NYU Press. (Reeves is an assistant professor of new media and speech communications at Oregon State University.)

BY "CITIZEN spies," the author does not mean anyone engaged in espionage but rather people who, upon noticing ("spying") criminal or otherwise suspicious activity, convey that information to the proper authorities. The latter are presumably legitimate, powerful and competent to respond appropriately. To put it another way, Reeves has in mind the kind of citizen who takes the widespread slogan "If you see something, say something" very much to heart. The good 21st-century citizen may even be defined as a "seeing/saying subject," to adopt the author's preferred expression.

He very quickly drives it into the ground, but it does imply an interesting conceptual prehistory. In the days before the rise of the modern police force in the West (about 200 or 300 years ago, depending on the country), enforcement of the law was the citizens' duty. They faced the task not just of identifying lawbreakers but of apprehending them, as well--rallying a crowd to find and corner a thief, for example. To ensure that citizens did their duty, those atop the social hierarchy imposed sizable financial burdens on municipalities where law and order was breaking down. Periodic service as a watchman was also mandatory. Reeves quotes a colonial commander in New York in 1776 proclaiming that "any who refuse to take Part in preserving the City will be judged unworthy to inhabit it."

"See something, say something"--or move to New Jersey, I guess. Anyway, this early mode of community self-policing was the source of the expression "hue and cry"--in which "hue" meant "horn," the instrument watchmen used to communicate. "Patterns of repetition, tone and emphasis allowed patrols in disparate communities to announce a criminal's presence," Reeves says, "and direct the dispersal of a number of civilian patrols." Later, printed "hue and cry" bulletins performed a similar function in circulating information about wanted criminals over much wider areas.

So conditions emerged in which law enforcement could be practiced as a regular, organized activity in which specialized bodies of armed men were part of a social division of labor in tandem with courts and prisons. In principle, at least, that would be more efficient and perhaps also fairer than the earlier ad hoc practice of rounding up a crowd prepared to deal out rough justice on the spot.

At the same time, having a police force separate from the rest of the population imposed its own problems--to which technology at times seemed to provide answers before opening up new difficulties. Reeves' chapters on the integration of the telephone into police practice are especially interesting. The public telephone seemed like a promising way to multiply the impact of the force by directing cops quickly and precisely to where they were needed. Doing more with less sounded good in the 19th century, too.

But the police did not trust the public's ability to use the (expensive) new technology wisely or responsibly. The phones could be accessed only by using keys, a small number of which were distributed to worthy citizens and marked to indicate which key belonged to which recipient. The phone line went directly to police headquarters; furthermore, once the phone was opened, the key could only be removed by an officer. Some models had buttons for what you were calling to report--6 for murder, for example, or 11 for fire. Sexual assault is noticeably absent from the dial appearing in one of the illustrations.

Developments tracked in later chapters (such as neighborhood watch programs and junior police clubs for children) follow a similar course of encouraging citizen participation in the effort to monitor and report on others--while at the same time trying to limit and channel that involvement. Reeves's larger point is that the array of surveillance and control systems established in American society since the September 11 attacks is largely dependent on habits of complicity, or at least of acquiescence, that have been a very long time in forming.

And that seems true enough. But it may underestimate the difficulty now of imagining that things were different even before the turn of this century. That walking down a city street and thinking that any number of cameras might well be recording you would have seemed a bit deviant, if not pathological, once. Now it's normal and, more strangely still, not even much of a concern.