Wrapped up in red, white and blue

Nationalism is a cornerstone of the Trump administration's right-wing agenda--but the left has to be prepared to confront it from any source, writes Alan Maass.

ADD ANOTHER to the Funny-If-It-Wasn't-So-Frightening file: Donald Trump wants to throw himself a star-spangled parade, with tanks and missiles and marching ranks of uniformed soldiers as props.

Sure, the stated justification for Trump's reported request to the Pentagon to hold a military parade is to honor "America's great service members who risk their lives every day to keep our country safe," White House Press Secretary Sarah Huckabee Sanders insisted.

But everyone knows that the TV cameras will end up back on the Flag-Waver-in-Chief--whose devotion to the military today didn't stop him from, like other members of his class, skipping out of the draft during the Vietnam War with a medical deferment...for bone spurs in his heels.

There's plenty more eye-rolling hypocrisy where that came from. For example, Vice President Mike Pence, while traveling to South Korea for the Olympics, defended his boss's parade scheme as a chance to "celebrate the men and women of the Armed Forces"--seconds before denouncing North Korea's recent parade of military hardware as a "provocation." 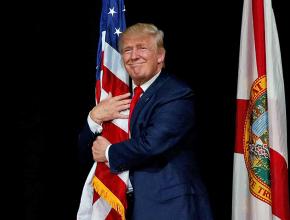 But Trump's desire to glorify the U.S. military and its unparalleled capacity to cause death and destruction becomes more chilling when you remember another request that the White House reportedly made of the Pentagon earlier this year: to come up with more options for a pre-emptive strike against North Korea.

Advocates for a U.S. war on North Korea are getting more vocal and direct--like veteran reactionary Edward Luttwak, whose recent article in Foreign Affairs was bluntly titled "It's time to bomb North Korea."

Meanwhile, the administration is celebrating a budget bill that boosts already inflated spending on the military by 15.5 percent in just one year--the biggest single-year windfall since the Bush administration pushed through a record-setting budget in the aftermath of the September 11 attacks and the start of the war on Afghanistan.

What better advertisement for the military's swollen budget than tanks rolling down Pennsylvania Avenue?

U.S. WARS have always come wrapped up in red, white and blue, but nationalism is a thread connecting every part of the Trump administration's reactionary agenda.

Immigration is an example so obvious that it doesn't need much explanation. Trump wants to build a "great" wall on the border and sharply reduce legal immigration to defend "American" jobs and living conditions, he claims.

Actually, the system presided over by Republican and Democratic administrations alike depends on strictly controlling, not eliminating, the flow of labor across U.S. borders--because this allows U.S. corporations to pit workers against one another in order to drive down the very living conditions Trump claims he wants to defend.

A look back at U.S. history shows that one group after another was encouraged to move to the U.S. under conditions of illegality, and set up to be the scapegoat at the bottom of the heap. Upton Sinclair's famous novel The Jungle, about the slaughterhouses of Chicago and the brutal conditions suffered by a succession of immigrant groups around the turn of the 20th century, captures perfectly what drove the system:

Here was a population, low-class and mostly foreign, hanging always on the verge of starvation, and dependent for its opportunities of life upon the whim of men every bit as brutal and unscrupulous as the old-time slave drivers; under such circumstances, immorality was exactly as inevitable, and as prevalent, as it was under the system of chattel slavery.

It's impossible to read these words about Lithuanian meatpackers in Chicago and not think of the conditions endured by immigrants from Mexico and Central America today.

They are used twice over--as workers who can be super-exploited because they have no legal rights and as a group that can be pitted against other workers by appealing to the illusion that native-born workers are somehow different than their fellow workers because they were born on the other side of an arbitrary national border.

You can see the dual purposes of nationalism very clearly in these examples.

The appeal to put America First is a justification, first of all, for the enormous sums spent on "defending" the border against the threat of "uncontrolled migration" and on building up a military that can project the interests of U.S. imperialism around the globe--and for the repression of dissent against any of these ruling-class priorities, to boot.

But it also provides a mythology that claims the fates of rulers and ruled are bound together.

You don't have to be a revolutionary Marxist to question whether the U.S. state exists to "allow individuals to flourish"--because so many people know from their own personal experience that they aren't.

THE TRUMP administration does represent something of a break from the dogmas that have dominated the U.S. ruling class for several decades now--in that it promotes economic nationalist measures that conflict in some cases with the free trade policies of the past.

The administration's practical achievements have been more uneven than many expected immediately following the election. But there has been a shift, starting with the scrapping of the Trans-Pacific Partnership agreement intended to tie the U.S. and Asian nations together in an economic bloc against China.

Last month, federal officials announced new tariffs on imports of solar panels made by Chinese companies, which are artificially cheap due to government subsidies, according to the U.S. side of the story. The new tariffs are a showdown, particularly over the power of the World Trade Organization, which the U.S. itself has traditionally dominated, to punish so-called protectionist trade measures judged to be unfair.

But even this clear case of the Trump administration attempting to hamstring Chinese exporters highlights the contradictions of economic nationalism. As the New York Times pointed out, the "American" company that lobbied for the tariffs after claiming it was forced into bankruptcy because of cheap imports is itself Chinese-owned.

According to the trade journal E&E News, Suniva Inc. "has often waved the flag, claiming that its products are 80 percent American-made," but the "company's bankruptcy filing reveals that the overwhelming majority of Suniva's commercial debt is to a web of international suppliers, including a silicon maker from Germany, wafer and module companies from South Korea, chemical and metals firms from China, and a panel assembler in Canada."

So the Trump administration's economic nationalism is not so very far from the general rule for capitalists and their corporations: They support free trade or protectionist policies depending on what best promotes their interests in competition with other capitalists, wherever they are based.

THIS LAST point underlines why it is so important for the left to challenge nationalism when it comes from the labor movement and its own ranks.

For example, the AFL-CIO offered qualified praise for the Trump administration last fall in its attempts to renegotiate the North American Free Trade Agreement.

"[U.S. Trade Representative] Robert Lighthizer has engaged with labor and listened to our ideas," AFL-CIO President Richard Trumka said in a statement. "While we certainly don't agree on everything, we exchange views and seek common ground that will benefit all North American workers."

It's hard to believe Trumka actually thinks that Trump or Lighthizer genuinely cares about benefiting "all North American workers," or even U.S. workers. But organized labor has traditionally been committed to a left variant of nationalism that prioritizes the interests of U.S. workers over those in other countries--so the likes of Trumka side with the White House when it advances protectionist measures.

This is doubly harmful. It accepts and strengthens the nationalist lie that U.S. corporations and U.S. workers are in it together against foreign competition, even when it completely obvious that Corporate America is responsible for cutting "American" jobs and pushing down wages and living standards.

And it makes enemies of fellow workers in other countries, rather than building solidarity across borders to confront the enemy that exploits and oppresses workers of every country: the capitalists, whatever nation may be listed on their passports.

As Pranav Jani wrote for SocialistWorker.org after the Trump administration abandoned the Trans-Pacific Partnership:

Trump's claim is that he will keep jobs here for U.S. workers. But he also opposes fights for wage increases and for unionization, and he proposes to detain and deport undocumented workers.

How is that a victory for workers in the U.S.? Are the jobs resulting from Trump's policies going to be available to all? Will they have decent wages and benefits? Are they going to come with health benefits, with access to reproductive rights?...

Trump's aim, in fact, is to strengthen the hand of the U.S. capitalist class as a whole. Stay at home and be rewarded with a sweet deal for profits--that's his message to U.S. capitalists...

So the left needs to be wary of Trump's economic policies that are sold as a defense of U.S. jobs, because they are part of a larger agenda--one that Barack Obama and Bill Clinton carried out through different means and with different rhetoric to a different domestic audience.