Trump and the crisis that caused him

Dorian B. reviews a collection of essays by socialist authors and journalists, many of them SW contributors, that asks tough questions about Trumpism--and answers them.

WITH DONALD TRUMP in the White House, it feels like you never know what's coming next.

On one day, he's giving orders to ban Muslims from the country; the next, he's threatening to "totally destroy" North Korea; and after that, he's hurling racial insults (and paper towels) at hurricane victims in Puerto Rico. When he's not golfing at Mar-a-Lago, the 45th president of the United States is a real loose cannon.

That's why it's essential to take several big steps back once in a while and ask yourself who this vile man really is, what he represents, and how he found himself at the helm of the most powerful country in the world.

Those looking for a deeper analysis of Trump's rise to the presidency--what it means, how it happened and what comes next--won't want to miss Haymarket Books' new title, U.S. Politics in an Age of Uncertainty: Essays on a New Reality.

It's a collection of commentaries by 11 leading socialist thinkers--many of them regular contributors to SocialistWorker.org, among other publications--on the meaning of the Trump phenomenon. It asks tough questions, and it's a challenging but rewarding read. 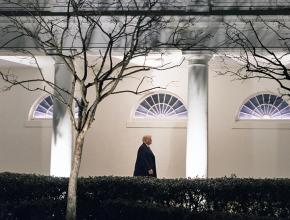 THE AUTHORS take a refreshing approach to the subject of U.S. politics in the Trump era: They treat it as any scientist would their object of study, as something to be explained and grappled with, not sensationalized or oversimplified.

We're asked to consider Trump and Trumpism as an outcome--an effect that, like all other things in this world, must have had a cause or causes. Just as a powerful storm emerges out of weather patterns which came before it, so Trump's rise must be explained by the conditions that preceded him.

And those conditions are the Obama era. The years 2008 to 2016 contain the most recent clues to Trump's success.

Lance Selfa, the editor of this collection, writes in his contribution "From Hope to Despair: How the Obama Years Gave Us Trump" that the first symptoms of the Trump infection showed up in the 2010 midterm elections.

In 2008, Obama rode a wave of popular enthusiasm into the White House. "Two years later," Selfa writes, "the formerly discredited and out-of-touch Republican Party scored a historic landslide in the 2010 midterm election. In the largest congressional midterm victory since 1938, the Republicans captured sixty-three seats, ending the four-year Democratic majority in the House of Representatives."

How did this happen? When Obama took office two years before, with the Democrats controlling both houses of Congress, his administration quickly proceeded to appoint Bush-era officials to top positions in the Treasury and Pentagon.

The fiscal stimulus law passed weeks after Obama's inauguration, while significant, excluded jobs programs to ease rising unemployment. The administration imposed sweeping concessions on unionized workers through the auto industry bailout, even while corporate executives continued to be rewarded with lavish payoffs.

As the business elite found a willing partner in the new White House, poll after poll showed that Americans had begun to associate Obama and the Democratic Party with big finance.

INSTEAD OF urgent relief and uplift, most people in Obama's America were confronted with stagnating or worsening conditions at work, growing debts and a rising cost of living, alongside ongoing injustices such as police brutality and mass deportations. The groundswell of hope and optimism gave way to painful disillusionment and demoralization, which paved the way for the Trump disaster.

But the road to Trump was long and winding, extending back over the reigns of two Bushes, Bill Clinton, Ronald Reagan and Jimmy Carter--through a 40-year ruling class offensive to constrict the conditions of working class existence, which came to be known by the name of "neoliberalism."

Sharon Smith's contribution to U.S. Politics, "Chickens Coming Home to Roost for the Democratic Party?" lays bare the devastation. The "wreckage of neoliberalism," as Smith calls it, is strewn everywhere. Organized labor was smashed up, declining from 20.1 percent of the workforce in 1983 to 10.7 percent in 2016, and a frightening 6.3 percent in the private sector.

While CEOs saw their compensation double, triple and quadruple--and then quintuple, sextuple, septuple, octuple...--salaries for working-class wage-earners either stagnated or shrank.

"Inflation-adjusted pay for manufacturing jobs fell from $33,600 in 1990 to $28,000 in 2013," Smith writes, and "average real hourly wages of production and nonsupervisory workers fell by 15 percent between 1973 and the mid-1990s." All this at a time when the state provided less and less in services, leaving households to do more and more just to survive.

The stark fact is that the U.S. once had the highest-paid working class in the world, but today, even though they live in the wealthiest country on earth, U.S. workers are the poorest among all 35 member states of the Organization of Economic Co-operation and Development (OECD), which represents the world's leading economies.

This ruthless assault on working class-life explains why the hopes in Obama to produce something different were so great--and why the hurt of the betrayal when change didn't come ran so deep.

FROM THIS experience, many drew the conclusion that Trump won the election because disillusioned, angry white workers voted for him in protest at the establishment.

Certainly a section of workers did go over from voting Obama to casting a ballot for Trump. But this underestimates the degree of popular demoralization. By any number of measures, more working-class people who didn't vote for Clinton as a lesser evil simply abstained from voting altogether.

Several essays in U.S. Politics--notably Kim Moody's "Who Put Donald Trump in the White House?" and Mike Davis' "The Great God Trump and the White Working Class--drive this point home.

Moody uses exit poll data to show that people from households making more than $100,000 a year (just over a quarter of the population), comprised 34 percent of Clinton voters and 35 percent of Trump voters. "[U]pper-income groups were overrepresented in the electorate as a whole, and both candidates drew a disproportionate part of their vote from the well-to-do," Moody writes.

Voter turnout overall was roughly the same in 2016 as in 2012, when Obama easily beat Republican Mitt Romney. Crucially, though, while the ballots cast increased in the East and West Coast states, it decreased in the Midwest and the South, including the "Rust Belt" former industrial states that gave Trump his victory in the Electoral College, despite losing the popular vote by nearly 3 million.

In his essay, Mike Davis brings our attention to a data table on voter participation in nine Midwestern states (including Pennsylvania) where turnout in absolute terms fell from 33.2 million in 2012 to 29.9 million in 2016, despite an increase in the number of eligible voters.

This, Davis argues, illustrates a pattern of working class despair, which was clearest in a state like Ohio, where the effects of the 2008 economic crisis were severe. As Moody writes:

While a minority of mostly white working-class people did vote for Trump, the overall picture in the Midwestern and Southern states was one of a decline in working-class turnout and a collapse in votes for the Democratic Party among many of its core constituencies.

The most commonly repeated fact cited as evidence of Trump's working-class support is his success among white voters without a college degree. But Moody shows how flimsy this evidence is.

He points to data from the Bureau of Labor Statistics which reveal that only half of the 175 million white adults without a college degree in the U.S. are in fact workers--the other half belong to households of small business owners, managers, supervisors and police officers.

IF THERE is a single most important insight to be had from these detailed analyses, it's this: decades of attacks on working class living standards have shut working people out of the political process and laid the basis for a demagogue like Trump to win an election with the support of a minority of voters that is disproportionately middle class and higher-income.

As Keeanga-Yamahtta Taylor puts it in her essay "Black Politics in the Trump Era," "There are 238 million eligible voters in the United States, and of that number, only 60 million voted for Trump--and, even among that number, 17 percent of people who voted for him said he was unfit to be president." The tyrant on 1600 Pennsylvania Avenue has no popular mandate at all.

With or without a mandate, however, Trump is the president. And the increase in the authority of the executive branch of government under the Bush and Obama administrations has given him far-reaching powers to enact his agenda, even without the collaboration of a Republican-dominated Congress.

Taylor argues that the threat posed by the racist attacks from this White House is high. Although Steve Bannon, the toast of the alt-right, was ousted from his position as a top Trump strategist, other friends of the far-right remain in positions of real influence.

Stephen Miller, for example, is one of the main architects of the Muslim travel ban and Trump's senior advisor for policy. While an undergraduate at Duke University, Miller was mentored by then-graduate student Richard Spencer, who is today a leading voice of white nationalism.

For those seeking to understand how different forms of oppression have been impacted by Trump's victory, U.S. Politics features gripping articles by activists and scholars Deepa Kumar on Islamophobia, Justin Akers Chacón on immigration, and Elizabeth Schulte on women's rights, to which I can't do justice here.

What they all demonstrate is that despite Trump's deep unpopularity, the president has the means at his disposal to carry out devastating attacks on oppressed populations--and that we are going to have to resist tenaciously in order to defend our side.

WHILE ALL of the book's contributors share a common framework and shared collaboration and goals, there are also differences in interpretation that activists on the left should discuss.

The most significant, to my mind, concerns the relationship between Trump and the U.S. ruling class. Longtime socialist activist and author Charlie Post writes in his essay "We Got Trumped!" that Trump's agenda represents a rebellion by the Republican Party's middle class base against its elite party bosses and funders.

He argues that while Trump and the Republican establishment can unite around austerity and tax cuts for the rich, Trump's hardline nationalism--and, in particular, his commitment to a protectionist, isolationist foreign policy--is anathema to the Republican leadership, which will try to block him at every turn.

Scottish socialist and author Neil Davidson, on the other hand, suggests that there's more room for synergy between Trump's economic nationalism and the Republican old guard. In his chapter "Choosing or Refusing to Take Sides in an Era of Right-Wing Populism," Davidson lays out his view that the global capitalist system is facing a deep crisis and may not be able to reproduce itself over the medium-to-long term in its current form.

While he also highlights tensions with the establishment, Davidson points to the possibility that Trump and others like him may lead the way toward an economic nationalist model that could attract increasing sections of the elite as they face intractable problems in today's globalized order.

These are big questions that socialists will have to grapple with in the years to come.

Nevertheless, the idea that pervades all of the essays in U.S. Politics is that Trump, bizarre and stupid though he may be, is not an unexplainable exception.

What made Trump possible is the oppression and disenfranchisement of the working class majority, which left most people without a voice in the last election. While the consequences of this are disastrous, we should remember that the working class can find that voice again--and sweep Trump and the whole tired establishment out of power.