Taking on the bigots outside our clinics

Isabella Hord, Erica West and Ann Coleman report on a recent Bay Area clinic defense, and make the case for a new fight to oppose the right’s attacks on abortion.

ON SEPTEMBER 26, students from the University of California (UC) Berkeley and Mills College mobilized for a clinic defense of a Planned Parenthood clinic in Walnut Creek, California.

The day marked the first of the anti-choice “40 Days for Life” — a biannual event in which anti-choice groups and activists harass patients who use Planned Parenthood and other reproductive health services across the country.

When pro-choice activists arrived at 5 p.m., there were approximately six, mostly older and male, anti-abortion bigots in front of the clinic. They held rosaries and handmade signs with slogans including “Pray to end abortion” and “Please let me live, I’m a human being” with a picture of a fetus in the womb. 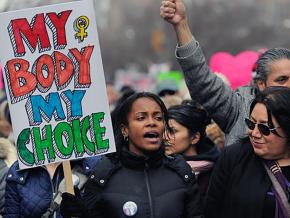 Perhaps the most disturbing sign read “We’re here for you and your baby.” But so called “pro-lifers” couldn’t care less about the lives and well-being of women and people in need of abortion — as evidenced by the right’s overwhelming lack of support for social programs and services. Outside the clinic, the anti-choicers frequently prayed — and it seemed as though they had been caught off guard by the pro-choice counterprotest.

The pro-choice protesters received a positive response from the clinic’s security team. The head of security and facilities for Northern California Planned Parenthood let activists know that they were glad people were there to stand up to the bigots, who have apparently been coming to the clinic every day for quite some time.

The security official also said that the start of the “40 Days for Life” event has meant ramped up anti-choice efforts, and that seven clinics in the region had been targeted by abortion opponents that day. It hasn’t always been the case that Planned Parenthood has supported clinic defenses, so the pro-choice protesters were pleasantly surprised to receive their support.

By the time a second group of pro-choice activists arrived, the pro-choice side was almost two dozen people strong. The multiracial crowd included a diverse range of ages and genders and was more vocal that the anti-choice group. When the bigots finally left about two hours, the pro-choice protesters sang them a parting song before beginning chants.

Because the clinic is located between the highway and the local BART station, there wasn’t much foot traffic, but drivers that passed by responded with an overwhelming number of supportive honks and thumbs up. Some drivers even held up ready-made signs to their windows with slogans like “My body, my choice.” The clinic has apparently been a target of the anti-choice bigots, who have come every day for quite some time. The presence of these anti-choicers is well-known in the community and to visible to those who regularly drive by the clinic — and regular commuters driving past had already found ways to communicate to the anti-abortion protesters that they are unwelcome.

CLINIC DEFENSES are conducted with the goal of supporting patients and their right to abortions and health care. As one UC Berkeley student who joined the clinic defense said, “The energy on our side was positive and supportive. It felt so good when the anti-choice people left. We had the numbers and we convinced them to leave because of it.”

Her experience speaks to the efficacy of directly confronting the right when they target clinics. Less confrontational strategies, such as ordering court injunctions, attempting to pass legislation to protect clinics or even just “ignoring” anti-choice forces haven't slowed the attacks on our clinics or our right to choose abortion.

In the Bay Area, when 40 Days for Life tried to come to a San Francisco clinic in 2017, the then-newly formed Bay Area for Reproductive Justice coalition mobilized to counter them, and afterward they didn’t come back. That experience is a lesson to not sit back and ignore bigotry when it comes knocking on our clinics’ doors. In the current political climate, the far right is on the offensive against women’s rights. If we don’t mobilize and fight back, they may succeed in forcing women back into the back alleys.

With an anti-abortion bigot newly confirmed to the Supreme Court, clinic defenses and other direct actions are critical. Currently, more than 90 percent of U.S. counties lack even a single abortion provider, and some states are down to a single clinic. Most clinics aren’t open nights or weekends, meaning that working people in need of abortion have very few opportunities to access them — especially with mandatory waiting periods and ultrasounds and other burdens in place in many states.

“I went to the clinic defense not just out of solidarity but to also express my disdain for the continued marginalization of people who use reproductive health services,” explained one male clinic defender. “I wanted to add to the voice, to make it a roar, that we as a people, as a world, should stand for full accessibility to abortion and beyond out of necessity and justice.”

With the right to abortion hanging by a thread, our side needs to take the offensive if we truly want to protect clinics and access to abortion.