Five things the shutdown shows us about 2019

What does the next year hold for the left? Socialist Worker looks into our crystal ball — and at what the federal government shutdown and the incoming Congress tell us.

THE ERA of divided government began with the continuation of a ridiculous and destructive government shutdown caused by a president who seemingly cares only about impressing a hateful right wing minority obsessed with the symbolism of building a literal wall on the southern border to keep out brown-skinned immigrants.

To this point, Democrats have been flexing their new leverage as holders of the House majority by refusing to agree to Trump’s wall. It feels a little better that at least one part of one branch of government is controlled by someone other than the gutless Republicans who have catered to Trump’s every destructive whim.

But what hasn’t changed is that, with the exception of a few left-wing Democrats, the Democratic Party as a whole continues to stand for nothing beyond opposing Trump — certainly not for the refugee families in Tijuana who were teargassed on New Year’s Day as they approached a border wall that very much already exists. 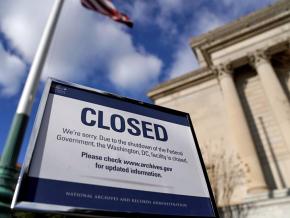 Regardless of who ends up blinking first in this latest Trumpian theater of the absurd, the shutdown has revealed some of the key political dynamics that socialists can expect over the coming two years.

Number One: Trump will be even more off the rails

It can’t be stated often enough: The most powerful office in the world is occupied by a myopic egomaniac who wouldn’t be trusted by anyone who knows him to take care of a pet or a houseplant.

Trump led an erratic and dysfunctional government when his party controlled all parts of the federal government. When the Democrats won control of the House in the midterm elections, Trump dialed his instability up to 11.

Mattis and Kelly gone; tweets announcing a full withdrawal from Syria; threats to dismiss the Federal Reserve chair — all these moves will rattle the billionaires and power brokers who either supported or at least tolerated Trump, even when he pandered to Charlottesville Nazis and built border concentration camps for refugee children.

Now, House Democrats have the power to vote down legislation and launch long-delayed investigations into the White House’s tangled web of corruption. And with the Mueller investigation moving closer to Trump and his inner circle, the Republican rats have to start thinking about when to jump ship.

But Trump governs not by logic but by crisis. The shutdown shows that the more obstacles he faces in the coming months — whether it be from Mueller, Democratic hearings or a sinking economy — the more destructive he is going to be.

Number Two: It’s the people who end up paying for Trump’s “populist” stunts

Some 800,000 federal workers have been impacted by the shutdown — half of them “nonessential” workers furloughed for the duration and half of them forced to work without pay.

In other words, the president who boasted (falsely) about saving 1,000 jobs at an Indiana manufacturing plant on the campaign trail is now boasting that he’s proud to steal paychecks from 800 times that number of people, in the name of his racist campaign against migrants.

Then there’s the impact on the services those workers provide, and not just at national parks and museums, as the media like to point out.

Case in point: food and drug inspections. That’s right, just weeks after a horrific outbreak of E. Coli in lettuce — capping a year considered the worst for food safety in recent memory — we’re all now in even greater danger of another deadly outbreak, all because Trump claims he’s keeping us safe from mythical diseases carried by immigrants.

But the most outrageous impact of the shutdown is probably the cutoff of funds for Indigenous nations whose treaties called for federal money for education, health care and other services, in exchange for vast territorial concessions.

“We prepaid [for the services] with millions of acres of land,” said Chippewa leader Aaron Payment told the New York Times. “We don’t have the right to take back that land, so we expect the federal government to fulfill its treaty and trust responsibility.”

Among the many services considered “nonessential” by the government is snow removal in rural areas. As a result, Navajo Nation president Russell Begaye told the Times that many people on the reservation are trapped in their homes, unable to drive the dozens of miles to the nearest grocery store or pharmacy.

Number Three: The Democrats remain the party of the status quo (and that’s a bad place to be heading towards a recession)

Last year, polls showed that two-thirds of Americans oppose Trump’s family separation policy at the border, and a full 75 percent think immigration is “a good thing” for the country — the highest number since 2001.

But Democrats aren’t using this national spotlight on immigration policy to do anything other than scold Trump for shutting down the government and continuing with the status quo.

House Democrats led by new Speaker Nancy Pelosi want to position themselves as the party trying first and foremost to end the shutdown. But that doesn’t mean they couldn’t also use this moment of national crisis to expose ICE raids, for-profit prisons, family separation and the other horrors of U.S. immigration policy.

Instead here’s the new head of the House Democratic Caucus, Rep. Hakeem Jeffries: “We do have a broken immigration system that needs to be fixed in a sustainable and bipartisan way. However, it’s impossible to have a mature conversation about comprehensive immigration reform in the midst of a reckless Trump shutdown sparked by his desire to build a medieval border wall.”

By countering Trump with proposals to maintain “border security” funding at current levels, Pelosi engaged in the classic Democratic strategy of starting negotiations with a concession that can only lead to further retreats toward the Republicans’ maximalist position.

Her proposal also captures exactly what her party stands for: continuing the status quo, which in this case includes children dying in detention centers and being teargassed by Border Patrol thugs.

But Pelosi didn’t just “play it safe” when it comes to border politics. She also included in her proposal to reopen the government a “pay-as-you-go” provision that requires new spending to be offset with equivalent savings. This austerity measure beloved of conservatives would make it virtually impossible to pass ambitious reforms like Medicare for All or Alexandria Ocasio-Cortez’s proposal for Green New Deal.

Pelosi’s stance during the shutdown follows the conservative agenda that she and Senate Minority Leader Chuck Schumer have already laid out for the coming two years.

Though rejection by the Senate or a Trump veto is probably assured, the Democrats could push measures that lay out an agenda of bold popular redistributive reforms, like taxing the rich to pay for universal medical care and college tuition.

Instead, Democrats plan to think small — for example, proposals to tinker with the Affordable Care Act or enact campaign finance reform measures that are unobjectionable to their billionaire funders.

Party leaders are hoping they can reap the benefits of the “energy” brought in by left-wing newcomers like Ocasio-Cortez — even as they bury her proposal in a neutered climate change committee that won’t get behind the New Green Deal.

Number Four: Immigration politics needs a “Medicare for All”

On New Year’s Day, White House Press Secretary Sarah Huckabee Sanders said that Trump would reject Pelosi’s proposal to end the shutdown because it “fails to secure the border and puts the needs of other countries above the needs of our own citizens.”

As always, jingoistic nationalism is the last refuge of scoundrels.

Trump’s wall may not be popular, but this underlying “America First” argument has a broader appeal — made relevant by the fact that neither party has lifted a finger in many decades to help the majority on the wrong end of increasing inequality.

That’s why immigrant-bashing is Trump’s go-to issue when he needs to whip up his base — and it’s why the longer Democrats counter it with nothing more than procedural scolding, the more of a chance it has to take root.

The emergence of a new left both inside and outside the Democratic Party has been marked by demands like Medicare for All, free college and now the Green New Deal that have articulated the politics of working class solidarity.

The emergence of the demand to #AbolishICE last summer was an important step toward breaking the left from the exploitative corporate scheme of “comprehensive immigration reform.” But we have yet develop a concrete set of demands that tie the fight against migrant oppression to labor demands that will benefit workers, regardless of legal status and nationality.

With Republican Sen. Lindsay Graham floating ideas for ending the standoff with an even weaker version of comprehensive immigration reform, this is an urgent task.

Number Five: The key question for the left will be unity vs. independence

It’s a trend that’s been developing for years, but it accelerated as Trump brought the Republican Party under the control of its extreme right wing, boosting the longtime Democratic strategy of becoming the party of choice for U.S. capital and well-off suburban voters.

Schumer was widely mocked for his 2016 prediction that Democrats would pick up two suburban moderate votes for every blue-collar worker they lost, but in the midterms, the strategy worked pretty well. The House majority contains democratic socialists like Ocasio-Cortez and Rashida Tlaib, but also a lot of incoming moderates.

But this isn’t just a question of math. For decades, the project of the Democratic Party has been to subordinate its left flank behind a centrist project. Schumer’s formula isn’t mathematical, but political: There are far more workers than well-heeled suburbanites, but the latter correspond more to the interests of capital that the Democrats are actually interested in serving.

One key debate in the coming period will be whether left should work toward independence from the Democratic Party — or make a priority out of “unity” with the centrists to keep right-wing nationalists out of power.

The question won’t be mainly about elections in the short term, but about demands like Medicare for All and the Green New Deal — and it’s important for everyone to understand that fear of independence is behind the Democratic complaints that they are “too radical” or jeopardize pushing the right wing out of power.

If movements reject the Democrats’ limitations, these political battles can contribute to establishing the left practically in organization and in struggle on the scale that the new socialist movement has projected itself ideologically.

Some of the new left-wing Democrats in the House are off to a promising start, from the Green New Deal, to Rashida Tlaib’s rejection of the traditional Israel junket for new members of Congress, to the rejection by Ocasio-Cortez and others of Pelosi’s pay-as-you-go provision.

But just as it was telling that the challenge to Pelosi’s speakership came not from the party’s left wing, but from its right, it’s also telling how few Democrats joined the challenge to her austerity plan — much less did other things like encouraging federal workers to take job action against the shutdown or bringing delegations of Indigenous leaders to the Capitol to protest.

That’s a reflection of the pressure on party members to stay united in the shutdown fight. The shutdown will end eventually, but this Trump-created crisis and the standoff that ensued give us an early indication of how little the Democratic Party as a whole has changed.