Standing up to ICE’s campaign of fear

Oakland teacher Jessie Muldoon describes an ICE operation to strike fear into immigrant parents--and the rapid response to this intimidation.

AS A teacher in the Oakland Public School system, I was alarmed to receive an e-mail alert May 6 that Immigration and Customs Enforcement (ICE) vans were driving around and intimidating a largely Latino neighborhood in East Oakland.

On the heels of the May 1 immigrant rights rallies and a high-profile series of raids at the El Balazo Taqueria chain in the Bay Area, ICE vans were spotted in Oakland and Berkeley neighborhoods. In Oakland, the vans were at an intersection just blocks from Stonehurst Elementary School.

Their presence early in the day sparked concerns that ICE might detain or harass parents as they came to pick up their children from school. The alert that went out was followed by many more, all denouncing ICE and asking people to come out and volunteer to bring children home, should their parents fear being picked up.

To support parents and protest ICE's increase in raids and intimidation, about 50 people turned out that afternoon as school let out. The response was built quickly through immigrant rights Internet listserves, the Alameda Central Labor Council, May 1 demonstration organizers and word of mouth. 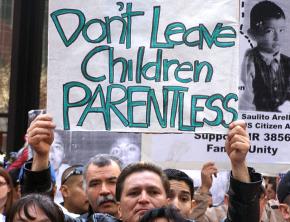 Oakland Mayor Ron Dellums, school board members and representatives from the Labor Council were all present at the school, and criticized ICE tactics of spreading fear through communities, particularly using their presence to intimidate children and families.

Oakland is a sanctuary city, and the school board, Oakland Education Association and members of the city government all oppose this intimidation. But the answers to the problem on offer are mixed.

For example, in addition to the turnout of activists and community supporters, additional police were deployed to make sure ICE was unable to come onto campus. But police brutality in Oakland is a reality, especially in poorer, communities of color. Just this April, 15-year-old José Luis Buenrostro-Gonzalez was gunned down in broad daylight by cops who had profiled him as a gang member.

What's more the police have collaborated with ICE--for example, helping to detain and deport day laborers who were looking for work at a Home Depot in Fremont.

The police cannot both facilitate raids and terrorize communities, and then be expected to protect those communities. Rather, activists, families and grassroots organizations have to work to make the city live up to its sanctuary city status, and build an effective and quick response to raids when they happen.

As the climate of fear and criminalization grows, the burden on activists to build even more organized and pro-active response has grown. But there have been some steps forward. In San Francisco, more than 250 people came out to a protest, organized on two days' notice, against the detentions and deportations of El Balazo workers. And there was the almost spontaneous response to ICE at the schools in Oakland.

Organizers have to keep working to develop strategies and plans to respond to anti-immigrant attacks as they happen, as well as to build campaigns for those already caught in the net of ICE.