UTLA member Randy Childs looks at the backdrop to the job action planned for later this week.

UNITED TEACHERS Los Angeles (UTLA) has called a one-hour strike for the morning of June 6 despite the efforts of the Los Angeles Unified School District (LAUSD) to stop the job action.

The June 6 action, a "late sign-in" in which UTLA members will rally outside of their schools instead of teaching for the first hour of the day, will be a protest against Gov. Arnold Schwarzenegger's proposal to slash billions of dollars from education, health care, welfare and other social services in the state budget. Schwarzenegger's budget will shortchange California's schools by about $4 billion, creating a $400 million budget deficit for LAUSD.

On May 27, LAUSD Superintendent David Brewer sent a recorded phone message to all 48,000 teachers, counselors and health care professionals represented by UTLA. In it, Brewer cynically attacked UTLA for "walking out on our students" and claimed that the June 6 job action would jeopardize student safety.

This from the same district officials who have been stonewalling for almost a year against UTLA's demands to improve language on school safety in our contract. 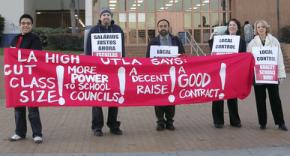 And while district officials apparently expect us to get the Terminator to back off on his budget cuts through moral suasion, they are not relying on moral suasion alone to "convince" UTLA not to strike. LAUSD is seeking a court injunction against UTLA officers and members to stop the June 6 job action.

Nevertheless, UTLA responded to Brewer's threats by sending a fax with the title "June 6 is on!" to union chapter chairs (the UTLA's equivalent of a union rep or shop steward) at every school.

UTLA announced the one-hour strike plan at a May 4 citywide meeting of 400 chapter chairs and activists. At the meeting, UTLA President A.J. Duffy acknowledged that the June 6 action would be illegal, adding, "I look forward to getting arrested!"

Also at the meeting was Maria Elena Durazo, executive secretary-treasurer of the Los Angeles County Federation of Labor. Durazo pledged the support of all the unions in LA, saying, "If you have to strike, we'll stand behind you!"

At the end of the meeting, chapter chairs and other UTLA activists organized a caravan down Sunset Boulevard, culminating in a rally and press conference just down the street from the governor's ritzy Brentwood mansion.

Most of the current UTLA leadership, including Duffy, are members of the United Action slate of union reformers and progressives. United Action recently won its second straight victory in UTLA elections, increasing its majorities among the union's seven full-time officers and on the 50-member Board of Directors.

The June 6 plan is a reflection both of United Action's platform of building a more aggressive fighting union and the pressure United Action leaders have been receiving from their own rank-and-file supporters concerned that UTLA was not moving fast enough to fight back against the cuts.