The real audience for the Obama campaign's "move to the center" isn't some group of swing voters, but the political, media and business establishment of the U.S.

THERE HAVE been many indicators--from huge corporate donations to huge voter turnouts--pointing toward a Democratic victory in November. Paradoxically, the most recent of these indicators is the Obama campaign's well-recognized shift to the "center"--that is, to the right.

Consider the landscape: an opponent running as heir to the most unpopular president in polling history, four out of five Americans telling pollsters the country is "on the wrong track," an economic recession, and the war in Iraq--championed by his opponent--that two-thirds of Americans oppose.

Only the most incompetent or resource-deprived political party could lose in that environment. In this context, the Democrats could be planning on sweeping the entire federal government and ushering in a slew of policies intended to bury the kind of politics that have dominated Washington for the past generation.

Instead, the Democrats' presumptive nominee is rapidly moving to embrace positions that reek of the Washington conventional wisdom he was supposed to be running against.

Immunity for the telecommunications companies from prosecution for participation in the Bush regime's domestic spying program? In the primary against Hillary Clinton, Obama pledged to filibuster legislation granting this. Presumptive nominee Obama now thinks telecom immunity is all right.

The death penalty for child rapists? Even Reagan-appointed Supreme Court Justice Anthony Kennedy couldn't stomach an expansion of capital punishment. But Obama, in a statement criticizing the court's decision to throw out a Louisiana law allowing this punishment, lined up with the court Neanderthals Antonin Scalia, Samuel Alito, John Roberts and Clarence Thomas.

Other moves to the right came in quick succession: outlining a plan for government funding to "faith-based" organizations that sounded little different from the Bush administration's current program; further hedging on his pledge to withdraw troops from Iraq; an interview with an evangelical publication in which he proposed limiting even further the right of women to obtain late-term abortions. 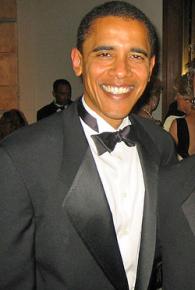 WHAT GIVES? No doubt, some of this is the standard "move to the center" for the general election. No doubt, were Clinton the nominee instead of Obama, we would be observing the same trimming of positions staked out in the primary season.

In reality, the usual reasons given for this--the need to address the whole country rather than Democratic partisans, the need to win independent and "swing" voters, etc.--don't seem to hold in 2008. Poll after poll shows that independent voters are aligned with Democrats on most issues. So the usual excuses for Obama's shift don't carry as much weight this year (if they ever did.)

But that whole discussion assumes the audience for these moves is the electorate. In fact, the real audience is the political, media and business establishment.

Obama isn't making these gestures because he's worried about adding a few thousand conservative voters in a swing state to his column. Instead, he's confident that he's going to win in November, and he is completing his exam for entrance to the pinnacle of the ruling class.

What all of this is really about--the reason why political elites like Nancy Soderberg are so eager to defend it--is because they really do believe that lawbreaking isn't wrong, that it doesn't deserve punishment, when engaged in by them rather than by commoners...

Just like the pardon of Nixon, the protection of Iran-contra criminals, and the commutation of Lewis Libby's sentence, this bill is yet another step in cementing a two-tiered system of justice in America, where our highest political officials and connected elite can break our laws with impunity.

Obama's embrace of the FISA bill isn't primarily a means to insulate himself from GOP attacks that he is "soft on terrorism"--which would come his way no matter how he voted on it. It is his signal to the political elite that it can disregard all of his "outsider" and "change" rhetoric because he intends to be a loyal servant of their interests.

And the Washington elite intends to make sure that Obama will do its bidding, if we can believe Newsweek editor Evan Thomas's (grandson of the perennial 20th century Socialist Party presidential candidate Norman Thomas) description of a soiree of Washington insiders he recently attended. Those assembled, including most of the Democrats and Obama supporters there, didn't believe Obama could "change Washington." Thomas continued:

The people holding such realist views might even want such changes, or most of them. But they know how Washington works: they might argue that Obama will need insiders if he really wants to change Washington (think of FDR's hiring stock speculator Joseph Kennedy to be the first head of the Securities and Exchange Commission). But at the same time, they have a strong appreciation for congressional gridlock and the countervailing powers of influence peddlers. They know that money--perfectly legal money--can trump idealistic campaign promises in a city thick with more than 35,000 lobbyists.

Thomas may be right about his Washington buddies, but is he correct in the underlying assumption that Obama is a crusading reformer who will have to contend with the forces of inertia that entrenched establishment represents?

Obama is already a member of one of the world's most exclusive clubs, the U.S. Senate. He has already collected hundreds of millions of dollars from Silicon Valley and Wall Street--despite his campaign's pretensions of being a grassroots effort. With the exception of his open somersault on the telecom immunity bill, his other "moves to the center" aren't really that far from the already very cautious and "bipartisan" positions that have been central to his campaign's message.

By way of defending Obama from Republican charges of "flip-flopping" on his pledge to withdraw troops from Iraq, Countdown with Keith Olbermann guest host Rachel Maddow on July 7 showed multiple video clips of Obama making the same hedges about assessing the "situation on the ground" during the primary campaign.

Although Maddow was trying to show Obama in a positive light--that Obama's recent statements on Iraq were just a restatement of his longstanding position--anyone paying attention could have concluded that Obama's "antiwar" position isn't so antiwar at all. But it is the "responsible" position that most of the Washington elite outside of the discredited Bush/neocon cabal endorses and is counting on Obama to implement.

ALL OF this may leave Obama's progressive supporters in the lurch. But for most of them, it doesn't leave them in a quandary. There is no doubt that they will continue to support Obama, as the Christian Science Monitor's Linda Feldmann explained:

The liberal blogosphere has lit up with outrage, bemoaning how the man who promised to move beyond politics as usual is, well, engaging in politics as usual. Some have vowed to refocus their energy and donations toward progressive candidates further down the ballot. But they will still vote for Obama, not Ralph Nader, the onetime darling of the left, and certainly not Senator McCain. Not voting is also off the table, given the stakes. And so, progressive activists say, Obama is likely to get away with his rightward shift.

One could ask why it's such a stretch for people truly committed to changing the system to conclude that they can't do anything more than vote for Obama. But this is one of the snares of the two-party system, as the socialist Hal Draper noted more than 40 years ago:

Every time the liberal labor left has made noises about its dissatisfaction with what Washington was trickling through, all the Democrats had to do was bring out the bogy of the Republican right.

The lib-labs would then swoon, crying "The fascists are coming!" and vote for the Lesser Evil...the Democrats have learned well that they have the lib-lab vote in their back pocket, and that therefore the forces to be appeased are those forces to the right.