Why I’m not voting for Barack Obama

Todd Chretien makes the case that remaining independent of the two mainstream parties is necessary for building an effective struggle.

The good news is that a majority of American voters are walking away from the John McCain-Sarah Palin freak show. Even David Letterman is grilling McCain.

In recent days, McCain even added the word "socialist" to Barack Obama's supposed list of sins. "You see, [Obama] believes in redistributing wealth, not in policies that help us all make more of it," said McCain. "At least in Europe, the socialist leaders who so admire my opponent are upfront about their objectives. They use real numbers and honest language. And we should demand equal candor from Senator Obama."

Just this once, I find myself wishing that something McCain says were true. Yet any serious look at Obama's record and platform signal that he intends to govern well within the mainstream of American politics. 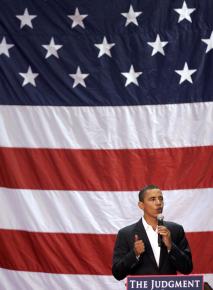 To begin with, there are his stated policies. He wants to keep at least 50,000 troops in Iraq to "fight terrorism" indefinitely, and he wants to send those who are withdrawn from Iraq to fight in Afghanistan. He agrees with John McCain that the size and budget of the American military must be increased, he stridently supports Israel's suppression of the Palestinian people, and he has said "me too" to reasserting American military might in Latin America, being especially hostile to Venezuelan president Hugo Chávez.

Obama would be the first to repudiate the idea that he is any sort of anti-militarist or anti-imperialist--and we should take him at his word.

Domestically, Obama recognizes, unlike McCain, that the era of reckless deregulation and neoliberal supremacy has run its course. His policies will aim to re-establish order between the "hostile band of brothers," as Marx called competing capitalists.

Yet no serious look at Obama's policies indicates a plan to fundamentally reshape the American class system. As Malcolm X once said, "You don't stick a knife in a man's back nine inches, and then pull it out six inches, and say you're making progress."

Obama may support some modest economic band-aids--extending unemployment benefits, for example. He'll most likely make some reasonable policy shifts, undoing the craziest of the Republican excesses--especially those that don't cost much. For instance, he'll appoint centrists to the Supreme Court if he gets the chance (although the justices most likely to retire are liberals or centrists anyway).

Obama will also end George Bush's ban on stem cell research, and he'll take modest steps to deal with global warming. He might even reduce the number of anti-immigrant raids by Immigration and Customs Enforcement (ICE).

But even if Obama has his way at every point, by the end of his first term in 2012, the schools will remain underfunded, the prisons overcrowded, and the gap between the rich and the working class more or less unchanged.

Compared to the last eight years of Bush, any change will be seen as a good thing. Obama's modest reforms will most likely earn him a honeymoon for a longer or shorter period of time. He also has the advantage that the Republican Party finds itself deeply divided, and those divisions will only increase if McCain loses badly.

But the modest changes Obama has promised fall far short of what is needed. Ongoing wars in Iraq and Afghanistan and economic crisis will form the backdrop to Obama's first term. This calls for far more radical measures than Obama has contemplated, even in the most generous reading of his intentions.

This reality requires a serious political discussion about how to build a working-class movement that can change the rules of the game--and it's in this context that the question of whether those who want to work for social change should vote for Obama must be discussed.

FIRST, SOME historical perspective is needed. If the opinion poll trends hold up, McCain's racist strategy will lose, and Obama will be elected the first African American president. In a nation built on slavery, this will be an historic accomplishment and a cause to celebrate for every genuine opponent of racism and bigotry of all kinds.

This point deserves emphasis. America's economic wealth was literally extracted from the backs and minds of more than 10 generations of Black slaves. This wealth wasn't incidental to the nation's fortunes. Without slavery, there would have been no riches for Northern merchants and bankers, and no boom in Northern industry. It took a ferocious Civil War to abolish slavery--a conflict that demonstrated the tenacity of the slave owner's defense of the system.

The freed slaves achieved a 10-year period of partial democracy and reform in the South during Reconstruction. Defended by heavily armed troops, they elected hundreds of African Americans to state legislatures and Congress.

This Southern revolution was drowned in blood, as the KKK lynched its way into power, leading to 80 years of apartheid-like legal segregation. The heroic and bloody struggles of the civil rights movement finally broke Jim Crow's back, paving the way to voting rights, affirmative action in education and jobs, the creation of a Black middle class, and the possibility of Barack Obama's campaign.

All this is often dismissed as ancient history. Yet it is worth remembering that when Barack Obama was born in 1961, millions of African Americans were still legally barred from voting in the South.

Even when the history is acknowledged, it is often asserted that the wrongs have been righted, and Black people should stop "complaining." As if the racist taunts shouted out at McCain rallies aren't buttressed by a powerful system of institutional racism which guarantees that African Americans disproportionately go to the poorest schools, suffer the highest unemployment rate and account for 50 percent of the nation's 2 million prisoners, although they constitute just 13 percent of the population.

Obama's election will raise the hopes of millions of Black workers across the country. Those who have suffered the brunt of American capitalism--and its most important tool, racism--will have a justifiable sense of pride at Obama's rise.

And for those who believe that the white working class can be won over to the fight against racism in the interest of class-based solidarity, Election Day will show that, even when offered the chance to vote along racial lines (first by Hillary Clinton and then by John McCain), tens of millions of white workers from all parts of the country will vote for Barack Obama instead.

None of this ends racism, but it certainly demonstrates the potential for interracial unity in the working class.

HISTORICALLY, THE American left has faced this dilemma: try to transform the Democratic Party or try to build an alternative to its left. During the last Great Depression, this choice was posed in particularly stark terms--and although history never repeats itself, there are some important lessons to be learned from what happened then.

The stock market crash in October 1929 led to bank failures, factory closures and skyrocketing unemployment, as well as a rising level of working-class anger--and, eventually, strikes, protests, union drives and all kinds of social protests.

The 1932 election of Franklin Delano Roosevelt has important parallels to Obama's campaign. He won in a landslide, replacing an unpopular and out-of-touch Republican administration, by promising a New Deal.

However, like Obama's call for "change," the content of that New Deal was meager when Roosevelt promised it on the campaign trail. It was mostly designed to shore up the banks and business, while offering small reforms for workers and the poor.

Yet the combination of anger and hope proved electric. Between 1934 and 1937, millions of workers went on strike and created the most powerful unions in U.S. history. In that struggle, the American Communist Party grew from 7,000 members in 1929 to 80,000 by 1938.

At first, it seemed like the working-class movement and Roosevelt were headed in the same direction. As workers got more radical and organized, Roosevelt was forced to deliver more reforms (Social Security, the National Labor Relations Act, the Works Progress Administration jobs program, unemployment insurance, etc.).

In fact, it seemed so obvious to many political radicals that Roosevelt and the working class were headed in the same direction that when the Communist Party dropped its opposition to the Democratic Party (on orders from Moscow) and became Roosevelt's biggest champion in 1935-36, very few complained.

But as the unions and Communist Party came to see defending Roosevelt from the Republicans as the central priority, they began to oppose the kinds of strikes and street actions necessary to continue the process of winning ever-more radical reforms for fear of "scaring the center."

Once this dynamic became dominant, the movement began to fall apart. The abandonment of this independence destroyed the possibilities of building an independent labor party, one that could stand for workers' rights, consistently fight racism and oppose U.S. wars abroad.

And when Roosevelt, the Democratic Party and big funders who really ran the party felt threatened by the demands of the unions, Roosevelt pre-emptively turned against the movement. On Memorial Day 1937--just months after Roosevelt won re-election with the overwhelming support of organized labor--police shot and killed 10 striking steelworkers in Chicago. It was then that FDR issued his infamous "a plague on both your houses" remark about the strike, which gave the green light to the bosses to use violence against the union movement.

By 1938, the New Deal economic policies had utterly failed to end the Depression. Instead, there was a dramatic worsening of the economy. At this point, Roosevelt turned towards building a massive war machine to fight the Second World War. This would include developing and dropping the atomic bomb in the interest of spreading the American empire to Europe, Africa, the Middle East and Asia.

The Democrats, having sidetracked the possibility of breaking the two-party cycle in the 1930s, then helped launch the anticommunist McCarthyite crusade, a war in Korea, the Cold War with the USSR and, eventually, the war in Vietnam.

NO ONE has a crystal ball, but it appears that global capitalism is entering a historic period of crisis. The question of how to use the opportunities this will open up so that we don't repeat the mistakes the left made in the 1930s will be crucial if we want a different outcome this time.

I believe that voting and giving political support to Barack Obama and the Democratic Party will weaken the fight for a fundamentally different kind of world, a socialist world.

Arguing against a vote for Obama and the Democrats is not political abstention, however. It is part of a larger strategy that argues positively to continue building a socialist movement, based on the independence of the working class from the two mainstream parties.

There are many dedicated activists who will disagree with this point of view. They look forward, above all, to seeing the Republicans defeated after eight long years of George Bush. But can they make a positive case that Obama and the Democrats will take us closer to breaking the domination of the rich over the working class in this country?

The fact that millions of American workers look set to elect the first Black president is a good barometer of what could be. But it's no substitute for systematic political debate and the patient building of social movements, socialist organization and practical action.