More than 400 people gathered at the University of California-Berkeley on November 23 to honor the life of Peter Miguel Camejo, a veteran of half a century of struggle, who passed away September 13.

The memorial service represented the many parts of Peter's life in the movement, from his leading role in the struggles of the 1960s to his years as a member of the Socialist Workers Party to his activities and campaigns in the Green Party, among many others.

Todd Chretien worked on several of Peter's California election campaigns in the 2000s and ran for U.S. Senate on the Million Votes for Peace slate that Peter headed as a gubernatorial candidate in 2006. Here, we print Todd's remarks.

I NORMALLY don't get nervous speaking in front of a crowd, but Peter's memorial means so much to so many people that I'm afraid I am very nervous here today.

I am happy to be here today speaking on behalf of the International Socialist Organization to talk about what Peter meant to us as an organization and to a younger generation of folks that I come from.

We've heard people today talk about Peter's impact on the civil rights movement, on the fight to end the war in Vietnam, in defense of the Cuban and Nicaraguan revolutions. We heard today from people who talked about Peter at the height of his influence--his capacity to influence large numbers of people and to explain theory and history to people who had never before had the opportunity to participate in those debates. But after that period--say, 1976 or thereabouts--we've lived through some pretty rough times. 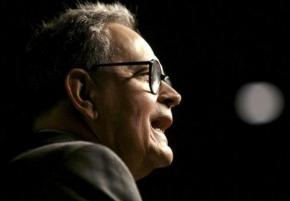 However, in the sense that Peter's ideas resonated with millions of people across this country, he was, for the likes of Ronald Reagan, the most dangerous man in California.

Unfortunately, Ronald Reagan won a 20- or 30-year battle. Starting in 1980 or so up until very recently, they've had it all their way. They turned back the revolution in Nicaragua through the bloodletting by the contras. They destroyed affirmative action. They won a war against the unions. They destroyed health care and education in this country. They have really had it all their way. The most horrific example has been the two wars they have conducted against the people of Iraq, in which they have killed millions of people.

And throughout that dark period, for people of my generation, the thing that shines through about Peter is that he never gave up for a moment. He never sold out his ideals, because they were not light-minded ideas, but well-founded principles upon which he built his life and his political activities.

That's what shines through, because there were precious few people who made that journey, and not only survived it--because the repression and all of the heartaches were real--but continued to speak from their hearts and their minds in order to educate a new generation of activists about what this political system will do to you if you don't take up a political struggle against it. For that, we owe Peter Camejo an incalculable debt of gratitude.

So it's a long struggle, but we believe, like Peter, that truth will win out. People will see through the lies and people will base their political actions on that.

Of course, Peter's passing is a terrible personal loss, and I can't begin to compare how I feel to his family, to those who have known him for decades, for 50 years. My heart goes out to his friends and family.

But I do want to say that if Peter Camejo was the most dangerous man in California in 1967 or 1968--and I don't often agree with Ronald Reagan, but I do in this instance--then I believe that in the next five years, even though we've lost Peter, his ideas will become the most dangerous ideas in this America.

Things are changing in this country. People have put up with a lot for a very long time. Peter was in the advanced guard. He was one of the people sounding the clarion call, ringing the bell: Wake up! Wake up!

And though we don't have him here physically by our side, I believe that millions of people are going to wake up in the years that come, and Peter Camejo's ideas will be part of their struggle. After all, today, even the Wall Street Journal is talking about socialism, which I find very interesting.

I'll end by asking you a few questions, and I hope that you will answer them in the way that you believe Peter Camejo would.

Do the working people of this world deserve a sustainable environment? (audience) YES!

Do the working people of this world deserve peace in Iraq and Afghanistan and Palestine? (audience) YES!

Do the working people of this world deserve powerful trade unions? (audience) YES!

Do the working people of this world deserve free health care? (audience) YES!

Do the working people of this world deserve an education just as good as the one you can get here at UC Berkeley? (audience) YES!

Do the working people of this world deserve the world that Peter wanted for them? (audience) YES!

I think that if we keep those answers in our hearts as we try--however we can, day by day--to fight every day, just like Peter did, to carry that struggle forward, then we haven't lost Peter. He will be there by our side.