Why isn't the owner of Peanut Corp. of America being "recalled" to a prison for murder, asks Andy Libson?

PEANUT CORP. of America is the target of one of the largest food recalls in U.S. history, after the company was linked to a salmonella outbreak responsible for over 600 illnesses and nine deaths across the country.

Incredibly, company owner Stewart Parnell isn't being "recalled" to a state or federal prison, but is resting at his house. These events are a tragedy for those killed, but they are best described as manslaughter or murder.

Initial investigations show that Parnell was well aware that peanuts from his plant were contaminated by salmonella, but urged workers and food inspectors to "turn them loose."

The motive? Profits of course. Parnell complained in e-mails that salmonella tests were costing him business, ordered a plant manager to ship products once identified as contaminated, and pleaded with health inspectors to let his employees "turn the raw peanuts on our floor into money."

Despite all the stories of Parnell being a "pillar in the community" or an "upstanding man" who made a mistake, this is not the first time Parnell has produced poison instead of peanuts. In 1990, federal inspectors found toxic mold in products produced in Parnell's peanut company in Virginia. 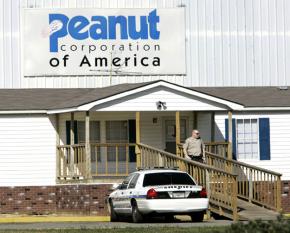 In 2001, inspectors found that peanuts may have been exposed to pesticides, and in 2006, Parnell's company hired a consultant to help resolve a salmonella problem at the Georgia plant.

Was Parnell fined or barred from producing peanut products after these incidents? Nope. He was instead recommended to serve on the U.S. Agriculture Department's Peanut Standards Board.

Are you kidding me? This guy shouldn't be allowed within 100 yards of a peanut, and he's asked to oversee standards for other peanut growers and marketers.

Now he faces "tough questions" from Congress members and reporters, but is pretty much staying quiet for fear of incriminating himself. He is described as a "recluse" in his palatial home.

Poor soul! In other circumstances, people who have been accused of what Parnell has done would be considered terrorists, and would be shoved into a dungeon in Guantánamo without due process to face waterboarding and other forms of torture. In reality, this analogy is unfair to the victims of Guantánamo and U.S. rendition who have been found to be mostly innocent and the victims of Islamophobia and anti-Arab racism.

Still, it's amazing how patient the capitalist class becomes when one of their own members "refuses to talk." Criminals like Bernie Madoff and Stewart Parnell don't face justice under capitalism because the system was not designed for them. It was made for the over 2.3 million people, mostly of color, who stew in jails for selling drugs, using drugs or often for nothing at all.

Most people are ultimately in jail for being poor. Murderers like Parnell stay out because they are rich.