A recovery that leaves workers behind

SocialistWorker.org's Lee Sustar answers questions about the shaky recovery in the U.S. and world economy--and the uncertain prospects for working people ahead.

THE NEWS on the economy seems good one day--a 5.7 percent increase in gross domestic product for the end of last year, a drop in the unemployment rate below 10 percent--but the next day, the stock market diving because of a debt crisis in Greece and some other crisis. What's happening?

LET'S START with the growth in the U.S. gross domestic product (GDP), which increased at an annual rate of 5.7 percent in the last three months of 2009. As many people pointed out, a big part of that growth is the result of companies' decisions to stop slashing inventories, which shows up in the GDP figures as growth. Take that away and the U.S. economy grew at a 2.2 percent annual rate in the last quarter of 2009.

Even so, it's clear that the U.S. economy is expanding. The question, of course, is when economic growth will be sufficient to create jobs. The news that unemployment fell from 10 percent in December to 9.7 percent in January may appear to be evidence that more jobs are in the pipeline. However, a much broader survey of employers shows that payrolls were actually reduced by 20,000 jobs in January. 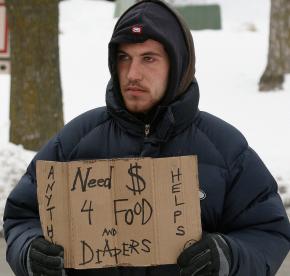 So the lower unemployment rate may well be the result of people simply dropping out of the workforce, and therefore out of the statistics. In fact, revised figures show that 8.4 million payroll jobs have been lost since the recession began in December 2007. The U.S. today has fewer jobs than it did a decade ago.

When jobs do come back, a flood of people back into the labor market will likely keep unemployment figures high for some time to come. Plus, employers' success in forcing workers to do more--productivity increased 5.1 percent in 2009, the fastest in eight years--means that bosses will keep squeezing their existing workforce and use technology to eliminate jobs as much as possible before they begin hiring again.

In any case, the broader figure for unemployment, which includes those working part time because they can't get full-time jobs, remains high at 16.5 percent. And the number of long-term unemployed--those out of work for six months or longer--remains at a record level of 6.3 million, an increase of 5 million since the recession began.

The modest job creation proposals coming from the White House and Congress won't do much to create the 11 million jobs that are necessary to restore U.S. employment to pre-recession levels.

WHAT ABOUT the possibility of a double-dip recession--growth followed by another downward lurch?

THAT FEAR is behind the policy debates in the U.S., Europe, Japan, as well as China, India and the bigger developing economies.

Finance ministers and central bankers are trying to chart an "exit strategy" from government stimulus packages that, worldwide, put $3 trillion directly into the system following the financial crash of late 2008. (In the U.S., the government has either invested, loaned or guaranteed some $13 trillion, a figure nearly the size of the U.S. annual economic output).

The stimulus was intended to prop up demand at a time when consumers and business investment were incapable of doing so. At the same time, central banks, led by the U.S. Federal Reserve, imposed near-zero interest rates to flood the world system with cheap money to help out cash-strapped companies--above all, the banks.

But all this has put a big burden on government budgets and increased government debt. There's also the fear that the easy money will result in inflation when the economy picks up momentum, creating a new set of economic problems. Hence, there's a growing pressure to wind down the stimulus through higher interest rates and reduced government spending.

But if policymakers are too quick to pursue an "exit strategy," they run the risk that businesses and consumers will fail to pick up the slack.

That's a likely scenario: In the U.S., businesses are saddled with excess capacity, which means they're unlikely to invest in additional factories and offices anytime soon. And consumers, awash in debt and burdened by low wages and high unemployment, simply can't resume their role as the buyers of last resort for the world economy. So a double-dip can't be ruled out.

WHY IS there so much talk about the debt of the Greek government?

THE GREEK government budget deficit and debt are symptoms of a broader problem in the European Union (EU): Monetary policy for the euro is set by the European Central Bank, but EU governments set their own budgets and sell their own bonds to finance those budgets.

Now, the so-called peripheral economies of the EU--Portugal, Italy, Ireland, Greece and Spain, a.k.a., the PIIGS--find themselves with big budget deficits and high levels of government debt. To meet EU rules, these governments have to slash budgets precisely when they should be spending money to boost their economies in order to overcome the effects of the recession.

Yet if they are unable or unwilling to carry out those cuts, it could lead to the weakening of the euro and possibly its demise. And if Greece or another country defaults on its government debt, it could be a big blow to banks and other financial institutions still struggling from the meltdown of 2008.

BUT CAN a small economy like Greece really have such a big impact?

SOME HAVE compared Greece's crisis to the sub-prime mortgage crisis in the U.S.--something that was supposed to be contained and have little effect on the financial system. In fact, Greece has become a focus for much broader worries about the effects of the government financial bailouts of late 2008 and early 2009.

Effectively, by bailing out their respective banks, U.S. and Western European countries turned to financial state capitalism, putting government guarantees behind their key financial institutions. What that means is the question of financial viability in the world economy today doesn't just revolve around this or that bank, but entire governments.

The PIIGS are the most vulnerable, so speculators are betting that those governments will default on their debts, get bailouts or both. But there are also worries about much bigger economies like Britain, and even the U.S.

DOES THAT mean that the U.S. "deficit hawks" are correct to argue that Washington must move to slash its budget deficits and pay down debt?

THE ANSWER is a qualified "no." No, because cutting government spending in the midst of a shaky economic recovery would practically guarantee a double-dip recession by depriving the economy of a much-needed economic boost. What's really going on here is an ideological assault to keep working people from demanding that the government do more to create jobs and maintain social services.

Media hacks and apologists for the system can't openly say, "The government will spend trillions to prop up bank profits, but there are only pennies left over for the unemployed or hard-pressed homeowners." Instead, they're trying to co-opt the justified mass anger at the banks and direct it toward a call for austerity and sacrifice.

Barack Obama himself got into the act by ordering a three-year budget freeze on discretionary government spending--everything outside the military and homeland security, of course.

But as Rep. Barney Frank (D-Mass.) said repeatedly at the World Economic Forum in Davos last month, the biggest drain on U.S. finances is the $664 billion the U.S. will spend this year on the military. Cuts in military spending, along with a tax increase on the rich, would go a long way toward reducing U.S. budget deficits. Of course, the conservative deficit hawks would never raise such solutions--and liberals rarely do, either.

But there is grain of truth in the deficit hawks' case. In a highly competitive world economy, in which the U.S. is challenged not only by other advanced countries, but also by rising powers like China, there is pressure for the U.S. to get its fiscal house in order to be less dependent on Chinese and other foreign investors to finance its government operations. There's also a fear that budget deficits would lead to a run on the dollar, risking either inflation or a sharp increase in interest rates that would choke off growth.

The deficit hawks' solution is for workers to accept a deep and permanent cut in their standard of living through lower wages and reduced government benefits. Obama, with his budget freeze and his endorsement of a bipartisan commission on reducing costs of Social Security and Medicare, has put a human face on this anti-worker agenda.

WHAT WILL be the shape of the world economy after the recession?

WE'RE EXPERIENCING what's being called the "LUV" recovery--an L-shaped pattern of growth in Europe, a U-shaped recovery in the U.S., and a V to describe rapid economic growth in China and other parts of Asia.

China, thanks to an economic stimulus package that was proportionately twice as large as that of the U.S., saw its economy grow by 8.7 percent in 2009--is poised to come out of the crisis stronger than ever. By comparison, the U.S. economy shrank by 2.4 percent last year.

The problem for the U.S. is that China, Japan, Europe and other big economies have the same strategy for an economic recovery: promote exports. As the Financial Times economics columnist Martin Wolf put it:

[F]ar too many countries are relying on export-led growth as the way to balance their withdrawal of domestic stimulus. This is a recipe for stagnation. The Earth cannot, after all, hope to run current account surpluses with the people of Mars. This leaves us with a big question: will it be possible to sustain an open world economy?

The U.S. solution, in part, is for China to develop its internal market to absorb more of its own goods. China, in fact, has taken steps in this direction. But its economy is overwhelmingly geared to exports, especially to the U.S., and is disproportionately tied up in heavy industry.

As the Wall Street Journal noted, China increased its steelmaking capacity threefold from 2000-2009, and by 2008 produced 36 percent of the world's steel. That's far more than China can absorb--which will mean still more pressure on Chinese business to export.

Even if the Chinese regime were to go all-out to create an economy with much greater consumption by the working class, it would take many years, if not decades, to achieve this.

The U.S. also wants China to allow the value of its currency to rise relative to the dollar, thereby making Chinese imports more expensive in the U.S. China, for its part, has leverage over the U.S. through its holdings of an estimated $2.4 trillion in currency reserves, much of it in dollars.

That makes a trade war between the U.S. and China a risky business for both countries. But with mass unemployment set to continue in the U.S., there will be rising political pressure for protectionism and other China-bashing measures.

WHAT WILL all this mean for working people in the U.S.?

IF CAPITAL has its way--and if an economic recovery takes hold--the "new normal" for the U.S. working class will be a markedly lower standard of living, with rising taxes to pay for the bank bailout. Jobs will be hard to find for the foreseeable future, and those working will work harder for less. Access to health care and government services like education will be rationed due to budget cuts. If there's a double-dip recession, the picture will be bleaker still.

It's a truism that workers have always had to fight for any gains they've made and keep fighting to maintain them. In the aftermath of the Great Recession, those words will take on a new relevance.