John Green reports from Southern California on a battle pitting miners and their supporters around the world against a giant--and highly profitable--corporation.

THE MINING giant Rio Tinto locked out union workers at its Boron plant in California's Mojave Desert at the end of last month.

The workers, represented International Longshore and Warehouse Union (ILWU) Local 30, had been negotiating for months following the expiration of their old contract. But on January 31, the company proceeded to use the lockout tactic--an economic terror tactic used by companies to break the workers' will by driving them to financial ruin.

The mining facility is being run by a skeleton crew of scab labor and management brought in from other Rio Tinto facilities. Observers estimate that fewer than half of the locked-out positions have been filled by the company and the "replacement workers" are struggling to keep operations going.

Rio Tinto is using the recession to attack its employees, which is particularly obnoxious for a corporation that reported $4.9 billion in profits last year. But this battle isn't about money (for now). The company is even offering a modest raise and other sweeteners to get what it really wants in Boron: a watered-down, tame union that will be powerless to resist management decisions in the decades to come. 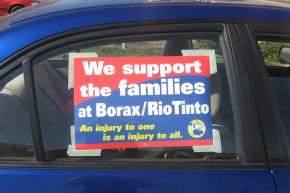 The company's final offer before the lockout included the following changes:

Elimination of half of all accrued sick days, the payout of sick days at 60 percent of employees' wages (currently 100 percent), and an annual "use it or lose" it provision for all future sick days;

Management's right to administer drug and alcohol tests, physical or mental examinations for any reason

A guarantee not to demote any employee for the first two years of the contract, unless they fail to meet "competency standards," but absolutely no guarantees after two years;

The right to reduce employee wages in order to pay any costs associated with employee lawsuits (such as over contract violations);

And the single most detrimental proposal to maintaining a strong union:

Elimination of seniority rights in promotion, transfer, scheduling and layoffs.

Accepting this contract would undoubtedly lead to the harassment or outright firing of union leaders and activists, alongside the gradual demotion of many skilled workers to lower-wage tiers.

UNDOUBTEDLY, RIO Tinto thought it could bully a small local in the desert with its goon squad of union-busting lawyers, private security firms and public relations machine. According to the Wall Street Journal, Rio Tinto has more than $2 billion in cash reserves. The profits lost at Boron will barely make a ripple for the corporation.

But the workers are standing firm, and miners around the world are backing them up. Declarations of solidarity have arrived from as far away as Poland and Turkey. An entire delegation of Australian mine workers arrived to lend support to their brothers and sisters. As the Australian miners put it, "When your employer is a multinational company that does business around the world like Rio Tinto, you need a network of friends across the globe who will step up and kick some ass, if that's what it takes, mate."

Union truck drivers are refusing to make deliveries to the Boron plant, and union rail workers won't deliver freight cars directly to the plant either.

Across the Mojave region, blue and red ILWU signs are taped to nearly every vehicle and stuck up in the windows of at least half homes and businesses. Unions in Southern California are donating groceries, and Local 30 is converting part of its simple, pale blue headquarters into a pantry for the families.

And the International Federation of Chemical, Energy, Mine and General Workers' Unions has pledged to initiate a global campaign against Rio Tinto, modeled on the Norway Government Pension Fund's $829 million divestment from Rio Tinto in 2008 (over low wages and environmental damage at its mine in Indonesia).

This much-needed solidarity is putting wind into the workers' sails, bolstered by a smart contract campaign on the local level. So far, Local 30 has emphasized open communication with the membership and rank-and-file involvement every step of the way.

Unfortunately, the local has claimed that it is fighting for "American jobs" against a foreign corporation. But the real story here is the emerging international solidarity of workers that transcends national boundaries. The jobs at Boron are union jobs--and it will take international unity and solidarity among union workers to defend them.

Although the locked-out workers don't qualify for strike benefits, they can apply for unemployment instead. This and the union food pantry will help families make do for a time. Backed by the international union and solidarity, the workers of Local 30 are much more formidable than might otherwise be imagined.

Many workers in Local 30 understand that the outcome of their struggle will have far-reaching consequences--it can fit into the pattern of concessions and union-busting underway during the recession, or it can it revive the concept of solidarity and class struggle unionism in the way that the Republic Doors & Windows fight galvanized resistance.