Goldman Sachs and the rest of Wall Street gambled on food. Their bets paid off big time--at the cost of igniting a food crisis that pushed hundreds of millions into the ranks of the hungry. Alan Maass, author of The Case for Socialism, looks at their crimes.

LAST YEAR, Rolling Stone journalist Matt Taibbi wrote a damning exposé of mega-bank Goldman Sachs that began by describing the Wall Street giant as "a great vampire squid wrapped around the face of humanity, relentlessly jamming its blood funnel into anything that smells like money."

It's an apt description and one we quoted more than once at SocialistWorker.org. Goldman Sachs helped inflate the housing bubble of the 2000s in order to keep the Wall Street casino going strong. It hyped investments based on pooling huge numbers of mortgage loans, some headed for foreclosure--and it provided other "opportunities" for investors to gamble that the same mortgages would go bad. And whatever the investment, Goldman Sachs executives were there with their hands out, raking in fees from every deal.

Then, when the housing bubble burst--and in the process pushed the world financial system to the brink of a meltdown--Goldman unerringly aimed its blood funnel at another huge pot of money: the U.S. Treasury. In a bailout engineered in part by former Goldman executives, the federal government rescued Wall Street and returned the big banks to financial health with an immense infusion of money from U.S. taxpayers. 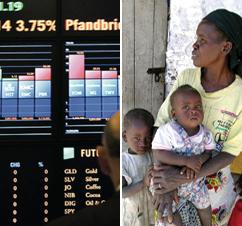 But a year has passed since Taibbi wrote his article, and based on what we've learned since, it's worth asking: Was comparing Goldman Sachs to a vampire squid too generous?

Is Matt Taibbi, in fact, guilty of insulting vampire squids?

For example, earlier this year, Congress investigated a scam from a few years ago in which Goldman created a security that was designed to fail--anyone who invested in it lost their money. Why was it designed to fail? So hedge fund boss John Paulson could place a financial bet that the security would, in fact, default. Paulson made a cool $1 billion on a sure thing--and, once again, Goldman pocketed big fees for setting it all up.

And now, more details are emerging about a Goldman Sachs plot that wreaked deadly havoc around the world--speculation on food commodities, which pushed prices for the most basic of necessities through the roof, sparking rioting in dozens of countries and causing untold misery in the rest.

Whatever else can be said about them, vampire squids don't understand the consequences of their actions. Goldman Sachs, on the other hand, knew exactly what it was doing to people around the world.

The banksters knew that if their schemes went exactly according to plan, millions of people would lose their homes, and hundreds of millions would go hungry. But there was money to be made--so Goldman pulled the trigger.

GOLDMAN SACHS' contribution to the food crisis of 2007-08 is a particularly ugly chapter in the career of global capitalism's super-villains.

Overall, according to the Economist magazine, the real price of food, after accounting for inflation, reached its highest level since 1845, when the magazine first started calculating the statistic.

The food price increases had horrifying consequences around the world. For example, a New York Times reporter described being confronted in Haiti by a mother who was holding an infant in her arms and pointing to four other children, all of whom had gone without food that day. "Take one," the woman said. "You pick. Just feed them."

According to Harper's journalist Frederick Kaufman, author of an excellent article on what he calls "the food bubble" of the mid-2000s, the crisis pushed 250 million more people--almost the population of another United States--into the category of "food insecure." The ranks of the world's hungry jumped past the 1 billion mark.

Even in the U.S., food prices reached levels not seen in a generation. In 2008, the number of Americans vulnerable to hunger grew to 49 million, or about one in every six men, women and children in the country. By the end of the year, 36 million people were getting food stamps from the federal government, an increase of nearly 40 percent in just two years.

And then, just as quickly, food prices started falling again. By the end of 2008, they were close to their pre-crisis levels at the big commodities exchanges where agribusinesses and investors trade large quantities of food--though the prices that consumers paid didn't drop nearly as fast.

What happened? Was there some kind of terrible natural disaster that radically reduced the supply of food? No. Natural causes like a drought in Australia played some role, but, for example, global wheat production increased during the period, according to the International Grain Council.

One man-made cause of the crisis was rising oil prices, resulting from the U.S. war on Iraq--which drove up costs for nearly every aspect of agricultural production, from the making of fertilizer to transportation. Another was the U.S. government's biofuel craze, which led agribusiness to take land away from other crops to grow corn for ethanol.

But it turns out that the most important cause of the food crisis of 2007-08 was commodity speculation. Wall Street's biggest players saw an opportunity for profit by manipulating the price of food, and they took it--at the cost of people around the world going hungry.

So to ask again: What happened? The short answer is: Goldman Sachs happened.

HOW COULD Wall Street speculate on something so important to people's lives as food? For more than a century, agricultural producers in advanced countries have relied on a system where they sell crops or products that they promise to deliver in the future. In theory, this "futures" system protects producers against the risk of a bad harvest or price decreases, and it assures businesses that buy agricultural goods of a steady supply.

The introduction of futures trading at commodity exchanges opened up opportunities for speculators to bet on whether the price for contracts to deliver some product--wheat, corn, cattle, etc.--would rise or fall before they came due.

This was nothing more than gambling, with people's livelihoods as the stakes. But the damage speculators could do was limited to at least some extent by the basic rules of futures trading--that actual agricultural products ultimately had to exchange hands somewhere in the system when the futures contracts came due.

Enter Goldman Sachs. In 1991, it launched the Goldman Sachs Commodity Index--a measure of the price of 18 different commodities--and invited speculators to place their bets on whether it would go up or down. Other Wall Street firms copied Goldman and set up their own agricultural index funds.

Moreover, Goldman turned the traditional method of the commodity speculators--buy low and sell high--on its head with an emphasis on always buying more and more, and pushing off any losses into the future. The key for Goldman wasn't the direction of commodities prices, but that the market kept sucking in cash, which could then be plowed into more speculation far removed from agricultural commodities.

Of course, government regulations on commodities trading needed to be loosened for the new system to thrive--but the Clinton administration, under Treasury Secretary Robert Rubin, was happy to oblige.

The stage was set for a speculative frenzy on agricultural commodities unlike anything seen in the past. It took another decade for the catastrophe to materialize because there were other more lucrative opportunities for financial gambling--first the tech bubble of the 1990s, then the housing bubble of the 2000s.

Food's turn came in the mid-2000s. The big Wall Street players like Goldman Sachs recognized that the mortgage and real estate markets were poised for a fall. The gamblers had to find a new table at the casino--and the agricultural commodity index funds looked good. In 2003, holdings in these funds totaled $13 billion. Five years later, there was $317 billion invested in commodities index funds.

The same logic that inflated the housing and real estate bubble was now operating on food prices. With more and more speculators climbing into the market, prices shot upward. The price of the main variety of wheat traded in the U.S. historically varies $3 and $6 per 60-pound bushel. That price started climbing--doubling and doubling and doubling again. On February 25, 2008, wheat futures hit $25 a bushel.

At this point, the price that investors were willing to pay for a gamble on the cost of future commodity prices had surpassed the so-called "spot" price to buy the same commodity in the here and now--and so the spot price was dragged upward, too. People the world over felt the effects of casino capitalism on a new realm of their life.

WALL STREET'S responsibility for the food crisis is an extreme example, but the underlying logic of food production under capitalism, even in normal times, is no less obscene.

Year in and year out, the statistic from the United Nations is horribly similar--around 6 million children under the age of 5 will die in the next 12 months from malnutrition and related diseases.

This isn't because the world doesn't grow enough food. Even conservative estimates calculate that enough food is produced around the globe for everyone in the world to get 2,800 calories a day, well above the minimum standard set by the UN Food and Agriculture Organization. And that isn't to speak of what could be cultivated if the world's agricultural system was made more efficient.

But that 2,800 calories a day depends on the food produced being shared equally. It isn't. Food costs money, and that means the poor go without.

As World Food Program Executive Director Josette Sheeran put it: "We are seeing more urban hunger than ever before. Often we are seeing food on the shelves but people being unable to afford it." The Financial Times made the same point years ago more bluntly: "People are not hungry these days because food supplies are not available. They are hungry because they are poor."

In a capitalist system, food is treated like any other commodity, from cars to televisions to pharmaceuticals and health care. Instead of being organized to feed the hungry, the system is organized around not feeding everyone.

The explosive rise in food prices in 2007-08 came as supplies held steady, and in some cases expanded. The year when the price of a futures contract for wheat doubled and doubled and doubled again was the greatest wheat-producing year in world history, according to Frederick Kaufman.

When Kaufman talked to a grain trader about the market manipulations during the food bubble, he asked whether agribusiness ought to see itself as responsible to society for maintaining a stable supply of a fundamental necessity of human life.

No way, said Todd Posthuma, who works at one of the main exchanges for trading wheat contracts. "I view what we're working with as widgets," Posthuma said.

There can be no greater indictment of the capitalist system than the fact that its masters view food not as something that all people must have--and that more than 1 billion people desperately need more of--but as a thing that can be bought and sold, in order to acquire more riches.

As Johann Hari concluded in the Independent: "The world's wealthiest speculators set up a casino where the chips were the stomachs of hundreds of millions of innocent people. They gambled on increasing starvation and won...What does it say about our political and economic system that we can so casually inflict so much pain?"