We won’t get more by settling for less

It's up to people outside Washington to build the struggles that will make a difference.

"I'VE BEEN out of work since April, but there were a lot of people in line with me who were out longer than that," Larry Smizer told the Chicago Tribune as he stood alongside thousands of workers who lined up at 8 a.m. for a chance at one of the 400 jobs at a Chicago-area Ford plant this summer.

But by 11 a.m., the security guard was telling drivers trying to enter the packed parking lot: "Here for Ford? It's over. Too late. No more applications for Ford." The 2,000 applications were gone.

The October 2 One Nation Working Together rally provides an opportunity to bring the brewing anger at these conditions out of the shadows and into the spotlight of U.S. politics.

The rally is obviously timed by its organizers to help get out the vote for the Democrats in November. But with demands for good jobs, equal justice and quality public education for all, it's also a chance for the voices of unionists, community activists and civil rights organizations to take center stage--rather than the voices of reaction and bigotry that have dominated Washington politics with events like Glenn Beck's Tea Party creep show in August. 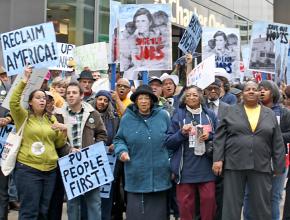 The protest can show the potential to push back against the right's assault--but also for activists to come together and begin organizing for the things we believe in. That will mean building the kind of independent struggles and organizations that can force the bipartisan political establishment--to listen.

FOR THE labor unions and civil rights organizations that called the One Nation rally--timed exactly one month before the midterm elections--the single-minded focus is on building support for Democrats. That's why some high-powered political figures--like former Democratic National Committee chair Howard Dean--are promoting the rally.

The Democrats and their supporters are relying on fear of the right winning back power in November to try to scare up votes.

And it is true that the Republicans' pro-business, anti-worker agenda is the stuff of nightmares. The right wing is dominating U.S. politics, from threats against Social Security and the elderly by crackpot former Sen. Alan Simpson to Sarah Palin's ranting against an Islamic center being built in lower Manhattan.

Socialist groups and progressives are coming together for a socialist contingent in Washington at the "One Nation" rally on October 2. You can read the call for the contingent at SocialistWorker.org.

Join us in Washington--the contingent will meet up at 10 a.m. at 12th and Constitution (NW), Washington, D.C. Following the rally, join activists at a meeting on "Socialism for the 21st Century" featuring Dan La Botz, Keeanga-Yamahtta Taylor and others.

But if Republicans are driving the agenda in Washington, the Democrats have only themselves to blame for this. Even with a Democrat in the White House and firm majorities in both houses of Congress, they have refused to wage a fight.

The latest surrender: The Democrats refused to push a vote on repealing the Bush-era tax breaks for the super-wealthy, something they've been promising for years and years.

And if the Democrats want to blame Republicans for Congress' failure to pass the DREAM Act and to repeal the anti-LGBT "don't ask, don't tell" policy, they should have to answer for their own cynical maneuver of attaching these reforms as amendments to a $670 billion war spending bill.

Moreover, on some fronts, Democrats are actually leading the assault on working people. Take, for instance, the attack on public school teachers with the administration's punitive Race to the Top, which dangles the lure of $4.3 billion in extra funding in front of state governments--as long as they pass laws that impose merit pay on teachers.

It was Obama's, not Bush's, Justice Department that gave the go-ahead for raids on antiwar activists' homes last weekend in Chicago and Minneapolis. And it was Obama's Pentagon that carried out a dramatic escalation of the war in Afghanistan.

If the Democrats lose in November, they will have themselves to blame--for not delivering on their promises and caving in to Republican opposition.

BUT INSTEAD of examining their own inaction and betrayals--or even saving some ammunition for the Republicans--Obama and the Democrats are going after anyone who dares to make a demand of them from the left.

Speaking at a recent fundraising event for congressional Democrats in New York, Obama was heckled by AIDS activists holding signs that said "Obama: Broken Promises Kill." He responded: "You don't need to yell...We heard your point...I want us to talk about what's at stake in this election, because the people that will potentially take over if we don't focus on this election, I promise, will cut AIDS funding. So this is neither the time or the place to do what you're talking about."

Despite the irksome outburst, Obama raised $1.4 million for House and Senate Democratic campaign committees that day.

If the Democratic Party's contempt for left-wing activists wasn't open enough, Obama made it crystal clear at a $30,000-a-plate Democratic National Committee fundraiser.

There, in the cozy comfort provided by wealthy supporters in Greenwich, Conn., Obama mocked his liberal critics:

Democrats, just congenitally, tend to get--to see the glass as half empty. (Laughter.) If we get an historic health care bill passed--oh, well, the public option wasn't there. If you get the financial reform bill passed--then, well, I don't know about this particular derivatives rule, I'm not sure that I'm satisfied with that. And gosh, we haven't yet brought about world peace and--(laughter.) I thought that was going to happen quicker. (Laughter.) You know who you are. (Laughter.) We have had the most productive, progressive legislative session in at least a generation.

Salon.com's Glenn Greenwald provided the translation: "If you're one of those people dissatisfied with large parts of the Obama presidency, that's only because you have something wrong with the way you think...and because you are saddled with extremely unrealistic, child-like expectations."

This is a long way from candidate Obama, who, when asked if he thought Martin Luther King would endorse him, said:

I believe change does not happen from the top down. It happens from the bottom up. Dr. King understood that.

It was those women who were willing to walk instead of ride the bus, union workers who are willing to take on violence and intimidation to get the right to organize. It was women who decided, 'I'm as smart as my husband. I'd better get the right to vote.' Them arguing, mobilizing, agitating and ultimately forcing elected officials to be accountable. I think that's the key.

Today, however, Obama and the Democratic Party have another message for activists: It's your fault if Democrats lose in November, so stop complaining and protesting.

The Daily Show's Jon Stewart joined in with his own mockery of activists, calling for a "Rally to Restore Sanity" on October 30 in Washington, D.C., with the aim of holding "a million moderate march." The problem, argues Stewart, isn't just the right-wing blowhards, but the left as well--antiwar activists get lumped in with Tea Partiers.

Ordinarily, Stewart's show is a welcome reality check on Washington politics and Fox News, but when he stands cynically above the fray, calling to "Take it down a notch, America," he misses the point.

It's time for our side to take it up a notch--and a lot more besides. Because there are two sides in this fight, and ours needs to be stronger.

There are two sides to the fight for better living standards for workers, to the struggle to defend Muslims, to the battle over anti-immigrant legislation like Arizona's SB 1070, to the struggle against the U.S. military's slaughters in Iraq and Afghanistan, and to the campaign against Israel's war crimes against the Palestinians.

Our side is stronger when we refuse to accept the compromises that the Democrats try to extort from us, and when we build our own independent struggles and organizations.

No compromise is acceptable when it comes to standing with Muslim brothers and sisters at the proposed site of an Islamic center in New York City, on the picket line of Mott's workers, on a freedom flotilla in solidarity with the people of Gaza, in a protest against cuts to public education, alongside LGBT people demanding a repeal of the Defense of Marriage Act, and with undocumented immigrants demanding an end to deportations.

Of course, when activists refuse to compromise, they're denigrated for having "unrealistic" expectations and not understanding that real change comes only from accepting the limitations of the Democratic Party and working within it. But the unrealistic ones are those who think the Democrats will do the right thing if we just give them enough time and support.

They won't do the right thing. It's up to us to organize the struggles that can make a real difference in this society.