Liberals ought to stop praising Barack Obama just for standing up to Republicans.

THE MEDIA consensus is in about Barack Obama's State of the Union address: his speech was aggressive and progressive, challenging the Republican Party to deliver on immigrant rights, raising the minimum wage, climate change and more.

This was "less a presidential olive branch than a congressional cattle prod," wrote Glenn Thrush of Politico. Among many liberal commentators, the mood was celebratory. "Obama sent a clear signal," wrote Mother Jones' David Corn. "He will vigorously pursue an unambiguous progressive agenda in his final years as president."

But when you peel away the rhetoric, the real Obama isn't the progressive firebrand liberals wish he was, but a conventional politician squarely at the center of the bipartisan political establishment in Washington--someone who calls for "compromise" with Republicans on "reforming" Social Security and Medicaid; whose answer to climate change is the fantasy of "market-based solutions"; whose proposals to spur job growth are puny compared to the need. 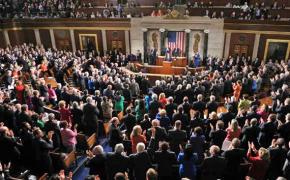 For a mainstream media that never acknowledges any political opinion outside the narrow confines of the two-party system, Obama and Republicans like Florida Sen. Marco Rubio define the extremes of left and right.

A better description would be center-right and right-right. Beyond his water-gulping episode, Rubio's response to the State of the Union showed that the Republicans remain devoted to an agenda of cuts, cuts and more cuts--priorities that may play well to the remnants of the Tea Party and its big business backers, but which are more and more obviously out of step with majority public opinion.

The Republicans' headlong rush to the right has allowed Obama and the Democrats to position themselves as the "responsible" party that avoids both "extremes"--a pro-business alternative to the Republicans' seeming willingness to run the economy off the fiscal cliff, but also and especially to the popular sentiment, concentrated among the Democratic Party's base supporters, for government programs that create jobs, defend seniors and the vulnerable, and help those who have borne the brunt of the Great Recession.

Obama the speaker may have tried to play to that popular sentiment at points in the State of the Union, but Obama the president is getting ready for a second term defined by austerity and continued deep cuts in working-class living standards--sold with appeals for "shared sacrifice" in which the majority of working people do all the sacrificing, and the rich and powerful don't have to share anything.

OBAMA TALKED continually about the "middle class" in his State of the Union address--and very little about workers and the poor.

He did dust off an old promise to raise the federal minimum wage--to $9 an hour from the current $7.25. It's certainly long past time that the working poor got some measure of help from Washington. But a full-time minimum-wage worker getting $9 an hour would make roughly $18,000 a year--still below the federal poverty line for a family of four. That's just not enough action from the man who declared that "in the wealthiest nation on Earth, no one who works full-time should have to live in poverty."

Actually, Obama campaigned in 2008 on a promise to raise the federal minimum wage to $9.50 an hour by 2011, but he never followed through, even when the Democrats held both houses of Congress. Once you remember that Green Party candidate for president Ralph Nader was talking about a $10 an hour minimum wage back in 2000, Obama's plan sounds even less radical.

Otherwise, Obama's speech was notable for what he left out about the 99 percent--no discussion of workers and their unions, which have come under sustained assault from Corporate America and their Republican political servants. And America's first Black president said very little about the economic and social injustices faced by African Americans, who continue to bear the worst impacts of the recession.

Obama did promise to make immigration reform a priority in the coming year--further testament to the movement of immigrant youth that has kept up pressure on the administration and the strong Latino turnout for the Democrats last November.

But Obama's proposal shares all the features of previous bipartisan proposals for "comprehensive immigration reform"--measures designed to be of maximum benefit to Corporate America, paired with harsh penalties, background checks and border security. Immigrant rights activists point out that even the provisions for a "path to legalization" are filled with inhumane restrictions and penalties that will further punish immigrant workers and their families.

Obama's speech contained numerous proposals that may sound good--like tax credits to expand access to higher education--but which are tied in profound ways to the stultifying neoliberal consensus that has dominated Washington politics for decades.

Thus, in general, Obama's education policies start from the assumption that the problem with the economy is a "skills mismatch," and workers need to be educated better. But in fact, education levels have continued to rise in the U.S., even as wages have stagnated and declined. The problem isn't workers' skill levels, but the kinds of jobs that are being produced in today's low-wage economy.

And don't expect any bold action to create more and better jobs--even though administration officials insisted this would be the centerpiece of the State of the Union address.

The amounts the Obama administration is proposing in areas specifically tied to job creation--$50 billion for infrastructure spending, $15 billion on construction jobs, and a paltry $1 billion to spur manufacturing jobs--are drops in the bucket, and that's before the White House has started bargaining with Republicans. Consider these numbers in comparison to the $787 billion stimulus law that the Obama administration pushed through during its first month in the White House in 2009--and even liberal writers believed at the time that the stimulus was underpowered.

What's more, whatever good these programs would do if enacted will be swamped by the ongoing austerity offensive--still in full swing as Obama begins his second term.

Obama is demanding that Congress do something to stop automatic cuts in government spending of $1 trillion, known as the "sequester," that are due to go into effect on March 1, after being delayed by two months because of the fiscal cliff deal. But his administration is on the record as committed to cutting $1.5 trillion over 10 years, and largely in non-defense programs, unlike the across-the-board sequester.

The pain may be spread out over a longer period, but this is an unprecedented level of austerity. At the end of 10 years, domestic discretionary spending would be around 2.5 percent of gross domestic product, the lowest level since the early 1950s.

Obama isn't putting off today what can be done tomorrow either. As liberal commentator Robert Kuttner reported:

The president's own [fiscal year 2013] budget proposes to cut domestic spending by some $24 billion, including $200 million for coastal impact assistance (!), and $359 million for clean drinking water. And this is just the president's opening bid. The Republicans will demand far deeper cuts as their price for avoiding the sequester.

UNFORTUNATELY, THE desire to see Obama "get tough" with Republicans seems to have warped the judgment of some liberals--who have convinced themselves that the president is really going to deliver this time around.

They act as though Obama has been a mere bystander in the debates over budget cuts and austerity in the past few years. Typical was the Nation magazine's John Nichols, who declared:

Obama's speech delivered a bold economic message--a rejection of the austerity threat posed by Paul Ryan and the Republican right in favor of a job-creation agenda--and it renewed the liberal promises of his recent inaugural address: fair pay for women, fair treatment for lesbians and gays, immigration reform, a return to seriousness with regard to climate change. The president was still too supportive of free-trade fantasies and he made an unsettling, if ill-defined, bow to the wrongheaded approaches of the Simpson-Bowles commission. Yet his speech was aggressively progressive on a host of issues.

But Obama didn't just make a "bow" to the Simpson-Bowles commission's proposal for $4 trillion in deficit reduction over the coming decade, through a combination of spending cuts and tax increases, many of them regressive. He appointed the commission when Congress refused to do so--and he's continued offering its recommended "grand bargain" of massive spending cuts, including in entitlement programs like Social Security and Medicare, in exchange for some income tax increases that would still leave rates historically low.

When Obama stated in his State of the Union address that the millions of people who want programs like Medicare to continue must "embrace the need for modest reforms," the question should be asked: Why? Why should working people embrace cutbacks in the federal government's most popular programs? Why should seniors and working families bear any of the sacrifice at a time when the wealthy are making out like bandits?

Obama has so far taken a tougher stand against the Republicans than he did in his first four years, when he gave up ground again and again. That doesn't mean the White House won't cave, over the sequester or some other issue. But even if they don't retreat, Obama and the Democrats sure can't be described as standing up for a progressive agenda.

It's time for the labor movement, liberal organizations and the broader left beyond them to stop praising Obama for merely opposing the Republican right. Working people need to fight for the agenda we want, not Obama's hollowed-out, compromised version.

The only way Obama or any other Washington politician will match the rhetoric they use to appeal for votes with actual action is if we build a working-class alternative in all the struggles taking place in U.S. society.