Why don’t we mourn equally?

Danny Katch considers the consequences of a society where violence is bitterly opposed in certain forms--but celebrated and glorified in other forms.

ON THE same day that three people were killed at the Boston Marathon, terror bombings in Iraq and Somalia killed 37 people and 35 people, respectively.

Relax. You're not about to be lectured for having a stronger emotional response to the death of Boston's 8-year-old Martin Richard than to the deaths of children thousands of miles away. The important question isn't why we feel more love and empathy for those who live closer to home--but why we're discouraged by some of the most powerful institutions in society from extending these powerful emotions at all to victims in other parts of the world.

Imagine for a moment President Obama taking a minute after the Boston Marathon bombing to extend our national mourning to the dead from the bombings in Iraq and Somalia, on the grounds that all human life is equally sacred.

Such a simple, noble sentiment would have sent Fox News--and plenty of others--into a foaming rage. What a damning indictment of patriotism.

After a bombing, any reference to the wider context of global violence--especially if that violence has the fingerprints of the Pentagon on it--is immediately denounced as "politicizing" a tragedy. But politics is actually the reason why we don't equally mourn all the victims of violence, regardless of nationality, from those maimed by IEDs to those killed by abusive husbands. 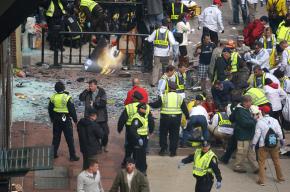 Those who claim to be guarding our collective grief from crass exploitation and politicization should focus on the Islamophobes in the media who spent last week spreading lies about "dark-skinned" and "Saudi" suspects--or Republican Sen. Charles Grassley's lame pathetic attempt to use the bombing as an argument for tighter restrictions on immigration. But not gun control, of course--the Republicans united to defeat new legislation just days after the bombings.

THE BIGOTRY and scapegoating toward Arabs and Muslims are a continuation of trends that have been on the rise since the September 11 attacks more than a decade ago.

In other ways, however, the public reaction to the Marathon bombings might turn out to be different. Boston produced all the grief, rage and trauma of previous terror scares, but there's no longer a sense of shock.

That's because violent national tragedies are becoming regular occurrences, and "terrorism"--if we use the term the way our media does, only describing the deeds of Arabs and Muslims--has not been the primary culprit in most cases.

The 2001 attack on the World Trade Center and Pentagon was a rock through the windshield of America's sense of isolated security. Most of us were shocked that living inside the richest and most powerful nation in history did not make us immune to the sickness and hatred of a world our government helped create. For the next decade, American politics revolved around the demand for a return to the old invulnerability.

In The American Way of War: How Bush's Wars Became Obama's, Tom Engelhardt describes how 9/11 reverberated through the following decade:

Opinion polls indicate that terrorism is no longer at the top of the American agenda of worries. Nonetheless, don't for a second think that the subject isn't lodged deep in national consciousness. When asked, "How worried are you that you or someone in your family will become a victim of terrorism," a striking 39 percent of Americans were either "very worried" or "somewhat worried"...

People always wonder: What would the impact of a second 9/11-style attack be on this country? Seldom noticed, however, is that all the pinprick terror events blown up to apocalyptic proportions add up to a second, third, fourth, fifth 9/11 when it comes to American consciousness.

September 11 was the national equivalent of the scene in The Untouchables, in which the Feds going after Al Capone walk into a police station elevator and discover that a hit man has murdered one of their team and used the dead man's blood to paint the word "TOUCHABLE" on the elevator walls.

But these days we all feel touchable, whether it be from terrorists, gunmen or an overheated planet. Before Boston, there was Newtown, and before Newtown, there was Sandy--and Aurora and Tucson and Joplin and Katrina...

The Marathon bombing itself seems to blur the line we've so carefully constructed between "terrorist" and "disturbed gunman." If most of what we are learning about Tamerlan Tsarnaev is accurate--an enormous leap of faith considering the media's abominable job covering this story--then it's unclear whether his path to violence was that different from those of Jared Loughner or Adam Lanza, only with different political justifications.

In fact, Martin Richard and his wounded sister are the just the third time children from the Northeast Corridor were intensely mourned in the past six months. Of course, I'm referring to the 20 students killed at Sandy Hook Elementary. But I'm also thinking of Connor and Brandon Moore, the two boys snatched by a rising sea from the arms of their mother Glenda as she tried to flee their Staten Island home during Hurricane Sandy.

The prevalence of this feeling of collective vulnerability--which also stems from a global economic crisis that never seems to end--means that the Marathon bombing might be the first terror attack to take place in a post-post-9/11 America, a place where many are beginning to sense that their fates are connected with those of other people on this planet, and the planet itself.

OF COURSE, there's nothing post-post-9/11 about the homeland-security-industrial complex, which in the last week has taken another step in consolidating its power over our civil liberties.

For the 24 hours that the country was glued to the police hunt for Dzhokhar Tsarnaev, the fact that Boston was locked down might have seemed like an extreme but understandable measure. Now that it's over, I'm hoping that many people will find it troubling that de facto martial law was declared in a major American city because a wounded 19-year-old was on the loose.

Every year since 9/11, big city police departments have been improving their ability to mount a militarized response to various threats--ranging from terrorist violence to peaceful political dissent--with minimal public discussion about whether this is legal or desirable.

All this training and equipment creates an institutional desire to deploy. In other words, it's not clear if the police locked down Boston because it made sense--and remember that the younger Tsarnaev brother was only found after the lockdown had been lifted, and civilians were allowed out of their homes, and a Watertown resident discovered the suspect in his backyard--or simply because this is what they train to do.

The Marathon attacks are going to be used to justify ramping up state powers even as many so-called terrorism experts admit that the attacks were exactly the type that is almost impossible for the state to counter. The Brookings Institution's Bruce Reidel told the Wall Street Journal that Boston was "the counter-terrorist community's worst nightmare, homegrown, self-radicalizing terrorism that learns its skill set off the Internet."

The most militarized police forces imaginable can't prevent this seeming increase in the number of people here who want to commit horrific public violence. On the contrary, there is plenty of reason to think that the glorification of state power and violence makes the problem worse.

Until the suspects were identified, everybody feverishly wondered if the attacker was affiliated with Islamist networks or the American far right, as if that's the essential question. Either way, the root cause of both vengeful sleeper cells and paranoid racist militias is what Martin Luther King once called "the greatest purveyor of violence in the world": the U.S. government.

Of course, many people will angrily object to this point. They think we should continue to pretend that the U.S. can carry out a worldwide policy of assassinations, torture, night raids and stoking sectarian violence--justified by airwaves filled with racist poison--and not expect there to be any consequences back in the homeland.

In the same speech, Martin Luther King also pointed out that "the bombs in Vietnam explode at home." He was referring to the gutting of anti-poverty programs to pay for war. Certainly nothing has changed in that regard, but today, King's words are true in a more literal sense, as the bombs--and assault rifles, drones and Special Ops forces--in countless foreign lands explode at home in so many ways.

Meanwhile the urgent war that needs to be fought against climate change cannot be effectively waged until people of all nations unite and fight as one species. So we better start reconditioning ourselves to mourn equally for the dead of Baghdad and Boston.