The Republicans may not get away with defunding Barack Obama's health care law, but they're pushing ahead with all their favorite anti-worker, pro-business measures.

THE LATEST congressional showdown over federal spending--with another threat of another government shutdown looming over it all--is starting to look like a bad TV police drama, ending with a familiar scene of "good cop/bad cop."

The "good" cop: the Obama administration and the Democrats, loudly insisting that they'll never give up on health care reform or let the government close because they care about working people--while quietly agreeing to many of the cuts and concessions that the Republicans want, and claiming they're being "responsible" for doing so.

The two sides seem so far apart that they'll never agree on anything, but we all know how "good cop/bad cop" works. The Republicans and Democrats are getting much more of what they each want than anyone lets on--and the target of their routine, which in this case is tens of millions of working-class Americans, is getting played. 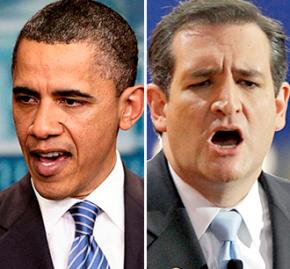 The same scene has spun out over and over during the Obama presidency--the Republicans playing the part of the budget-cutting maniacs, pushing hard to shred the social safety net altogether, while the Democrats act like they're powerless to do anything about it, and then go along with most of what the Republicans want.

The Democrats support the least-worst "realistic" option--and claim it's the best they can do.

In the summer of 2011, the Obama administration needed an act of Congress to raise the debt ceiling or the U.S. government would go into default--but the Republicans refused even Obama's offer of a "grand bargain" to impose three times as much reduction in spending, including Social Security and Medicare, as increases in tax revenues. Even Corporate America warned against the Republicans' game of chicken with the world economy. But it was the Democrats who capitulated, agreeing to even deeper spending cuts.

There were more showdowns at the start of 2013, in the wake of an election that Obama won easily. The outcome: Obama agreed to $85 billion in federal spending cuts, including furloughs of thousands of federal workers and cuts to supplement jobless benefits for the long-term unemployed.

If this is "standing up" to the Republicans, you don't want to know what caving in looks like.

NOW, THERE'S another looming government shutdown, and the Affordable Care Act is on the chopping block. October 1 is supposed to be the start date of the new state-based "insurance exchanges," created under the 2010 health care law, where individuals who don't have health insurance can go to obtain "minimal essential" coverage. If they don't, they risk paying penalties with their taxes.

The individual "mandate" will force millions and millions of new customers into the arms of private insurers--and leave billions and billions of dollars in their bank accounts. The insurance giants knew there were windfall profits to be made from a new health care law, which is why their lobbyists were in place to help shape the legislation--to make sure, for example, that there was no "public option" for mandated insurance that would compete with private companies.

That was the "inside" strategy, while the Republicans represented the "outside" strategy--continual obstructionism to make sure the Democrats continued to compromise on every question.

This "Plan B" continues today. Last week, the Republican-controlled House voted--almost exactly on party lines--to continue funding federal government operations after the cutoff date of September 30, but to defund the ACA. With a tear in his eye, House Speaker John Boehner called this a "victory for the American people and a victory for common sense."

Then, Texas Republican Sen. Ted Cruz took the fight to the Senate, where he staged his own filibuster on Tuesday, claiming that the Democrats were willing to risk a government shutdown rather than put the brakes on the health care law.

Most Senate Republicans distanced themselves from Cruz. But they don't want to distance themselves from the assault on the health care law. Thus, Senate Minority Leader Mitch McConnell of Kentucky said he disagrees with the threat to shut down the government as of September 30--but he's just fine with gutting the ACA.

The ACA is a far cry from what's needed to provide access to affordable health care in the U.S. But that's not why Republicans are opposing it. From Boehner to Cruz and the others, the Republicans' fierce opposition to "Obamacare" is another example of playing politics with people's lives for personal gain--sometimes very personal gain.

While Cruz says his stance on health care is all about the folks back home in Texas, there's a much bigger influence on him. In May, he was among the special guests at an exclusive party thrown by the arch-conservative oil billionaire Koch Brothers in Palm Springs, Calif.

At the "party," the Kochs outlined a new focus for Republicans, working toward smaller government and deregulation rather than pressing losing social issues like immigration. Cruz, one of the "rising stars" at the event, is an important part of the project.

The Koch Brothers are up to their elbows in the crusade against Obama's health care law. In the run-up to the October 1 start-up of the insurance exchanges, they're backing a campaign to get people to not sign up. For example, a Virginia-based organization with ties to the Kochs is running a campaign of television ads--complete with gynecological exams being performed by a spooky Uncle Sam figure--aimed at scaring off college students and young people.

Meanwhile, the Democrats are more than happy to have fanatics like Cruz attacking them in Congress--it helps them look like they're trying to get something done. Senate Majority Leader Harry Reid declared that the Democrats would reject any attempts by Cruz and others to gut the ACA--but he invited advice from "responsible" Republicans on even more compromises in a thoroughly compromised law.

The Republicans won't get away with defunding the health care law as long as the Democrats control the Senate. But in the meanwhile, they're loading up spending legislation with all their favorite anti-worker, pro-business measures: means-testing for Medicare, medical liability "reform," shredding the federal employee retirement system, eliminating the Dodd-Frank financial regulations passed in 2010, weakening the Environmental Protection Agency, restricting other federal regulators, and expanding offshore energy production.

With Democrats talking tough about the ACA, but showing their willingness to compromise on other questions, who knows how many of these pet projects of the right--most of them considered fringe issues for many years--will make it into the "compromise" that ends this latest crisis.

THE LACK of a real debate over health care has had an effect--opinion polls reflect the effects of the confusion being sown by the Republicans. Some 42 percent of Americans have an unfavorable view of the ACA, compared to only 37 percent with a positive view, according to an August poll from the Kaiser Family Foundation. Republican scaremongering has had a lot to do with that result--but it also shows the widespread misgivings about the real inadequacies that have been exposed about the health care law.

Amid the phony debate about Obamacare, there's a real health care emergency taking place in America. Last year, some 48 million people--about 15 percent of the population--went without health insurance, according to the U.S. Census Bureau. A quarter of people who earn less than $25,000 annually don't have health insurance.

"Reform" as it exists in the Obama health care law--rife with loopholes, compromises and watered-down provisions--won't come close to fixing this gap. The ACA won't confront skyrocketing health care costs or reform the wasteful and inefficient way for-profit health care is delivered.

But the opposition to the law in Washington isn't only about the ACA. We're seeing the same script play out: Intransigent Republicans go on the attack--with or without a majority--and Democrats compromise. For all the flashes of anger and indignation, the good cop and the bad cop end up working together to carry through an austerity agenda that whittles away at the living standards of working people.