Unspoken casualties of the Marathon bombing

As the Boston Marathon is run this year, the media will swell with coverage about last year's deadly bombing. But for all the attention, many important issues weren't confronted then--and they haven't been since.

Khury Petersen-Smith attended the Marathon last year as a spectator. Along with SocialistWorker.org contributor Sofia Arias, he left the finish line are about an hour before the bombs went off. Their article about what they experienced was a powerful response to the tragedies that didn't stop with the explosions. One year later, Petersen-Smith looks at the questions we still need to be asking today.

ONE YEAR after the Boston Marathon bombing, the story arc of the attack and the days that followed remains familiar.

The week began with the horrifying bombing itself on April 15--two explosions ripping through the crowd gathered near the finish line--and built through the day into a manhunt for suspects by heavily armed police.

It culminated several days later in the lockdown of Boston and neighboring cities, the killing of Tamerlan Tsarnaev, and the dramatic arrest of his wounded brother Dzhokhar. "CAPTURED!!!" the Boston Police Department tweeted after apprehending the suspect. "The hunt is over. The search is done. The terror is over. And justice has won."

The Christian Science Monitor's take was echoed across the board in the mainstream media. "Jubilation and relief swell Boston after bomb-suspect arrest," read the Monitor headline on April 20. The article began: "It's been a roller coaster week in the Boston area. After the capture of the Marathon bomb-suspect Dzhokhar Tsarnaev Friday night, people lined the streets to cheer each passing police car." 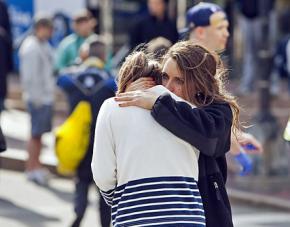 These details are all true. But of course, there is much more to the story. For many people in Boston, not to mention our collective civil liberties across the U.S., the capture of Dzhokhar Tsarnaev wasn't the conclusion of the Marathon bombing saga. It was the beginning of a series of events that wreaked more devastation.

Over the past year, the media have rightly reported the stories of the many individuals who were at the Marathon finish line when the bombs exploded. We heard about heroism and unspeakable suffering.

But much of the other fallout from the attacks has been underreported or altogether absent from the mainstream media. Amid the stories of loss and trauma, and of decency and heroism, precious little has been said about the bitter experiences of Muslims in the aftermath of the bombing, nor the broader assault on civil liberties, carried out in the name of keeping us safe from violence and terrorism.

BOSTON'S MUSLIM community experienced a new wave of hostility and repression, beginning the day of the Marathon bombing itself.

Islamophobia in Boston well predates last year's Marathon, of course. In addition to the repression and racism directed toward Muslims around the country since the start of the "war on terror," powerful anti-Muslim groups in Boston have carried out a sustained assault on the Islamic Society of Boston (ISB). Groups like the misnamed Americans for Peace and Tolerance have used local media to smear ISB mosques as hotbeds of terrorism and to demonize the imam of the ISB Cultural Center, Suhaib Webb.

In this context, it was easy to promote anti-Muslim panic when the Marathon was bombed.

That panic began immediately. When the bombs exploded, a 20-year-old Saudi man was among the wounded. As he ran away from the blast site, a bystander tackled him to the ground. The man was taken to the hospital because of his injuries, but also put into police custody. As Amy Davidson wrote in the New Yorker two days later:

What made them suspect him? He was running--so was everyone. The police reportedly thought he smelled like explosives; his wounds might have suggested why. He said something about thinking there would be a second bomb--as there was, and often is, to target responders. If that was the reason he gave for running, it was a sensible one. He asked if anyone was dead--a question people were screaming. And he was from Saudi Arabia, which is around where the logic stops. Was it just the way he looked, or did he, in the chaos, maybe call for God with a name that someone found strange?

As police raided the man's apartment while he was still in the hospital, Muslims throughout the region were subject to the same kind of suspicion. Verbal assault on the street was common.

While riding the subway on the afternoon of the attack, a Muslim student was knocked to the floor while she was talking on the phone with her parents. As the Gawker website reported, the student, who had called her family to tell them she had survived the bombing, was apparently singled out for wearing a headscarf and speaking in Arabic.

Two days after the Marathon, Heba Abolaban and her friend were physically assaulted by a white man as they walked with their children on the street in nearby Malden. Heba, who is Palestinian, told the Malden Patch that the man screamed, "Fuck you Muslims! You are terrorists!" as he punched her. Both Heba and her friend were wearing headscarves.

The true extent of hostility and violence toward Muslims is hard to gauge because major news agencies largely failed to report on it. Instead, some of the media published speculations and outright accusations toward Muslims that added fuel to the fire. The New York Post devoted its April 22 cover to a photo of a terrified Katherine Russell, the wife of Tamerlan Tsarnaev, running from reporters. The headline read, "DID SHE KNOW?"

THE MEDIA establishment isn't alone in its failure to acknowledge and confront the tide of Islamophobia. Boston's political leaders had an opportunity to speak out against anti-Muslim racism--and did not.

The city had a chance to embrace the Muslim community at the April 18 interfaith service held at the Cathedral of the Holy Cross in Boston's South End. Mayor Thomas Menino, Gov. Deval Patrick and President Barack Obama all spoke, along with religious leaders.

Imam Suhaib Webb, whose ISBCC is the largest mosque in New England, was asked to speak, but was inexplicably replaced at the last minute by a different Muslim speaker--Nasser Weddady of the American Islamic Congress. Weddady is not an imam. Islam was the only faith at the service for which there was no representative of a congregation. Members of the Boston's Muslim community voiced surprise and disappointment at the snub via social media.

Things got worse when it came time to bury the body of bombing suspect Tamerlan Tsarnaev. Both candidates in a special election for U.S. Senate--Democratic U.S. Rep. Ed Markey and Republican Gabriel Gomez--argued that Tsarnaev shouldn't be allowed burial in the state. Officials from the city of Cambridge, where Tsarnaev lived, followed suit and declared that he could not be buried in the city's cemetery.

This coincided with a wave of hate directed toward Tsarnaev's body, once its location in a funeral home in Worcester became public knowledge. Racists lined a chain link fence across the street from the funeral home, with American flags and handmade posters bearing messages like "Send him back home!" and "He was not a U.S. citizen, send him back to where he belongs."

The signs betrayed the fact that this hate, while ostensibly directed toward Tsarnaev as an individual, was actually aimed immigrants and Muslims in general.

No local politician spoke up in defense of Tamerlan Tsarnaev being buried in his home state--his body was interred quietly in Virginia.

ALSO TROUBLING was the lack of any honest assessment of the failure of "homeland security" measures to prevent the Marathon bombing--and the deluge of further repression justified as a response to last year's attack.

The route along today's Marathon has 100 new surveillance cameras added to those that were already there. Their placement is explained as a matter of security.

But the Boston Marathon is arguably the city's largest public event of the year, and last year's Marathon was heavily policed and monitored. Indeed, security was tightest right where the bombs exploded, at the finish line. The fact that the bombing happened despite a large police presence should raise questions about this approach.

Those questions should extend far beyond security plan for this year's Marathon, too. In the 12 years since the September 11 attacks, residents of Boston and other major cities have been subject to greater surveillance, racial profiling, more police, further restrictions on public spaces and routine searches of our bags at airports and elsewhere--all as a regular feature of life today.

Not only have these measures singled out immigrants, Arabs and South Asians, and curtailed all of our civil liberties, but they have failed to achieve their supposed objective: uncover and prevent domestic attacks on civilians.

Similarly, the "shelter-in-place" order issued for Watertown and parts of Boston itself as the hunt for the suspects reached its heights--during which residents were forced to stay indoors while militarized police forces searched block by block for Dzhokhar Tsarnaev--was also a failure. The police searches didn't locate Tsarnaev--it was only after the curfew was lifted that a Watertown resident called police after seeing a blood trail on his property.

Despite this, the state's lockdown was celebrated as a success--and other police departments have had more impunity to use such heavy-handed tactics.

Residents of the largely Black Dorchester section of Boston got a glimpse of the city's more militarized police force last August 7 of last year. In an altercation in which the details are still hazy, two police officers were shot, and cops killed a man suspected of having a gun. In pursuit of another suspect, police shut down a section of the neighborhood, flooded it with officers wielding automatic weapons and brought in armored personnel carriers like those used in the Watertown manhunt.

The state's new impunity following the Marathon attack is evident elsewhere, too, with disturbing consequences. Last May, FBI agents and Massachusetts State Police officers shot and killed Ibragim Todashev while he was being questioned in his Florida home. Todashev, who was not under arrest at the time, was being interrogated about his relationship with Tamerlan Tsarnaev. The authorities have concluded that the killing was an act of self-defense by agents--but the details they have released are conflicting.

Then there is the issue of capital punishment in the Marathon bombing case. Federal prosecutors are pursuing the death penalty against Dzhokhar Tsarnaev, despite the fact that it is outlawed in Massachusetts--and that Boston residents oppose execution in this case by a wide margin.

DESPITE THE year of media coverage and political pronouncements about the bombing, too many of these questions remain unexplored. Police agencies, prosecutors and state officials used the opportunity of the bombing to gain new powers.

But though it has been a dark year in Boston, there are some reasons for hope.

Five days after the racist assault on Heba Abolaban, hundreds of Malden residents turned out for a march and interfaith vigil in solidarity with the Muslim community. The mayor of Malden and religious leaders from various faiths spoke out against discrimination and condemned the racist response to the bombing, along with the bombing itself.

Addressing the crowd, Abolaban said, "I want to thank all of the people who supported me and shared their strength and warm feelings. Your support really helped me a lot and helped me to get over what happened to me."

One year later, we still face big tasks. Among them is establishing anti-racism and solidarity as the immediate response to crimes like this--and mounting a resistance to the increasingly repressive security state. We can't allow our mourning of this catastrophe to be used for a further attack on our rights.